This has not been McLaren’s year. When the 2022 Formula One season roars to a close this weekend in Abu Dhabi, the team will have scored a fraction of the points of its top three rivals in the championship.

But whether 2023 will be any better hinges on a radical plan: McLaren has bought out the contract of eight-time Grand Prix winner Daniel Ricciardo a year early and replaced him with another Australian: the 21-year-old Oscar Piastri.

With Lando Norris as his teammate, it will mean McLaren fields one of the youngest teams on the F1 grid, with an average age of just 22.

“We are extremely excited that we have an experienced and yet youthful line-up moving forward,” says Zak Brown, chief executive of McLaren Racing. “We think Oscar has the raw talent and the dedication to be a future world champion.”

On paper, Piastri certainly looks like a generational talent. He breezed through the junior categories, winning the F3 and F2 feeder championships, each time in his debut season. Normally, top drivers require two seasons at each level: one to learn and a second to win.

If this surprised Piastri, it also seems to have caught out his longtime backers, the French Alpine team, which did not have an F1 car ready for him for 2022, as Fernando Alonso and Esteban Ocon were under contract. So, Piastri has spent this season in a reserve role, which meant no racing, but some valuable testing experience and backroom simulator work.

Meanwhile, as Ricciardo’s form dipped alarmingly, Brown and his F1 team principal Andreas Seidl became aware that Piastri had a get-out clause in his Alpine agreement and pounced. When Alonso stunned Alpine in August by announcing he had signed to Aston Martin for 2023, Alpine initially announced Piastri as his replacement — only for Piastri to rebuff it on social media and reveal he had already signed with McLaren.

F1’s contract recognition board was called in to resolve the dispute and ruled in McLaren’s favour, leaving Alpine empty-handed.

Piastri acknowledges that it is a lot of effort, money and commitment for a high-profile brand, like McLaren, to show to a rookie.

“Motorsport is an incredibly cut-throat and serious business,” he says. “It is a massive show of confidence and faith that made me appreciate their commitment to me, knowing everything that had to go on to make this possible.” McLaren, he says, “have shown time and time again that they’re capable of nurturing young talent” — previous success stories include Mika Häkkinen, Lewis Hamilton and Piastri’s teammate Norris.

Commitment is not only evident on McLaren’s side, though. Piastri has dedicated himself to motorsport for years. After proving as a child that he could compete with Europe’s best talents in karting, he chose to come the UK, alone, at the age of 14.

“My dad said, ‘I’m happy for you to keep doing this’,” he recalls. “‘But you’re going to have to be here full time and you’ll be here by yourself. I’m going back home to mom and your three sisters.’ So I had to make a pretty big call on whether I wanted to stay in Europe or go back home. It’s worked out well.”

Piastri attended Haileybury, a boarding school in Hertfordshire, where he gained A-levels — typically required for university entrance — in maths, physics and computer science, despite a 37 per cent attendance record in his final year, due to international racing commitments.

“It’s definitely made me mature a lot quicker than I otherwise would,” he says. “When you go to the other side of the world at 14 years old, you have to grow up pretty quickly and learn to do things by yourself.”

Piastri comes across as serious and thoughtful — much less of a joker than the driver he is replacing. His record in the junior categories demonstrates an ability to work around problems to unlock the speed that brings results, which is what F1 is all about. Red Bull, this year’s top team, tested Piastri in its simulator before he was picked up by Alpine, but failed to spot his talent, something team principal Christian Horner has publicly said he regrets.

I’ve had this year to get into the F1 mindset. I adopted the lifestyle of an F1 driver, just without driving

Next season, Piastri goes up against Norris, one of the fastest of the new generation of drivers, who will be entering his fifth season of F1 despite being only 23. Although Piastri has done just over 5,000 kilometres of testing in an F1 car, he will be somewhat race rusty after a season on the subs’ bench. But history shows that this is surmountable: it was a forced career move taken by several world champions, including Hakkinen and Alonso.

“I feel reasonably well prepared,” says Piastri. “I’ve had this year to get myself into the F1 mindset. In the first half of the year, I went to all the races, I sat in all the meetings. I adopted the lifestyle of an F1 driver, just without driving.”

Having proved himself in junior categories, he feels that he is “ready now for F1”.

“Obviously, we’ve got a bit of work to do to get McLaren back towards the front, where we want to be,” he adds. “But I’m excited to be part of that challenge.” 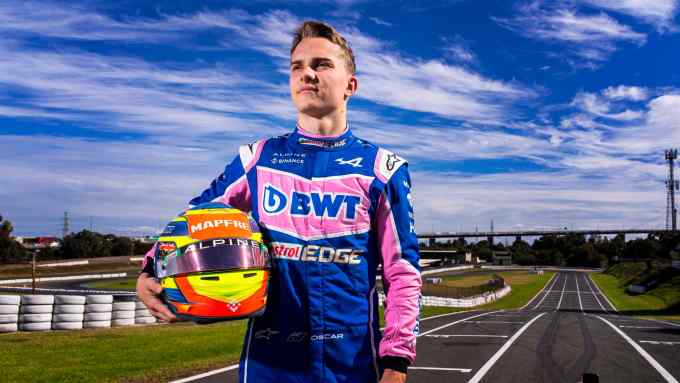