‘Who is going to buy?’ UK set to unleash historic debt deluge

We’ll send you a myFT Daily Digest email rounding up the latest Gilts news every morning.

Investors are preparing for the UK government to unleash a “cataclysmic” flood of debt sales over the next few years, leaving many asking who exactly is going to buy all the gilts — and at what price.

Even after scrapping his predecessor’s unfunded tax cuts — which triggered a bond market meltdown in September — chancellor Jeremy Hunt faces a daunting borrowing task. The cost of subsidising household energy bills, paying for creaking public services as the economy heads into recession, and servicing a ballooning interest bill from past borrowing has set the stage for a half-decade of bond sales that will dramatically expand — and permanently reshape — the £2tn gilt market.

The Debt Management Office — which handles bond sales on behalf of the Treasury — will need to sell an average of nearly £240bn of gilts for each of the next five financial years, according to Citigroup forecasts. That figure comfortably eclipses previous records, with the exception of the vast borrowing during the coronavirus pandemic.

The Bank of England hoovered up the majority of the gilts hitting the market in 2020 with its bond-buying quantitative easing programme, effectively financing the government’s unprecedented borrowing needs. Today, by contrast, a BoE facing runaway inflation is unwinding its more than £800bn quantitative easing scheme by selling bonds back to investors.

“When we have had lots of issuance before you had the BoE there to mop it up,” said Mike Riddell, a bond portfolio manager at Allianz Global Investors. “Now, you could have almost everyone selling. The question is, who is going to buy?”

Robert Stheeman, who heads the DMO, told MPs in October that “from now on . . . net issuance to the market will be the highest in history”.

However, there is little outward sign of anxiety in markets. Gilts have rebounded from the rout in September and October, helped by Hunt’s and new prime minister Rishi Sunak’s plans to restore the public finances to a sustainable footing. The 10-year gilt yield — a benchmark of government borrowing costs — stands just above 3 per cent, having spiralled as high as 4.5 per cent in the pension fund liquidity crisis that followed former chancellor Kwasi Kwarteng’s ill-fated “mini” Budget.

To some analysts, the calm in the gilt market is a reminder that expectations of bond supply have never been the main driver of yields in the developed world’s major bond markets — whose moves can typically be largely explained by changes in interest rate expectations. In any case, the UK is not alone — the energy crisis is expected to spur record issuance across the euro area next year.

Still, some fund managers argue that investors have chosen to focus on the reduction in gilt issuance in the current fiscal year that came as a result of Hunt’s autumn fiscal statement last month, and are burying their heads in the sand over the avalanche to come.

“I don’t think the market has quite come to terms with the scale of all of this,” said Craig Inches, head of rates and cash at Royal London Asset Management. “It’s cataclysmic.”

Ownership of the gilt market is split roughly evenly between domestic investors, foreign investors and the BoE — which has swallowed the lion’s share of the extra issuance as the market approximately trebled in size since the global financial crisis of 2008-09. With the central bank turning from buyer to seller the onus is on the private sector, at home and abroad, to absorb the coming wave of bond sales.

UK-based investors may struggle to pick up the slack. Pension funds have traditionally dominated the longer-term end of the gilt market. The DMO over the past two decades has catered to the relentless demand from so-called liability-driven investors — pension strategies that use long-term assets to match their long-term commitments to pensioners and were at the centre of the autumn’s gilt market chaos. As a result, gilts have a much longer average maturity than other major bond markets — more than 14 years, compared with six to eight years in other G7 economies.

The rapid rise in bond yields in late September sent shockwaves through an LDI industry that had loaded up on leveraged bets on lower rates, forcing investors to sell more gilts to raise cash, creating what the BoE called a “self-reinforcing spiral”. The central bank was forced to step in and backstop the market with £19bn of long-dated gilt purchases, while Hunt’s borrowing U-turn also helped to calm the market.

Now that its liquidity crisis has subsided, however, the sector’s overall solvency is healthier thanks to higher bond yields, according to Daniela Russell, HSBC’s head of UK rate strategy. That could lead to a flurry of demand as LDI managers buy gilts to lock in their improved funding position. However, the longer-term decline of the defined benefit sector — such schemes are mostly closed to new members — means this source of demand will wane, Russell said.

Officials admit that the structure of gilt issuance is likely to have to change to reflect the retreat of an industry that was hungry for gilts no matter the price, with bond sales less focused on ultra-long maturities than they have been previously.

“Over the past 20 years we have had non-economic investors buying because they had to,” said Riddell. “That’s been a subsidy to the UK government, and I think it will get removed. You will see the UK curve become more like everyone else’s.”

That leaves the UK needing to court overseas buyers like never before. Even keeping current foreign ownership levels steady will require much higher demand. If overseas investors were to buy at the same pace in 2023 as they did in 2022, they would only absorb 15 per cent of gilts issued in 2023, instead of their historical 30 per cent, according to Kim Hutchinson, global rates portfolio manager at JPMorgan Asset Management.

Many investors argue the DMO will have to pay for the privilege with higher borrowing costs.

“We are in this brave new world of the BoE determined to reverse QE,” said Quentin Fitzsimmons, a senior portfolio manager at US asset manager T Rowe Price. “That means we’re reliant more than ever on the ‘kindness of strangers’,” he added, referring to former BoE governor Mark Carney’s description of the UK’s dependence on foreign capital flows to finance its budget and current account deficits.

Current UK yield levels are not attractive to global investors, according to Fitzsimmons. Gilt yields briefly surged above those on equivalent US Treasuries during the recent crises. They will probably have to do so again and settle there for the long term in order to attract sufficient foreign buyers, he said.

Shifting sufficient quantities of bonds to investors will also be a test of market infrastructure. Last week there was a gilt sale by either the DMO or the BoE every day, a schedule set to repeat this week. That could become the norm as annual issuance tops £200bn for the next few years, according to Barclays fixed-income strategist Moyeen Islam.

The DMO might be forced to carry out more syndications, in which it pays banks to place large quantities of debt with investors, or increase the size of its auctions, adding to the market disruption caused by supply of new bonds and ultimately forcing the government to pay higher borrowing costs.

“I would say at the kind of numbers we are looking at for the next few years we are at the limits of market capacity,” Islam said.

In his appearance before parliament’s Treasury Committee in October, Stheeman he was very confident of selling as many gilts as the government requires, but added that he could not guarantee the process of doing so would always be smooth.

The coming downturn could actually make his job easier, if it causes the BoE to raise interest rates less aggressively or even cut them.

“Ultimately, if we are in a recession, or if today’s inflation turns into tomorrow’s disinflation, demand for bonds will emerge,” said Hutchinson. 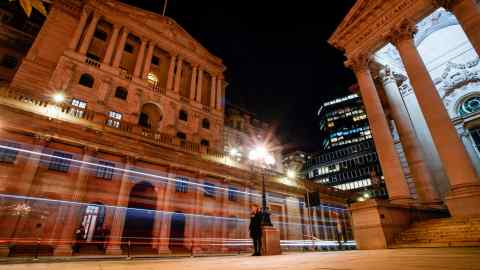 Some analysts argue that it would be wrong to conclude from Kwarteng’s fate that markets are now allergic to large-scale borrowing. Rather, it was the former chancellor’s decision to fire the top civil servant at the Treasury and publish his budget without scrutiny from the official watchdog that undermined confidence in UK economic management.

Hunt, by contrast, has so far been able to get away with his borrowing plans because markets understand the reasons behind them. Rather than announcing tax cuts at a time of high inflation, the new chancellor has been forced into jumbo gilt issuance by a miserable economic outlook and the Treasury’s need to compensate the BoE for losses on its QE portfolio as interest rates rise.

“Numbers are certainly important,” said Islam. “But September reminds us that context matters and narrative matters in markets. You have to have a story that investors are willing to buy.”