What’s a good (and bad) way to leave your job?

We too often fail to manage job endings well. The consequences not only affect the person leaving, but can also harm staff remaining — and the company itself. A client in my psychotherapy practice, for example, could only recall two retirement parties in his 30-year career in banking. “Everybody else either said ‘f**k you’ on the way out the door, or they got fired.”

Departures are uncomfortable and can evoke painful feelings of loss and even grief. Yet while organisations encourage feelings that boost productivity, such as optimism and enthusiasm, they often ignore those which may appear, wrongly, not to produce anything. They may wonder, ‘What is the point?’ and instead choose to bypass the event.

And some individuals, in turn, shy away from endings for fear of embarrassment or being overwhelmed with emotion.

Endings and beginnings, however, are inextricably linked for people — a good ending allows a good beginning. It provides a place to process what was, and prepare for what is to come; to pause and reflect on accomplishments, opportunities taken and missed, relationships forged and broken and, importantly, an opportunity to say goodbye.

A departure also offers a rare moment of intimacy at work where thoughtful words can be said and kindnesses and generosity remembered. People leaving may hear, perhaps for the first time, just how valued they and their contributions were. Such expressions boost a person’s confidence — the warmth and positivity can help them through the initial insecurity and even loneliness in their next job or venture.

It can also be a time to cement relationships — to strengthen contacts rather than feelings of relief at leaving others behind. Such endings benefit companies and organisations, too, by enhancing their reputations as employers and ability to recruit.

Endings also have a deep symbolic resonance with the people who stay. When exits are ignored, or worse, those departing are treated badly, it signals to staff remaining that they, too, are unimportant. This can result in lost motivation and effort, which damages overall collaboration, productivity and performance. What’s more, an opportunity to re-employ talented and experienced leavers in future is missed. Karen Thomas-Bland, founder of Seven, a management consultancy, says that with current pressures on recruitment, many companies are relying on a “boomerang effect”. But if people are treated badly on their way out, they are unlikely to return.

She adds that managers should also consider the impact on their brand of a bad social media review, or word spread around the industry by disgruntled ex-employees. She urges companies to consider: “What experience do you want them to walk out the door with — and what do you want them to tell the next 10 people?” And when people are made redundant through no fault of their own, such as in mergers, those remaining can feel guilty and may wonder why have they survived when friends have been sacked.

What experience do you want [leavers] to walk out the door with — and what do you want them to tell the next 10 people?

Leaving a job is rarely perfect — it is often messy and can provoke a range of emotions, from sadness to relief, or lingering resentments and excitement about new possibilities. This is all healthy and normal, and implies that the job and relationships made were meaningful.

Some endings are more challenging than others, however, as in the case of a client of mine whom I helped cope with a brutal and unfair dismissal by his boss.

My client explained: “[My boss] raised a whole bunch of issues which were essentially fabricated. He invited me to resign and if I didn’t I would be pushed out. When I said that it wasn’t to do with operational aspects, but [rather] how he and I had failed to work together, he had a histrionic fit and stormed out of the office. The head of HR walked me out of the building, took my phone and my pass.

“The overall experience felt more like being a courtier in the court of Louis XIV, where your ability to stay or go was determined by how attractive you were to the king, as opposed to whether you were delivering something credible.

“In hindsight, I realised that fundamentally it wasn’t down to a failure on my part, it was down to someone who was deeply flawed, and in subsequent years since leaving that’s been validated by the success that followed.”

Unless such bad endings are analysed and processed, unfair accusations can become internalised and the person made to feel inadequate. They are then likely to take their aggrieved feelings and project them into their next job, repeating a similar dynamic.

Mark Stein, emeritus professor of leadership and management at the University of Leicester, believes the worst scenario is when someone is unceremoniously thrown out and a non-disclosure or “gagging order” is imposed. It signals to the people who stay that, “I too could face this”.

He gives an example of when a person has only a few hours to leave and their email is suddenly shut down. “It often comes as a complete surprise — with no warning and [they are terrified] about [their] career. The only compensating fact is getting a sum of money for signing a gagging order.

“They are so frightened about jeopardising their pay-off that they don’t speak to colleagues or respond to questions. It’s catastrophic: not only losing the job, but the friendships at work.”

So how should employers handle departures? Above all, treat people with kindness and respect.

Endings need to be marked by rituals to help people move on, but it is important to find out how the individual would like to mark their leaving. Ensuring it is recognised in a positive way reinforces a safe working culture and allows the possibility for future working relationships.

Remember that those remaining will observe how their colleague is treated. Even if the reasons for a departure are unsettling, managers should provide an explanation because secrecy can become toxic, allowing people’s malignant fantasies to run wild.

For leavers, knowing someone else can do your job or that you may be quickly forgotten might be difficult pills to swallow, but this can be eased by valuing your achievements and the good relationships made.

Management
New job? Here’s how to manage the change 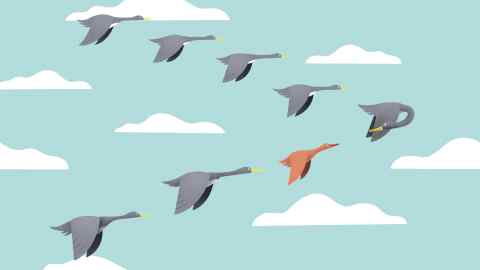 There can also be personal and professional realities that are only confronted when leaving. Another client explains how a good ending from his employer helped ease the blow and accept that a 20-year career was being terminated prematurely because of serious illness. As he puts it: “[It was like] ending the war going on inside me, between my ambitions and my reality.”

A woman who left her job abruptly after being sexually harassed by her boss says: “It’s incredibly sad because I was leaving behind relationships and work that I was passionate about. I cried, I’m not going to lie, but I was having conversations with people which helped me move on. Some people were quite shocked and said they felt bad or guilty. They saw my ending and thought, ‘Gosh, that could be me’.”

A man who sold his business after reaching his financial targets reflects: “There was a sense of, ‘could we have achieved more?’ And of not wanting to burn bridges with my business partners. While we did have our difficulties, we accomplished what we set out to do. That shared experience of achieving success — it’s a bit like brothers, where you fight but ultimately there is a bond. But you also wonder what your employees are going to think of you and how you’ll be remembered.”

How was your experience of leaving a job? Please tell us in the comments