It is the workplace, not women’s confidence, that needs to be fixed

Why don’t women scale the corporate ladder? Poor self-esteem and imposter syndrome — when plagued by anxiety about being a fraud — are the reasons often cited by employers and career coaches. And fixing the women’s workplace confidence “problem” has generated a cottage industry of courses and training programmes.

All of this is part of a broader cultural trend exhorting women to “believe in themselves”, according to Shani Orgad and Rosalind Gill, the co-authors of a new book, Confidence Culture. In practice, it means organisations can urge women to work on themselves. Corporate leaders can avoid introspection and wider problems in the workplace are not tackled.

“Every time we heard talk about inequality [in organisations], you just knew the [idea of] confidence was going to be right behind it,” says Gill, professor of cultural and social analysis at City University, when we talk on a video call. “It’s almost as if inequalities, and gender inequalities in particular, were being explained away by a confidence deficit among women. It’s letting all of these institutions off the hook. And it’s also blaming women.”

Alongside the rise of confidence as an issue in corporate culture, the authors have noted the parallel — and seemingly paradoxical — boom in “vulnerability” as a desirable trait at work and in leadership. It was popularised in 2010 by Brené Brown, the academic whose Ted talks on her research into vulnerability went viral, and who has written several books.

Post-Brown, in recent years it has become par for the course for motivational speakers to confess to failure or feelings of self-doubt. Orgad, who is a professor in the media and communications department at the London School of Economics, tells me, “vulnerability is possible and is allowable only in so far as it can be overcome”. In other words, failure is important if it is part of a narrative that leads to empowerment.

Gill and Orgad started to delve into confidence culture in 2015, collecting evidence such as pop songs (Demi Lovato’s “Confident”) and the rise of the body positivity movement (which they describe as “the body confidence industrial complex”) with its social media hashtags #selflove, #loveyourself #youareenough. This, they say, is exemplified by the diet company Weight Watchers’ rebrand as WW, a wellness group.

They also looked at the booming trade in business coaches who promise to increase women’s self-esteem. This cultural trend, Orgad and Gill write, has its roots in self-help, which emphasises an individualistic approach to life improvement, and also in positive psychology which, they write, “represents a dramatic shift away from ‘problems’ and psychopathology toward a focus instead on how ‘positive’ psychological states such as happiness, resilience, and confidence can be fostered”.

The self-evident value of confidence — and particularly female self-confidence — has been placed beyond debate, treated as an unexamined cultural good that is rarely, if ever, interrogated

The precursor to confidence culture was assertiveness training, popular in the 1980s, which encouraged women to say no and fight back. It was, the authors say, “more focused on surface behaviour and on language rather than remaking the whole self”. They have also observed a shift in feminist language from “equality to empowerment, sisterhood to friendship”.

In the book, they write that “the self-evident value of confidence — and particularly female self-confidence — has been placed beyond debate, treated as an unexamined cultural good that is rarely, if ever, interrogated. In this way, a belief in confidence has come to suffuse contemporary culture, like an article of faith.”

Confidence culture has an impact not just on the workplace, they argue, but on relationships and parenting. Young girls are implored to be confident and brave, which usually stems from modern expectations in western societies that it is a mother’s responsibility to not only act as a role model but also to nurture their child’s self-esteem.

When Covid-19 swept the globe, the pair thought the confidence industry might wither away. “There was some hope that [the pandemic had] the potential to radically rethink these highly individualised [approaches],” says Orgad. But over the months, the two — who live close to each other in north London and went on lockdown walks to thrash out ideas — discovered that the drive to increase women’s self-esteem was blossoming. A turbulent jobs market, furlough, the demands of remote working, and the extra pressure of home-schooling, provided the perfect conditions for the rise of confidence coaches and virtual workshops.

Not that the two authors are anti-confidence. They admit in the book that they are “participants in the confidence cult(ure), for example, repeatedly encouraging our female students to be bold and take up more space in the world, and not to apologise for themselves or preface their remarks with ‘I’m just’ or ‘I’m no expert’”. 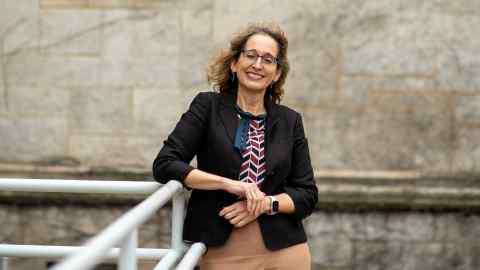 They do, however, want to show that the exhortations that we should be more confident are too individualistic — and let organisations off the hook.

I tell them that I have been struck by the parallels with employers’ new focus on menopause, appointing workplace champions and initiatives to boost menopausal women’s confidence. While this time of life represents real challenges for women experiencing mind fog, fluctuating moods and physical changes, businesses’ current approach could be seen as a way of fixing middle-aged women instead of ageism.

Others have previously questioned the importance of confidence at work. Tomas Chamorro-Premuzic’s 2019 book Why Do So Many Incompetent Men Become Leaders? (And How to Fix It) argues that the trait is often mistaken for competence. As he puts it in the book: “The result in both business and politics is a surplus of incompetent men in charge, and this surplus reduces opportunities for competent people — women and men — while keeping the standards of leadership depressingly low.”

A recent article in Harvard Business Review criticised the concept of imposter syndrome, saying that it took “a fairly universal feeling of discomfort, second-guessing, and mild anxiety in the workplace and pathologised it, especially for women”.

As labour shortages hit many sectors and employers target resources on hiring back large numbers of women who have left the workforce, Gill hopes this timely book will prompt some self-analysis among corporate leaders, rather than asking women to work on themselves. “It’s so not about women’s lack of confidence but inequality and the undervaluing of women.”

Get alerts on Corporate culture when a new story is published