We’ll send you a myFT Daily Digest email rounding up the latest Eating and drinking in London news every morning.

Before I moved to London last year, I’d never eaten at an Indian restaurant in the city, despite having come here almost every summer since I was young. My father worked in Nigeria and I lived with my mother in India —London is where we would meet. For many years, before India became liberalised, we would arrive here with empty suitcases and return with everything we could possibly fit in, from Marks and Spencer underwear to biscuit tins and caviar from Harrods — and VHS tapes my relatives had recorded full of Top of the Pops.

We ate French food at fine dining restaurants (my mother carried miniature bottles of Tabasco in her purse and surreptitiously emptied them over her dishes) and dim sum almost daily in Chinatown. My parents’ glamorous friends who lived in London would invite us to afternoon tea, where my mother and I — both of us having grown up on a steady diet of Enid Blyton books — were enthralled by the drama, the pastel colours, the clotted cream, the etiquette. Both of us looked at the city as a playground, a place to try everything we had grown up reading about.

So it should come as no surprise that, despite having spent so much time here, Indian food simply never made my agenda. Why waste precious time doing something I could easily do at home, where it was probably better?

But then I moved to London — and, serendipitously, my arrival seems to have coincided with a spurt of new Indian restaurants in central London, where I work and spend most of my time. I very quickly discovered that I’d had it wrong. I’d avoided eating Indian food here because I’d only ever known about balti restaurants or a crop of places that tried so hard to refine and adapt the cuisine to a western palate that it bore little resemblance to what we ate back home.

But that’s not what the restaurants I’ve recommended below are about: they’re not necessarily going for homestyle cooking, but are taking the soul of Indian food — its spices and techniques — and layering those in surprising and delightful combinations that I’ve not seen before. These restaurants are doing what they do boldly, with little care for what constitutes “authentic” cuisine in a world where there is no longer one correct answer for anything. These are my favourite restaurants so far, places where even a girl from Bombay can be blown away.

BiBi is my top pick of the new kids on the block. Chef patron Chet Sharma’s restaurant on North Audley Street is named for his grandmothers, but it’s safe to say neither of them would have imagined pairing a traditional nimbu paani (lemonade) with Orkney scallops and a sprinkling of puffed quinoa — a dish both delicate and zingy. The Wookey Hole cheese papad, a dip made of classic green chutney with a layer of melted cheese on the bottom that’s eaten with fried khicha, is so good — and so simple — I wondered why nobody had ever done it before. The okra salan is made with peanuts, something Maharashtrians often do, but here the addition of sesame and chilli is bold and bright. That’s what I most love about BiBi: the flavour combinations are classic, but paired and treated surprisingly without trying too hard.

Sharma takes great pride in paying careful attention to the provenance of the ingredients and spices he sources: almonds from Uttarakhand, pepper from Thalassery, rose petals from Surat, Swaledale lamb chops and Highland beef. I was delighted to discover that even the (organic, vegan) chocolate comes from Puducherry-based Mason & Co, which grows its own beans in south India and has an all-woman workforce. Despite being backed by JKS Restaurants (the group behind Gymkhana and Brigadiers), Sharma hasn’t had it easy: a sudden illness last year left part of his face paralysed, and was followed by a launch in September but early closure due to the spread of the Omicron variant. But BiBi is back open — and destined for success this year. (Website; Directions)

I’ve known owner Samyukta Nair for many years now, when she was involved with her family’s hotel chain, The Leela. Since then, the enterprising thirtysomething has shifted her focus to London, where she runs three restaurants — Bombay Bustle, Jamavar and MiMi Mei Fair — and is already working on two more concepts. In November I enjoyed a Diwali lunch feast at Jamavar, a beautifully designed, sophisticated eatery that serves classic pan-Indian food. Culinary director Surender Mohan, a Leela veteran, also oversees Bombay Bustle, which is where the chefs are able to let loose and cook what seems to take their fancy.

Bombay Bustle offers several much-loved Mumbai classics, such as street-food snacks like kheema pav (minced lamb on wheat bread) and papdi chaat, alongside biryani, Kerala istews, chole bhature and even idli-dosa. The istew is perhaps my favourite: an incredibly light, watery coconut stew with hearty vegetables eaten with rice-based appams, or hoppers. That the idli-dosas are also perfectly made is little surprise, given Nair’s south Indian heritage. But north India’s star dish, chole bhature, is served with equal flair: the chickpeas cooked expertly, with a dash of tea — its rich, dark-brown sauce took me back to Mumbai’s Churchgate station, where we’d scoop it up with flaky, golden bhature and pickled onions.

And while there’s some innovation at Bombay Bustle — a trio of dosas are filled with duck Chettinad and Adipose beef in addition to potato and peas — this is a menu that does not apologise for its mish-mash. These are Mumbai’s most popular dishes — what locals go to eat when they eat Indian food outside their homes — and truly reflective of how cosmopolitan the city is, with its diversity of people from across the nation. Bombay Bustle offers a taste of home in a buzzy atmosphere, and it’s a great place to meet friends for dinner and not feel awkward eating roti and sabzi with your fingers. Wash down your meal with a Colaba, a cocktail of bourbon, amaretto, bitters and jaggery — the hint of sweetness is the perfect foil to the beef pepper fry. (Website; Directions)

Anjan Chatterjee, the chef behind several successful restaurant chains in India (including Oh! Calcutta and Mainland China), teamed up with an unlikely partner for his foray into London: Aditya Ghosh, an entrepreneur and the former president of IndiGo Airlines. Together, the Bengali duo have decided to bring a taste of their motherland to Marylebone.

Chourangi’s design is reminiscent of Kolkata (rattan furniture, black-and-white photographs and ceiling fans), a city dripping in nostalgia with a famous passion for food. Once the capital of British India, Kolkata has always been a trading centre, where British, Dutch, Armenian, French, Portuguese, Chinese and Mughal influences made their way over hundreds of years. Chourangi is named after one of Kolkata’s oldest neighbourhoods, Chowringhee, and Chatterjee’s menu (under the able supervision of culinary director Surjan Singh, aka Chef Jolly) draws from his childhood days growing up there. His recipes for marinades and rubs, even the famous aam kasundi mustard, come from his family home.

Here in London, the dishes are presented beautifully, and the cooking is light, clean and well-balanced — appropriate for the delicate nature of the cuisine. The tiger-prawn malai curry uses coconut in skilful moderation; the hilsa, a freshwater fish favoured in Bengal, is steamed to perfection; the blue-swimmer crab and prawn parcels are seasoned with mustard and gently fried. Save room for the biryani: you will find space even if you are full, as the Kolkata variation is different to what we normally eat in north Indian restaurants. The rice is light and fluffy and the meat flavoured but not heavily spiced, with potatoes and quail eggs thrown in for good measure. I don’t often eat dessert at Indian restaurants, but the sondesh puff is a fantastic version of one of Bengal’s most famous sweets. It’s a beautiful finish. (Website; Directions)

Atul Kochhar isn’t a new name in London’s dining scene but his third restaurant Kanishka (after Tamarind and Benares, where he gained Michelin stars) is devoted to food from India’s overlooked north-east. The region’s states of Meghalaya, Manipur, Nagaland, Tripura, Mizoram, Arunachal Pradesh and Assam (known as the seven sisters) and Sikkim are rich in their unique culinary cultures and traditions and deserve more attention than they receive, both in India and abroad. Generally, north-eastern cuisine relies less on masalas, spices (primarily pepper and herbs) and ghee; fermentation is used for flavour. The most common proteins are pork and fish.

Kochhar draws influence from these regional elements but he pairs them with unexpected ingredients from Britain. The soft-shell crab appetiser is stunning both in taste and visual appeal: crunchy and golden with passion-fruit beads, papaya shavings and peanuts along with a generous wallop of xoriyohor khar, an Assamese chutney of mustard, ginger and chillies. The monkfish, another star dish, arrives grilled and topped with bilahir tok, a tangy tomato chutney, and kol phool (banana flowers) on a bed of creamy sauce. And then there is the goat curry, hot from timur peppers found in the Himalayas, layered with cumin.

Because this is an Atul Kochhar restaurant, you will also find some of his signature dishes, such as chicken tikka pie, but I would advise against ordering those. Instead, seize the rare opportunity to sample a kinema curry, Tripura-style mixed vegetables or Naga-style pumpkin. You won’t be disappointed, and it will open your eyes to the plethora of deliciousness that exists beyond north and south Indian cooking. (Website; Directions)

This Fitzrovia restaurant takes its name from a buzzing Mumbai neighbourhood, a melting pot of immigrants from across the country, many of whom arrive with dreams of making it big in Bollywood. Those are audacious goals to harbour, and Pahli Hill’s chef, Avinash Shashidhara — though originally from the south — has absorbed some of that boldness. His crab sukkha, a typical Mangalorean preparation, where fresh crabs are cooked with dry roasted spices like cumin and black pepper, is thrown into new territory with fennel seeds, chilli and ginger, and eaten with soft buns you can tear into with your fingers. The homestyle fish curry, seasoned with tamarind, features perfectly cooked halibut and mussels.

Downstairs, the Bandra Bhai bar is lively, offering fantastic cocktails with small plates of tasty chaat and grilled kebabs. Neither the decor nor the menu is afraid to be vibrant. On both occasions I visited, the chatter was loud, the crowd were having a good time, and the service was attentive and intuitive. Bandraites would be proud. (Website; Directions)

Divia Thani is the global editorial director of Condé Nast Traveller. She is also part of the jury of CNT India’s Top Restaurant Awards

What’s your favourite Indian restaurant in London? Tell us in the comments 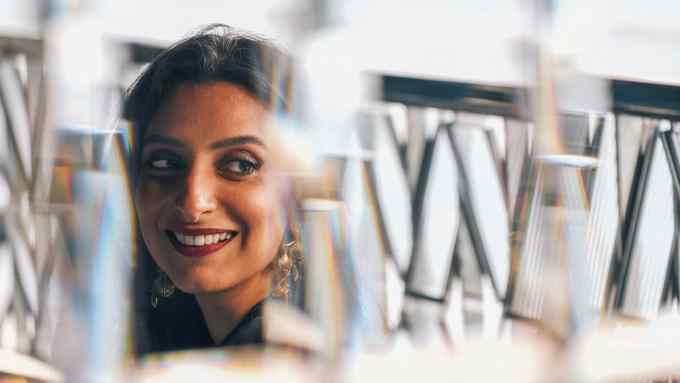