German conglomerate Bayer said that the looming expiry of patents on two of its best-selling drugs will only be a temporary blow, betting that new drugs will rapidly plug the gap in revenues for a company still under pressure to make its blockbuster acquisition of Monsanto pay off.

The company, which sells everything from medicines to weed killer, on Wednesday told investors that sales at both of its key divisions were on track to climb by 3 to 5 per cent over the coming years.

Bayer shares were up 3.3 per cent in afternoon trading in Frankfurt. Shares in the group, still wrestling with the fallout from its ill-fated 2016 acquisition of US rival Monsanto for $63bn, have lost more than 40 per cent over the past five years. The wider German market has gained 50 per cent in the same period.

The group’s overall revenue, which reached €41.4bn in 2020, will climb to between €43bn and €45bn by 2024, Bayer said. It expects that its crop-science unit will win market share as it launches new products.

Its pharma division would only suffer a limited hit from the loss of exclusivity for the blood thinner medicine Xarelto and the eye treatment drug Eylea. The two blockbuster drugs currently account for a third of the company’s pharma revenue.

“In 2024, Bayer anticipates a low- to mid-single digit percentage decline in this division’s sales due to the patent expirations,” the group told investors on Wednesday, adding that the division was on track to “return to sustainable growth” just one year later as new drugs would offset the decline.

Bayer’s head of pharma Stefan Oelrich told the Financial Times earlier this year that the company would soon launch as many as three new drugs with annual sales potential of €1bn after investing heavily in cell and gene therapy. Over the past two years, it spent up to €5bn on acquisitions and partnerships. 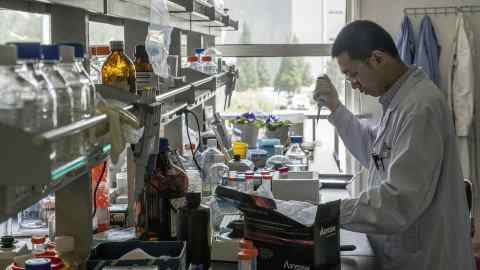 Bayer added on Wednesday that its agriculture unit was on track to gain market share over the coming years. The launch of new, genetically modified soyabean seeds in North America, which will be sold in tandem with a specific weed killer, is expected to be one driver of growth.

The company is also preparing to launch new varieties of genetically modified corn and another variant of soyabeans with are resistant to five different herbicides.

Bayer told shareholders that its annual free cash flow, which fell by 68 per cent last year to €1.3bn, will rebound to €5bn by 2024. However, even that level would be less than the €5.8bn seen in 2016, when it announced the Monsanto takeover that later triggered a shareholder revolt.

When announcing the Monsanto deal in September of that year, the German company said the transaction, which was closed in 2018, would “provide its shareholders with accretion to core earnings per share in the first full year after closing and a double-digit percentage accretion in the third full year”.