The Beirut bar-bookshop with a lot of bottle

The Beirut café and bookstore Aaliya’s Books has weathered a lot in its short life. First the 2019 civil protests, then it was damaged in the blast of 2020 and almost closed in 2021 after a fuel shortage made it impossible to keep the lights on. Not to mention Covid-19.

And yet this shop in the arty Gemmayzeh district has remained, against all odds, a lively cultural hub: hosting book clubs, jazz nights and wine fairs. And, soon, a Lebanese wine bar. Its proprietors are Niamh Fleming-Farrell, a bookseller and journalist from Ireland, and William Dobson, an English teacher – adventure-seekers who came to the city more than 10 years ago and “basically never left”.

“When I arrived in Lebanon only a few local producers such as Ksara and Chateau Musar were visible,” says Fleming-Farrell. “People weren’t championing indigenous grapes. But since then the number of wineries has gone from around 10 to more than 40.”

“It’s partly because it’s become so hard to get stuff in from abroad, it’s forced people to look internally,” adds Dobson. “But there’s also a feeling: now’s the time to believe in Lebanon or leave. And wine is a great hope.”

The 20-seat wine bar and cave, which adjoins the bookshop, hopes to list more than 25 Lebanese wineries, with emphasis on up-and-coming producers. One of those is Mersel, a natural winemaker in the mountains just outside Tripoli that makes amphora-aged skin-contact wines, pét-nats and even a piquette. Highlights from the range I tasted included Mersel Lebnani Abyad, a hazy orange wine made from the Lebanese grape Merwah, and a crunchy red-apple Cinsault called Red Velvet. Both of these will make their debut in the UK with natural wine merchant Les Caves de Pyrene (lescaves.co.uk) later this year. 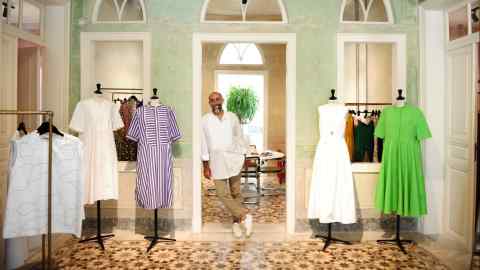 The bar will also stock Sept (available at cavaspiliadis.uk from £39), from Lebanon’s first biodynamic vineyard, and organic growers Batroun Mountain Winery and Les Trois Collines. The house fizz will be from Latourba – thought to be the only winery in the country doing champagne-method sparkling wine. The award-winning Domaine Wardy (from £20, lebanesefinewine.com) will figure with wines from Couvent Rouge, a co-op that incentivises farmers in the Beqaa Valley – where hashish cultivation is rife – to switch from cannabis to grapes.

Aaliya’s monthly wine fairs will continue, fleshed out by tastings and supper clubs, says Dobson. “We’ll be working with local chefs to showcase Lebanese produce.” The Lebanese anise spirit arak will also be “front and centre”. “We want it to be an extension of what we’re doing in the shop, which is creating a space where people’s stories can be told,” says Dobson.