Nigel O’Reilly’s ingenious designs have made him the darling of haute joaillerie circles, as a new Los Angeles exhibition shows

There’s something otherworldly about Nigel O’Reilly’s jewellery, yet its story, which begins in the west of Ireland, is irresistibly down-to-earth. Boy meets girl in a small Galway nightclub. The farmer’s son, with severe dyslexia, who earns his living creating injection moulds for vascular surgery, sets out to impress the art-school student by fashioning a ring from medical-grade steel – and wins her heart.

It was an early glimpse of the daring and ingenuity that has come to define O’Reilly’s art jewels, the subject of a solo exhibition at Sotheby’s LA from 30 November. His highly crafted pieces – currently worn by Saoirse Ronan, Julianne Moore, Maya Hawke and Grace Kelly’s granddaughter – are complex and intellectual yet joyfully rebellious.

That’s what put him in the sights of Frank Everett, senior vice president of Sotheby’s New York, when they met five years ago. Soon afterwards, he earmarked two rings for the house’s Important Jewels sale in 2020 – the first Irish jewellery designer ever to feature. “Sometimes you think everything in jewellery must have been done, but then something really fresh comes along,” Everett says. “Nigel’s a big thinker but there’s a bit of a rocker undertone, and I was instantly taken with him.”

The 40-year-old designer, who is often found listening to Bowie at the bench, cites Alexander McQueen and Philip Treacy as influences. He trained under the late master goldsmiths Rudolf Heltzel and Erwin Springbrunn, considered one of the finest gem cutters in Europe. He then worked for Van Cleef, Stephen Webster, Boodles, Garrard and Fabergé, before returning to Ireland. His – mainly bespoke – business launched in his home town of Castlebar in County Mayo in 2009, with the support of Tracy Sweeney, now his wife and an award-winning artist, and two brothers (one of whom he taught gem-setting himself, the other an engineer) who work in his atelier.

Entirely self-funded – “we could only afford to buy one stone at a time and sell it to fund the next one” – he has pushed himself in every sense. “There’s a lot of ‘you have to do this or that’ in fine jewellery, and one of my guiding aims is to constantly challenge that,” says the father of two. “I like the feeling of ‘it shouldn’t work but it does’; each piece should be electrifying.”

An unusual approach to pavé work, unexpected colour combinations, and his original, sculptural forms are providing thrills for a growing audience of fine jewel collectors. “Nigel has these shapes and forms grounded in medieval jewellery, yet nothing’s too referential – or reverential,” Everett reflects.

The exhibition in Sotheby’s Beverly Hills space showcases a 29-piece capsule collection comprising rings (including the signature De Ville ring with a rotating faceted pink pearl) along with large pendants, a cuff, cufflinks and his eye-popping earrings. 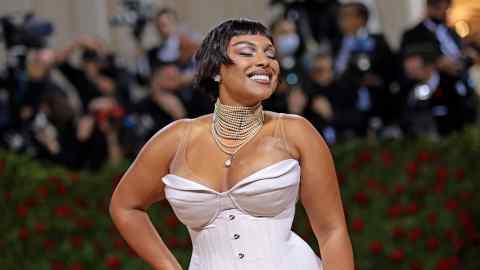 “Earrings are the ultimate in design,” he says. “I love making them big and complicated, but they have to be light – there are a lot of mechanics involved.” His current escapades marry whisper-light titanium bodies with gold through the ear. “I want to keep the viewer, and the wearer, guessing,” he says.

As his jewellery takes him down paths he never imagined, his late mentor Springbrunn – “a Gandalf-like presence” whose stones O’Reilly credits with much of his work’s impact – is ever present. No doubt his own wizardry would have made him proud.