Start a 4-week trial
How To Spend It  Luxury goods

How Foulkes and sons became the Kardashians of cigars

Confined to the “ancestral hovel” in Shepherd’s Bush, the HTSI writer finds solace – and online fame – in a cigar

As the nights draw in, my thoughts turn to Havana: the festive period is associated with celebratory indulgence, chief (if not sole) among which in the Foulkes household is the cigar. Basically, this is because I have given up most other things: alcohol, meat, sugar, gluten, strong language… the passing years have taken their toll on my pleasures until almost all I have left is the fragrant blue smoke of the tobacco of Cuba’s Vuelta Abajo.

Also it is at this time of year that I begin planning my annual visit to Cuba in February for the Habanos Festival of cigars, or at least that is what I would be doing were I going. But Covid has managed to interrupt a cherished tradition.

I first started visiting Cuba in 1995. Like the thrill I still receive on disembarking at Geneva’s Cointrin airport to look at watches, touching down at José Marti airport in pursuit of further insights into the mysteries of The Cuban Cigar is something of which I never tire.

For a while I worked in the wine trade and when I reached my lifetime limit of alcohol, one of my greatest fears was having all that carefully acquired wine lore disappear. Happily, cigars were there to take up the slack. Like wine, the cigar is an agricultural product on which arcane skills, perfected over generations, perform a transformative magic – or, in modern terms, “add value”. Just as with fermented grape juice, so with cigars one can rabbit on about the terroir; come up with abstruse gustatory similes (I was particularly proud to be able to use the adjective “soapy” in an approving way while tasting a selection of proposed blends for new Ramón Allones); and perorate endlessly about methods of planting, cultivation, harvesting, fermentation, maturation… It is, in truth, less of a product and more of a culture; a culture for which I have been particularly grateful during this annus horribilis.

The 2020 cigar year kicked off according to the Chinese zodiacal calendar with a special cigar issued to mark the start of the Year of the Rat. As with all luxury goods, whether classed-growth claret or Hermès handbags, China is a hugely important market, and a Chinese tobacco company has recently taken a 50 per cent stake in Cuba’s cigar brands. It was against this background that the Chinese New Year was marked with the Romeo y Julieta Maravillas 8 (55 ring gauge x 155mm). Bedizened with bands and housed in a varnished box of eight, it upstaged the preceding Year-of‑the-Pig cigar, which had been little more than a re-banded, re-boxed Cohiba Robusto. The pricing was also Cohiba level; even so, if you find a box, buy it – the cigars are worth it.

This was but an amuse-bouche for the banquet that awaited me at the festival in Cuba back in February, which was largely dedicated to the launch of the Romeo y Julieta Línea de Oro, a range of three new sizes of super-luxe cigars for which flotillas of boats had been pushed out.

A week of Romeo y Julieta mania reached its apotheosis with a gala dinner for 1,200 people, where Gloria Gaynor provided the musical entertainment. There was Instagram-friendly scenery aplenty: a castellated, crenellated balcony from which star-cross’d wooing could be conducted, and a flower-garlanded swing for Shakespeare’s famous flower-garlanded swing scene. It was a late night.

After a short doze in my hotel room I packed, had a valedictory cigar and headed to the airport. On arrival in London, one of the people with whom I had been in Havana was hospitalised and within a few days of my return Britain went into lockdown. Thereafter the year in cigars went pretty much like everything else. Up in smoke.

Happily, I still had memories of Havana to console me and, rather more usefully, a small box of Romeo y Julieta Línea de Oro: a blingy casket of red varnished sycamore with gold accents and a bas-relief golden-metal oval medallion set into the lid. The cigars too had been pimped, and came with two bands: a double-sized gold and red band and then a gold foot-band. They had a pleasingly consistent Colorado Claro caramel colour and a silken sheen that seemed to glow when the lid of the box was lifted.

These were cigars that needed to be brought to a wider audience, cigars that needed to be smoked… urgently. My son Maximilian, a qualified Master of Havanas and furloughed cigar merchant, was lounging around the house in Shepherd’s Bush, so I suggested we make ourselves useful, coordinate our wardrobes and “do our bit”. Thus it was, wearing disconcertingly similar tweed suits, that we set fire to a pair of these cigars, while my other son Freddie put his art‑history studies at the Courtauld to good use by preserving this moment of intergenerational male family bonding for eternity (or as long as I can afford to pay for cloud storage) on my iPhone.

The cigars in question were a Hidalgos chunky 57 ring gauge x 125mm and a Nobles 56 ring gauge x 135mm pointy-headed Figurado. After a sweet start, the flavour in both built with notes of fruit and cinnamon and other spices delivered with more strength than the usual Romeo blend. It was, all things considered, a good moment at a bleak time: the light from the low March sun streaming through the window and slicing through the cigar smoke like a 1980s-nightclub laser show piercing a nimbus of dry ice struck me as such an attractive and calming sight that I consigned the short film to Instagram.

And so in a cramped spare room at the back of a careworn, jerry-built Victorian terrace house in a suburban London street, the lockdown internet sensation known as Foulkes & Sons was born.

The video went viral, and such was the encouragement from what I still have trouble describing as the online community that we decided to make them a weekly thing, putting them out on a Sunday evening as if they were some comforting, escapist bonnet-heavy period drama in front of which to eat something off a tray. Dressing up in coordinating outfits, sometimes dinner jackets, sometimes safari suits, sometimes Stetsons, bootlace ties and cowboy boots, we filmed in various locations around what we describe to the viewer (always addressed in the singular) as the ancestral hovel and its sprawling deer park; more accurately (and prosaically), a 5m x 5m fake‑Yorkstone-paved yard. I ransacked my humidors. Sometimes we smoked the stout Cohiba Behike, at other times the slender El Rey del Mundo La Reina. We wrestled with the giant ceramic chess piece that houses the legendary San Cristóbal Torreon and, of course, we sampled the Cohiba Talisman, which I have to report is settling down nicely. Almost immediately we were deluged with a tsunami of lucrative sponsorship offers and within a few short months we have become the Kardashians of cigars… or at least, that is what I would have liked to have happened.

Thus it was, wearing disconcertingly similar tweed suits, that we set fire to these cigars and preserved this moment of intergenerational male family bonding for eternity

In reality, as social-media phenomena go, it was right down there, way below annoyingly perky homemade fitness videos and films of locked-down Italians serenading each other from the balconies of their apartments. It was not even directly helpful inasmuch as, however topsy and turvy the times may have been, smoking cigars to raise funds to save the NHS would have been surrealism so extreme that only a Dalí could have carried it off, even if there is a school of thought which teaches that nicotine is a Covid-basher.

However, our broadcasts did come to the attention of the powers that be at Mark’s Club and in a daring lockdown-busting drive, my sons fired up their scooters and with me riding pillion on Freddie’s 1963 Vespa we headed for Mayfair – not to test my eyesight but to film three socially distanced episodes back to back on the club’s cigar terrace, which, with its sofas, roaring fire and attentive service by Antonino, was something of an upgrade. As restrictions eased, we even filmed at the Vatican of the cigar, Davidoff on St James’s Street, where Max works and where we tasted the 40th-anniversary Davidoff Coronas Especiales.

Encouraged by the response of the thousands who, I am reliably informed by my friends at Instagram and YouTube, tuned in to watch us, we persevered until the end of July, when it seemed that the spectre of Covid was lifting and that our work as overdressed, smoke-wreathed internet sensations was at an end. 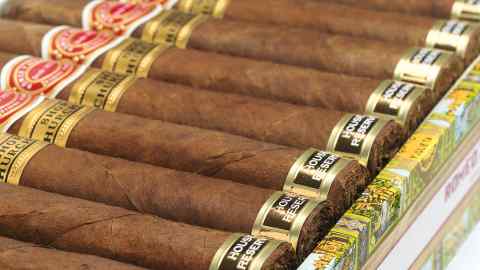 As we now know it was only taking a bit of a breather (if that is the correct scientific terminology when talking of a respiratory disease), so at the end of September we polished our shoes, straightened our ties and sharpened our cigar cutters (including a miniature guillotine presented to us by art adviser Hugo de Ferranti) and returned to social media.

And thus it is, into our second season we accompany our loyal viewer through this dark period and do our best to live up to our motto and mission statement: #fightingthevirusonecoronaatatime.