Laila Gohar celebrates the “coldest night of the year”

I have always existed between two worlds. I am not a chef in the traditional sense, although I can cook. I am also not an artist who makes commercial work. My world lives somewhere in between both. I design immersive installations that blur the line between art and dining. For as long as I remember, I have been obsessed with creating moments of magic around the dining table.

Everybody has the ability to be a great host

I grew up in Cairo where the majority of the population is Muslim, but there is also a sizeable Christian community. My neighbourhood, and school specifically, were very mixed. There were Egyptian Christians and Muslims, as well as lots of foreigners from all over the place. I remember one year when I was about 10 years old, Ramadan, Hanukkah and Christmas coincided on the same weekend. My mother had, unusually, put up a tree in our house that year. My grandma had given me a traditional Ramadan stained-glass lantern that I had placed under the tree. One afternoon I found myself sitting under the tree, spinning a small dreidel that a kid from school had given me. None of it made much sense.

Perhaps this is part of the reason I find it more fitting (and exciting) to throw celebrations based on imaginary holidays. I prefer to borrow bits from here and there, add imagination, and create new excuses to throw great parties. The holidays can be anything you please. Finding delicious tomatoes at their peak in the market on a sweltering August day is a good enough reason to celebrate. So is the first sight of favas in the spring. I once saw a dahlia the size of my head at a flower shop down the road from my house and thought that dahlia badly needed to be fêted.

As it is February and freezing cold, not much is growing where I live in New York City, but that doesn’t get in my way. A very cold night is a great excuse to throw a cosy party. Let that be your starting point when throwing a Coldest Night of the Year celebration. On a freezing night I find myself craving soup. I also think not enough people serve soup at parties. Or make the whole meal centred around soup. Chicken soup is the mother of all soups.

I like to buy chicken from my friend Walter of Shannon Brook Farm at Union Square Greenmarket in New York. Talk to your butcher and have them recommend a good chicken for soup. When you’re serving just one food, it’s especially important to source the best-quality ingredients you can find. A good bird will make a delicious soup. A not-so-good bird will make a not-so-good soup. This may sound obvious, but seems often to be overlooked.

Consider this a loose guide, not a recipe. Season a chicken generously with kosher salt, and bring to room temperature. Put it in a large pot with a peeled onion, half a head of garlic, some parsley and bay leaf. Cover the entire thing with water and bring to a simmer. Let the chicken cook for an hour and a half. You can go longer if you feel it is needed. Go by feel, not by the clock. The liquid will be golden. Remove the chicken and let it cool, then carve into pieces. I like to serve them with peeled carrots, potatoes, and celery cut into large chunks, and boiled directly in the stock, as well as a finely minced salsa verde and aioli. To plate, I place either a leg or breast in each guest’s bowl, along with a couple of vegetables, and then ladle the soup on top. I finish each dish by spooning salsa verde into the bowl, and a generous dollop of aioli onto the piece of chicken.

I believe that everybody has the ability to be a great host, but at times people get caught up with the cooking and overlook some of the other equally important elements, such as the decor and table setting, the music and the drinks. With flowers, don’t be afraid to play with scale. In the winter I use oversized branches since many flowers are out of season. For this instance, I found local quince branches. I also collect bits and pieces of fabric from my travels that I use as tablecloths. Any piece of fabric large enough to fit your table can be made into a tablecloth. For the Coldest Night of the Year, a more casual striped blue cotton fabric would be a nice juxtaposition to the fine à jour stitch dinner napkins, sterling-silver platter and porcelain tureen. A mix of high and low elements makes for a more eye-catching table. When it comes to drinks, a nice dry and crisp champagne is not only a good pairing with chicken, but also feels like an exciting and unexpected combination. 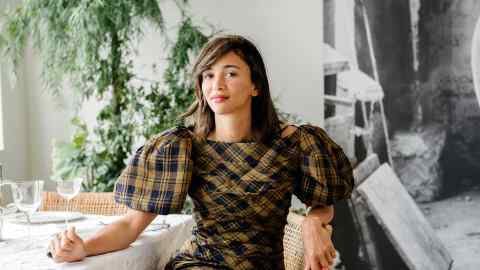 The most important thing about hosting is to remember that people are there to spend time with you, so do not obsess over any of these elements and have them take you away from your guests. A true host is a person generous enough to give a piece of themselves. And giving yourself means giving time to sit and enjoy the people you love. All good parties are thrown for that reason. Every occasion (whether make-believe or not) is simply an excuse.