Titled “Something to make you smile”, the email from art collector Lisa Perry contained a photo of a Niki de Saint Phalle sculpture. The exuberant, blue-bodied figure, recently installed in Perry’s Villefranche-sur-Mer garden, was shown in close-up, centred on its bountiful, swimming-costumed bottom. “Niki did everything with humour,” says Perry from her Long Island home, where she has a second Nana – the joyfully bright and giant-sized sculptures of women (“Nana” being slang for girl in French) and fantastical animals that the French-American artist began creating in 1965.

“I just love her strong women and her feminist approach,” continues Perry, a former fashion designer who in May opened Onna House, a gallery space in a modernist Hamptons home dedicated to the work of women artists. “She was one of the first female monumental sculptors. She was really a pioneer.” Today, after a retrospective at MoMA PS1 last year – de Saint Phalle’s first major museum show in the US – her work is highly coveted again, from her outsized Nanas to more accessible prints and lithographs, as well as jewellery in gold and enamel.

She was always at the centre of the avant-garde circles

Born in 1930 in Neuilly-sur-Seine, just west of Paris, de Saint Phalle spent most of her childhood in New York and was a successful fashion model in her teens and early 20s. Self-taught as an artist, she worked first in painting, then assemblage, becoming friends with the likes of Jean Tinguely (later her second husband), Robert Rauschenberg and Jasper Johns. “She was always at the centre of the avant-garde circles,” says Jill Dawsey, co-curator of Niki de Saint Phalle in the 1960s, currently on show at the Museum of Contemporary Art San Diego – the city she lived in for the final 10 years of her life. “The early works, from 1960 and 1961, are incredible: dense assemblages in between painting and sculpture. The largest piece [in the show] is nearly 11ft tall. It’s a composition of found objects – everything from a rollerskate to a vacuum cleaner to a metal panel from a car. But then it had aerosol cans hanging in front of it and the whole thing was shot at with a rifle.”

Part of a series titled Tirs, these performative “shooting paintings” made de Saint Phalle’s name. “In 1961 she was one of the best known artists in Europe,” says Dawsey’s co-curator Michelle White. “And then, after three years, she starts making colourful, curvaceous women that defy all genres of art making.” The Nana sculptures were first made in cloth or plaster over a wire frame, then in polyester resin. “They use joy in a defiant, rebellious way,” says White.

“De Saint Phalle’s obsession from the mid-1960s was to create sculptures that one could walk into and inhabit,” says Fabienne Stephan, curator of Joy Revolution at New York’s Salon 94 (now LGDR, which represents the artist’s estate alongside Vallois in Paris). The show coincided with the MoMA retrospective and combined large-scale works with tabletop-sized pieces and prints. “Creating smaller objects and editions was a way of fundraising. The economy of Niki was like: ‘OK, I’m building the Tarot Garden [her vast public sculpture park in Pescia Fiorentina, Tuscany], so I’m going to do a perfume.’ She was one of the earliest artists to work in this way and it enabled her to be completely free and independent in her vision.”

For most collectors, a Nana is no-doubt the pièce de résistance. “They’re hard to get, though,” says Perry of the artworks that are mostly in museum collections and sculpture parks, and hold de Saint Phalle’s auction record: $1,136,000 for Ana Lena en Grèce at Sotheby’s in 2006. When Christie’s offered the 3m-high bird-esque fountain L’Oiseau Amoureux in its 2020 selling exhibition of outdoor sculpture, it “sold in excess of $600,000 from its former home on the edge of Lake Geneva”, says Adrien Meyer, head of private sales, adding that this year’s sale (online until September) will include the Fontaine aux Nanas (fond noir). This year’s Christie’s results for smaller pieces, meanwhile, indicate rising interest. In April, an Upside Down Lady vase with a €10,000-€15,000 estimate fetched €65,520, while the characterful Thoëris – Hippo Lampe (Bleu) more than tripled its low estimate of €50,000 to realise €176,400.

“Her prints are completely wonderful and still affordable,” says Stephan. At Parisian print specialist Place des Arts, they are perennially popular. “Especially the big ladies and the jungles,” says co-owner Raphaël Schwarz, noting rising prices since 2020. Limited-edition prints from her 1970 Nana Power series are still available (from £1,683), alongside two Jungle lithographs (from £2,104). 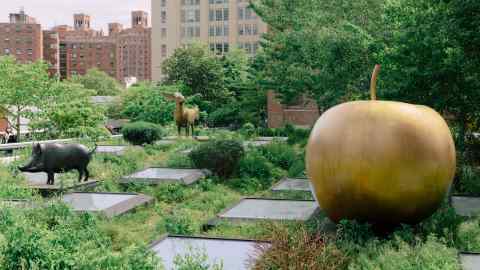 Another sideline was jewellery. “Some of it that comes up at auction was just made out of tin,” says Louisa Guinness, a dealer focusing on artist’s jewellery. “The pieces I’m interested in were all made by Milanese jeweller GianCarlo Montebello in gold and enamel.” Priced from £14,000, the necklaces, brooches and cuff links feature de Saint Phalle’s signature symbols – snakes, hearts and, of course, Nanas. “I have a necklace of a Nana with a brooch of a man attached to her foot,” says Guinness. “I recall Montebello telling me that it was important to Niki that the man was below the woman. You can also detach the man.”