Words and photos by Esan Swan

About an hour south of Oslo, near the mouth of the River Glomma, hundreds of thousands of salmon swim in cold, dark depths.

But they are not in the ocean or in the river. Instead, these salmon survive in enormous circular pools at a land-based fish farm in the former whaling town of Fredrikstad, where they are raised from juveniles to full-size adults.

Roger Fredriksen, the production manager at Fredrikstad Seafoods, moved to southern Norway to join the company five years ago.

“It’s been a really exciting journey because this is totally new,” he says.

The Scandinavian country is the world’s second-biggest exporter of fish after China, with sales increasing by 72 per cent between 2008 and 2018. By 2050, the country plans to produce 5m tonnes of salmon and trout a year, nearly five times its current volume.

Globally, aquaculture accounts for 52 per cent of the seafood eaten around the world and, since 1990, production has risen more than 500 per cent. But, while its carbon footprint is appealingly low — accounting for less than 0.5 per cent of greenhouse gas emissions in 2017, according to one study, compared with 14.5 per cent for livestock — it can cause severe damage to marine environments. Among the problems are chemical pollution, escaping fish, and the spreading of diseases and parasites.

Land-based aquaculture has been praised, however, as it is more sustainable and less harmful to the environment than conventional fishing and sea-based fish farming. Some have even billed it as the future of sustainable seafood because of its smaller carbon footprint and potential proximity to markets.

RAS technology, of the sort used at Fredrikstad, provides a controlled environment for the fish. The water in which they swim is passed through a filter that cleans and recycles it into the tank system without the waste, uneaten feed and ammonia naturally produced by the fish.

The company uses saltwater from the nearby River Glomma, which is pumped in and cooled before it enters the RAS. Salmon are acquired as smolt — juvenile fish which, in the wild, would be preparing to migrate from rivers to the sea — and raised in circular pools in two warehouse facilities.

The fish, about 280,000 in total, spend their entire lives in these tanks without ever going to the ocean, a practice that is still being tried and tested in the industry, Fletcher says.

The salmon are typically cultured for two years, explains Fredrikstad chief executive Bernt-Olav Røttingsnes. They are then harvested, processed and transported by truck to customers in Oslo and neighbouring countries, all within a 12- to 24-hour radius.

“We don’t think that land-based [aquaculture] is something you should place very far away from the market,” Røttingsnes says.

While some see land-based aquafarms and RAS as a sustainable way forward, critics worry about the amount of energy and resources required, the wellbeing of the fish, and the feed being linked to deforestation.

In Norway, 93 per cent of the electricity generated comes from hydro power; however, in regions where renewable energy is less accessible, such as in parts of the Middle East and in the US, these energy-intensive facilities can have a much bigger carbon footprint, Fletcher points out.

Røttingsnes does not see this as a problem for Fredrikstad. “Yes, of course, there are pluses and minuses, with the land-based energy consumption [being] a minus for land-based,” he acknowledges. “But then putting the production close to the market makes up for it,” he adds.

Nordic Aquafarms, the parent company of Fredrikstad Seafoods, also has a plant in Denmark that produces yellowtail kingfish, and is planning two new farms in the US, in Maine and California. It says it intends to buy renewable energy or to install solar panels to reduce the carbon footprint.

Green party MP Ramus Hansson, who sits on the business and industry committee in Norway’s parliament, agrees that land-based aquaculture has the potential to be sustainable. But he adds that, because the aquaculture industry as a whole is so big, it is important to consider what the fish are fed.

“Feed is imported from Brazil and other places like that and there [are] the well-known issues about deforestation etc connected to that,” he explains. “There is no basis for calling the feeding of that industry sustainable at this stage.”

Røttingsnes says Fredrikstad’s feed comes from Europe, and emphasises that energy consumption and fish welfare are also important to the company.

Currently, land-based fish farming accounts for only a small fraction of global aquaculture. Although this is unlikely to change quickly, owing to a skills shortage and the difficulty of finding sites with the necessary water and transport infrastructure, the long-term outlook is promising.

“Everything that’s happening now with climate change, the focus on how we live in the future, will make people more aware of where their food is from,” Røttingsnes says.

Get alerts on Fishing industry when a new story is published 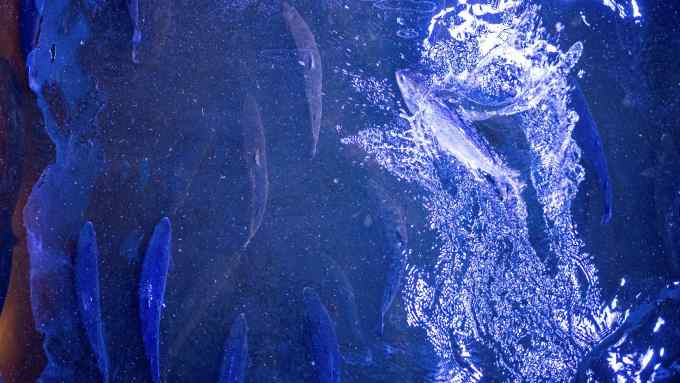