The art of the greenhouse

When it comes to building outdoor spaces, it’s no pane, no gain

“When I ordered it, I was told that Prince Charles had bought the same design for Highgrove – only his is smaller,” says Nigel Metcalfe of the Victorian Grand Lodge he commissioned from glasshouse specialist Hartley Botanic in 2018. Measuring 60ft by 18ft, Metcalfe’s lodge incorporates a canopied area and pergola; it has a frame made from powder-coated aluminium and is equipped with colour-matched, remote-controlled lighting specifically designed to promote photosynthesis. It all cost around £70,000. “I made acquiring a greenhouse an absolute priority after selling my business,” says Metcalfe, former owner of a scientific contract research company. “And I think it has proved to be the best money I’ve ever spent. My grandfather had a glasshouse and I used to love going in there and watching him at work – and now my own grandchildren come into mine, help me with what I’m growing and grow things of their own.”

Beyond being a warm place in which to cultivate plants, fruit and vegetables, glasshouses are increasingly being used as outside rooms. “We’ve seen people introduce living, relaxation, lifestyle and even dining elements into their glasshouses,” says Tom Barry, CEO of Lancashire-based Hartley Botanic. At Chelsea Garden Show in 2019 the company set up its Victorian Lodge glasshouse with an alfresco dining area and styled its Hartley 10 as a meditation and yoga space. Its glasshouses have also been used as an artist’s studio and a medicinal herb laboratory.

We fantasise about being able to grow pineapples again

The glasshouse became a part of British culture during the Victorian era – but the origins of using such structures to protect plants and produce from the elements date back at least to the time of the Roman Emperor Tiberius, who was recorded by Pliny the Elder as consuming something “cucumber-like” (probably a type of melon) on a daily basis on the advice of his physicians. The habit required the vegetable to be moved into the sun on “beds mounted on wheels” and, in cold weather, to be stored in frames called “specularia” that were glazed with transparent stone.

Glasshouses became a regular feature in the British garden in the 19th century when factories started to be able to manufacture larger quantities of glass. It led to the building of giant structures such as the 1848 Palm House at the Royal Botanic Gardens, Kew (which now has a partnership with Hampshire-based glasshouse manufacturer Alitex, supplier to the National Trust). But prior to the Victorian era only the wealthy few were able to indulge in a glasshouse – among them the Bishops of Durham, whose two-acre walled garden at Auckland Castle featured glasshouses dating back to the mid-18th century.

The castle and grounds now belong to city fund manager Jonathan Ruffer who, together with his wife Jane, is working on the restoration of the walled garden. The couple have commissioned a 20m-long glasshouse as part of the project, which is being overseen by landscape architect Pip Morrison, the man behind the Kensington Palace memorial garden created to mark 60 years since the birth of Diana, Princess of Wales.

“Auckland Castle’s walled garden is said to have been incredibly productive, both because it’s situated on a geothermal hot spot and because the bishops were sufficiently wealthy to be able to afford the most up-to-date heating systems, which could be run using the masses of coal that came from the County Durham mines,” says Jane Ruffer. “We can’t replicate the original glasshouses, but we do fantasise about being able to grow pineapples again.”

To create the one-off structure, the Ruffers turned to the French glasshouse specialist Serres et Ferronneries d’Antan, based near Blois in the Loire Valley – the firm responsible for the dramatic glasshouses at Somerset hotel The Newt. They are one of the few companies to use bespoke steel frames, all of which are built in a manner reminiscent of the style of engineering associated with Gustave Eiffel.

“We only work with steel and glass in a really old-fashioned way to make the type of glasshouses that were popular towards the end of the 19th century and at the start of the 20th,” says Christophe Bossuat, owner of Serres et Ferronneries d’Antan. They employ 18 people, including draughtsmen, welders and fabricators, and make glasshouses that can start from around €10,000 but can cost up to €500,000 for a building of around 300sq m. It takes up to four months to create the structure of a glasshouse, and as much as six more weeks for the building to be assembled at the site. “The previous owner of the business did not speak English, so customers were mainly from France and Belgium – but we now sell all over the world to clients as far afield as America, South Africa and the Middle East,” he says.

“Glasshouses have moved to the top of many of our clients’ wishlists,” agrees garden designer Kate Gould. “A high-quality glasshouse ultimately adds style to any garden scheme – and it can be customised to be used in many different ways. We’re being asked ever more often to design spaces for people to ‘grow their own’ and it’s possible to create areas to do so in even the smallest of plots.” Regardless of size, and whether for producing food or merely decoration, an elegantly designed glasshouse can bring light into anyone’s life.

FT Series
The joys of a spring garden 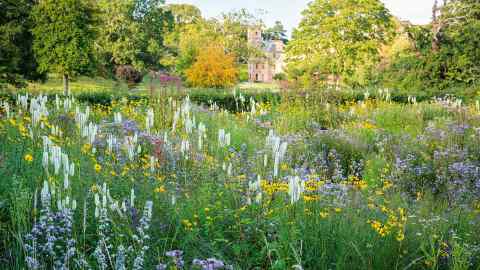 Get alerts on Gardens when a new story is published