Get limited time offer
How To Spend It  Wellbeing and fitness

Ruby Wax: ‘It’s like my thoughts have been arm-wrestling with me’

The writer and broadcaster explains why she spends it in silence, and why mindfulness is a balm when times get tough

When my brain gets over-cluttered, which is something that usually happens shortly before I finish writing a book (something I’ve just done), I make a deal with myself. I tell my brain, “OK, I’m going to do six all-nighters working to get it finished and burn out this engine, but I promise at the end of it I’m going to take you away and let you clear.” This is something I have learnt to do over the years. In the old days I would have just pressed the turbo button and then crashed. Now I take myself to mindfulness retreats and put myself into total silence.

Mindfulness is like a workout for the brain. It strengthens your ability to lower stress, can dampen down those sometimes self-critical thoughts and helps you focus your attention where you want it. So to be clear: I may be silent at these retreats, but I’m focusing on doing 12 hours of mindfulness, so there is always somebody talking me through the discipline of it. I follow the doyens of the practice like Jon Kabat-Zinn, Jack Kornfield and Joseph Goldstein – the big guys to follow. I go to different places for up to two or even three weeks – they are lovely spaces, set in nature, but they aren’t fancy spas: the Insight Meditation Society in Barre, Massachusetts, and Spirit Rock in California are both famous. There are also places I go in Europe – recently I went to Gaia House in Devon and there is a wonderful one in France called Moulin de Chaves. These are the A-list of retreats but they are very inexpensive; they have integrity in a space where so much has been taken over by charlatans. I pay about £100 per night for food and lodging and if you feel like you want to contribute more at the end, you can.

The first four days in silence are hell

I’m not a Buddhist, and although mindfulness has a lot of its roots there, what we do is not meditation. Kabat-Zinn took mindfulness to the west and reinterpreted it for people in chronic pain. Mark Williams, now emeritus professor of clinical psychology at the University of Oxford, adapted it for people who were suffering mentally. Mindfulness gives you a better hold on how to deal with the obstacles in life.

I’m not into the next fad for some invisible healer. I have seen the results of mindfulness at Bangor University, when I had my brain scanned before and after a retreat – and it’s pretty impressive what happened. The part of your brain that gets alarmed and switches on the cortisol (linked to your “fight or flight” instinct) is what makes so many people burn out. But when you do mindfulness and you sit with your thoughts and don’t run from them, that part of your brain deactivates. The cortisol starts to ease off, your heart comes back to its normal beat and your blood pressure goes down. I really like that that can happen but, boy, does it take discipline. You can’t wake up one morning and do a triathlon, and it’s the same with this.

For me, the first four days in silence are hell. I am listening to my thoughts and it’s as if they want to kill me. They are shouting at me about what I did wrong when I was five and why my mother thought I was an idiot. Then, after about four or five days, they give up. It’s like they have been arm-wrestling with me, or that I am a mother who’s been watching her kid have a tantrum.

How To Spend It
How I Spend It: John Cooper Clarke on how Elvis ‘out-punked everything’ 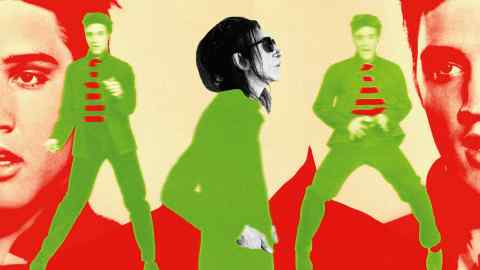 Gradually, things start to ease off and eventually I let go. I begin to notice things. One of the first things is that the taste of food becomes incredible. And when I’m eating, I don’t have to have a mundane conversation with the person next to me about what they do. We all just sit there adorably in silence, enjoying our food. I like having the people around me, but I like that they are also busy enjoying their own food. The atmosphere is extraordinary: people are at their best, letting you in front of them in the queue, or if they feel you want the salt or pepper they hand it to you. I fantasise about who they actually are. Sometimes I’ve imagined that someone is a murderer and in the last five minutes of the retreat as we are all leaving I find that they are, in fact, a Harvard professor.

A Mindfulness Guide for Survival by Ruby Wax is published in paperback by Welbeck at £14.99. When Ruby Wax Met..., a retrospective of Wax’s most high-profile TV interviews, is available on BBC iPlayer