Why should I let my landlord spy on my finances? Demanding online access to your bank accounts for 90 days to scrutinise your income and expenditure. Calling your boss to verify your salary. Asking for an accountant’s reference and copies of your tax returns.

No, I’m not talking about the level of financial scrutiny people can expect when applying for a mortgage. These checks are becoming the norm for tenants trying to rent a property in the aftermath of the pandemic.

“To get a new place to live, I have to allow the new landlord’s reference checking company to spy on my bank account for 90 days,” says Michael Wright, a journalist and freelance writer.

The property market in his area of Norfolk is red hot due to the “race for space” and the staycation boom, which has seen many traditional lets convert to Airbnbs.

At the same time, lockdowns have accelerated the move away from providing paper copies of bank statements towards digital services powered by Open Banking, which allow consumers to share their financial data with fintechs authorised by the Financial Conduct Authority.

To stand any chance of renting close to their child’s school, Wright and his partner reluctantly agreed to be digitally vetted.

For 90 days, they consented to share data, including their account balance, details of all incoming and outgoing transactions (most banks hold one or two years’ worth of data online) plus any fees, charges or interest they’d incurred. 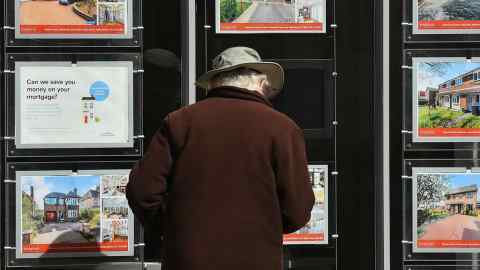 Although this verified that the couple had a joint income of well over £60,000, self-employed Wright was deemed a “moderate risk”. The letting agent has also demanded to see copies of his tax returns. And all this for a monthly rent of £980!

Property expert Kate Faulkner says tenant referencing and credit checks are nothing new, but the pandemic experience has made buy-to-let landlords even more paranoid about the risks of rental default. Rental insurance is harder to come by and policy costs have soared.

“Landlords will also check affordability for other costs such as council tax and heating,” she says, adding that some tenants have had issues with damp “which turns out to be because they can’t afford to heat the home”.

Even at the higher end of the market, the self-employed and singletons are considered especially risky.

My self-employed Instagram followers tell me they’ve been asked to provide six months’ rent up front, landlord references, accountant’s letters, tax returns and up to one year’s worth of photocopied personal bank statements.

As we heard on the Money Clinic podcast, single accountant Jenny was passed over for several flats in Leeds as landlords said they’d prefer to rent to a couple with a dual income. Increasingly, tenants can’t rent a property unless they are backed up by a guarantor. One FT Money reader agreed to do so for a family member who is a single parent. He passed a credit check, showing he owned his own property. Days later, his boss received a phone call asking to confirm that he worked there and what his salary was.

However, the providers of digital tenant referencing services claim that Open Banking is much more secure and accurate than old-fashioned methods — and actually involves less intrusion into our private lives.

“No, your landlord won’t be able to tell whether or not you ordered Deliveroo last week,” says Chris Hutchinson, chief executive of Canopy, one of a growing number of FCA-authorised apps. “As an intermediary, we only surface the information that’s needed to make the decision,” he says.

Typically, this will be a PDF report verifying your income for the past 12 months, the rental payments you’ve made and your projected level of affordability.

“None of that security exists with sharing paper copies of payslips or bank statements,” he adds.

Freddy Kelly, founder of Credit Kudos, which provides the tech for an array of rental apps, argues that Open Banking could make landlords feel more confident about letting to “gig economy workers, small business owners; anyone who lacks a recurring salary payment”, plus those whose credit history has been affected by working overseas.

Algorithms can separate discretionary and non-discretionary expenditure; score the consistency, regularity and longevity of a renter’s income; and use this to calculate a monthly “affordability threshold”, which is all the landlord sees.

More accurate than a credit check, customer volumes have increased seven-fold during the pandemic.

In theory, digital services are quicker, easier and less intrusive — but they also enable landlords to cherry pick tenants with the equivalent of a triple A credit rating. I’m already hearing reports of would-be tenants being financially screened before they get selected for a viewing.

Campaigners say the balance of power has shifted too far.

“Landlords have so many ways of checking who their prospective tenants might be, but there’s currently nothing allowing tenants in England the same privilege,” says Polly Neate, chief executive of Shelter, the housing charity.

Scotland, Wales and Northern Ireland already require landlords to be registered — but England does not. Neate says a national register would be “a simple solution to a very serious problem” — the number of renters who don’t know who their landlord is.

“We deal with people every day who don’t know how to contact their landlord, request repairs or challenge them,” she says, adding that local authorities also struggle to track down repeat offenders.

This isn’t just a problem at the cheaper end of the rental market. An FT colleague is renting a flat in a fashionable part of London where an unfixed leak is causing water to drip directly on to her pillow. She reported this to the letting agent three months ago. Nothing happened. She asked to speak directly to the landlord and has been stonewalled.

Shelter’s research estimates that 22 per cent of renters have moved into a property with smoke alarms, central heating or water supplies — all essential, legal requirements — that don’t work. Yet one in five renters don’t complain through fear of being served with a no-fault eviction.

So I have a challenge to throw down to the Open Banking providers. Please can you make an app that allows renters to check whether landlords have enough capital to finance unexpected repairs promptly? It would be handy if this could also show an “affordability indicator” of how much they’re relying on the rental income to fund their personal everyday expenditure.

Sadly, I fear renters may face a long wait for this kind of innovation and the prospect of regulation is also slipping back.

Last month, the government said the renters’ reform bill, which promised to tackle many of these problems, would be delayed until next year.

When you consider how many MPs have portfolios of rental properties, I cannot help but wonder whether they really understand the plight of renters — or merely have an interest in preserving the status quo.