Short sellers enjoyed returns of more than 9 per cent from their bets against star investment manager Cathie Wood’s flagship exchange traded fund in September, as the fund suffered its worst monthly outflows on record, data show.

S3 Partners, a financial analytics company, said that by October 5 short sellers had made $407m in net mark-to-market profits since the beginning of the year — a return of about 21 per cent. Their $237m profit last month equated to a return of 9.2 per cent for September alone.

Altogether, investors pulled $905m from the Ark Innovation ETF (ARKK) contributing to a decline in assets under management of 13 per cent from $22bn at the end of August to $19bn at the end of September, data from TrackInsight show.

The performance marks a significant departure from ARKK’s fortunes in 2020, when it attracted net inflows of $9.56bn and rewarded investors with returns of more than 150 per cent.

Net flows have turned positive again in October and the fund has seen net inflows of around $5.7bn year to date, according to TrackInsight, but long-term investors have had to weather a decline in the fund’s market price of 14 per cent in the year to October 4. This compares with a positive return of about 13 per cent for the Invesco QQQ ETF, which tracks the Nasdaq 100.

Industry participants expect more rocky times ahead. Data from S3 indicate that short interest in the ETF remains at record levels of about 12 per cent.

Short sellers speculate that the price of a security is likely to fall and seek to profit by paying a fee to borrow shares, sell them, and then repurchase them at a reduced price before returning them. High short interest is a sign of pessimism among professional investors. If that then spreads to retail investors, short selling and redemptions are likely to be correlated, with a time lag.

IHS Markit, a data provider, said the average borrow cost for ARKK constituents was about 200 basis points, equivalent to $2 for every $100 of stock borrowed. However, units of ARKK currently have an annualised borrow fee greater than 600 bps.

“If the cost of borrowing an ETF temporarily spikes, this is likely to be due to a short-term short position taken by a market maker, for example, whereas a long-term high cost of borrowing compared to the underlying securities indicates this is much more likely to be investors speculating on the price of the ETF falling,” said Matt Brennan, head of investment management at AJ Bell, an online investment platform and stockbroker.

“Such a gap is an extremely rare occurrence,” said Vincent Mortier, deputy chief investment officer at Amundi Asset Management. “What that is telling you is that there is genuine short interest in this ETF.

Elisabeth Kashner, director of global fund analytics at data provider FactSet held a similar view: “The most obvious interpretation of the short interest is that people are betting against Cathie Wood . . . The borrowing cost of ARKK is subject to the same market forces as anything else.”

Ark Invest did not respond to requests for comment. However, in August when news broke that Michael Burry, made famous in the film The Big Short, had made substantial bets against ARKK, Wood took to Twitter to defend her strategy saying he did not understand the “innovation space”.

Despite Wood’s conviction, investors’ ardour has cooled since the beginning of the year. “The scale of short positions [here] demonstrates that people think the ETF is overpriced,” said Izzo. 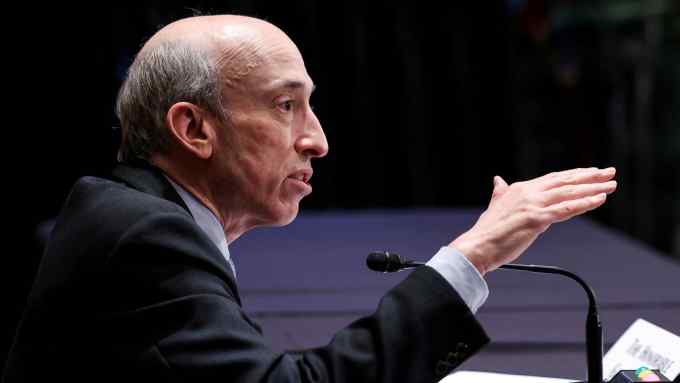