We’ll send you a myFT Daily Digest email rounding up the latest Football news every morning.

The leaders of Europe’s top football leagues have attacked plans to restructure the Champions League, pitting them against Uefa, which runs the lucrative competition, and raising the stakes in a long-running battle for power.

Executives from England’s Premier League, Spain’s La Liga and Germany’s Bundesliga rounded on Uefa, European football’s governing body, criticising proposals which they said would give an advantage to the wealthiest clubs.

Speaking at the FT’s Business of Football summit in London on Tuesday, Javier Tebas, the president of La Liga, denounced a “culture of under the table deals” within European football and said that Uefa’s plans would generate more money for the biggest clubs but less for national leagues.

Richard Masters, the interim chief executive of the Premier League, said the proposed changes risked pitting national leagues and the Champions League against each other.

If the race for the Champions League [within national leagues] is off, that harms the value of every league across Europe

Christian Seifert, chief executive of the Bundesliga, said the proposals were “not good for football”.

The plans to recast the Champions League are the product of months of talks between Uefa and the European Club Association, which represents the interests of more than 200 teams across the continent.

The ECA is chaired by Andrea Agnelli, who is also the chairman of Juventus football club.

The most controversial of Uefa’s proposals would severely limit entrance to European football’s premier competition, with only a quarter of places available to teams based on their domestic success. The remaining 24 spots would be allocated to teams already in the Champions League.

By limiting access, the changes would ensure that participation payments for playing in the Champions League — which this season were more than €2bn — remained in the hands of two dozen or so elite clubs.

“If the race for the Champions League [within national leagues] is off, that harms the value of every league across Europe,” said Mr Seifert.

Uefa was not aiming to reform, but to create “a new competition”, said Mr Tebas. “We are talking about professional football in Europe that is different to what we know,” he added.

The proposal was the most developed of a number of ideas presented by Uefa to European football league officials earlier this month.

“I adore the Champions League. Before changing it I would think twice, or 100 times,” said Zvonimir Boban, Fifa’s deputy secretary-general, speaking at the same event.

England, Spain and Germany boast the three biggest leagues by revenue. The Premier League, La Liga and the Bundesliga recorded combined revenues of almost €11bn in the 2016/17 season, according to Deloitte. The Premier League alone accounted for almost half that amount.

Uefa’s proposal to increase the number of European games threatens broadcast revenues across the three leagues, which totalled €5.7bn in the 2016/17 season.

Mr Masters announced on Tuesday that the Premier League had increased its revenues from international broadcast rights by 30 per cent, from £3.2bn for the last three seasons to £4.2bn for the next three. 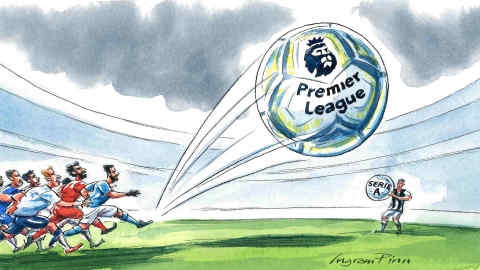 PSG, which is owned by the state of Qatar, broke transfer records by signing Brazilian footballer Neymar for €222m in 2017. Manchester City has significantly outspent rivals in the English Premier league since being taken over by Sheikh Mansour bin Zayed al-Nahyan, a member of Abu Dhabi’s ruling family, in 2008.

Manchester City are under investigation for breaching Uefa’s Financial Fair Play rules, which seek to prevent clubs from spending unsustainably.

With vast spending reserves, the clubs had distorted the market, said Mr Tebas, adding: “The problem with PSG and City is they’re state-run clubs: one off petro-money, one off gas.”

Get alerts on Football when a new story is published