Fifteen sculpture parks, installations and alfresco spaces to enjoy around the world

Sculpture In The City, London

This annual exhibition uses the urban landscape of the Square Mile as a rotating, evolving gallery space, running from Liverpool Street’s Bishopsgate to Fenchurch Street Station Plaza. For its 11th edition, work from 19 artists will be spotlighted. Kicking off proceedings is Jocelyn McGregor’s Earthing, now on display at Aldgate Square, a tactile piece featuring hybrid creatures such as giant snail shells with human limbs or cross-legged snakes.

The spot where Edvard Munch allegedly found his inspiration for The Scream, nestled in woodland overlooking east Oslo, Ekeberg Park offers staggering views of the city alongside a vast collection of world-renowned public art. Visit on a Sunday to catch a viewing of James Turrell’s mystical light installation Ganzfeld: Double Vision, built inside an old 1920s water reservoir; or book a sunrise or sunset private at one of his fabled open-top Skyspaces.

The Bass Museum of Art, Miami

In Charo Oquet’s I Am Here: Translation of Mystic Symbols in an Age of New Subjectivity, curved pipes and flat sheets of metal are precisely cut and assembled to create a four-sided sculpture that perches proudly on a stone plinth. The Dominican-born, Miami-based artist draws on rituals and ceremonies from the Caribbean diaspora for this, her latest work. Building on the question “what is a monument?”, I Am Here will be the second piece in the New Monuments series initiated in 2020.

Charo Oquet is at The Bass Museum of Art, Miami, until January 2023

The Photographers’ Gallery’s new open-air cultural space is a permanent addition to the exhibition programme, located beyond the walls of the gallery. The Soho Photography Quarter (or SPQ), which will focus on solo artist presentations twice a year, launches with Christian Thompson’s Being Human Human Being, with light projections, soundscapes, hanging banners and a 45-metre-long frieze by the contemporary Australian indigenous artist.

The working vineyard, dining destination and luxury hotel, already home to a hoard of sculptural and architectural gems, is now showing London-based artist Annie Morris. Her largest piece to date, a six-metre bulbous bronze Stack sculpture (designed especially for the grounds of the Château), will become the newest addition to the park’s art trail. Other examples of Morris’ work – including tapestries, drawings and paintings – will go on display in the newly opened Oscar Niemeyer Pavilion, which overlooks the rolling Provençal countryside.

Annie Morris at Château La Coste, from 27 June until 22 September

Coiled serpents, a pair of tortoises and a mound of plaited hair emerge from five bronze baskets set around Museum Hill at the Storm King Art Center in upstate New York. Here, in part of the park’s 500-acre grounds, is where eight nature-inspired sculptures by Kenyan-born artist Wangechi Mutu are being displayed. Alongside this, an installation by artist Brandon Ndife, which fuses domestic items – tables, chairs, headboards, and bedposts – using foam and resin, is shaded under the canopy of a maple tree on the grounds.

Sustainability and sculpture meet on Setouchi

Fourteen of Setouchi’s 350 islands, dotting the Seto Inland Sea, welcome contemporary art for the 2022 triennale. With a focus on restoring the surrounding seas and working with local communities, the event aims to draw people to the less-frequented Japanese region in order to discover its distinct cultures, rich history and stunning landscapes. Island-hoppers are met by Yayoi Kusama’s red pumpkin at Naoshima’s Miyanoura Port, or Akira Ishii’s steel sculpture on Honjima Island that evokes the ancient voyage of the Kanrin Maru, the first ship to sail from Japan across the Pacific and back.

Setouchi Triennale in Japan, from 5 August to 4 September; and 29 September to 6 November

A new Mecca for artwork?

Hoping to become “the art Mecca of the Middle East,” Qatar has expanded its Public Art programme ahead of the football World Cup later this year. The peninsular state is installing 40 new commissions by Qatari and international artists. Isa Genzken, Bruce Nauman and Katharina Fritsch will join the likes of Damien Hirst, Sarah Lucas and Richard Serra in locations across Doha and beyond.

Qatar Museums’ Public Art programme in Qatar is open throughout 2022

Tuscany with a twist

In this sculpture trail mapping various villages and towns in Tuscany, contemporary art dots the centuries-old landscape. Thus, in Poggibonsi you can see various Antony Gormley sculptures as well as Mimmo Paladino’s I Dormienti, placed in the 13th-century Fairy’s Spring; in San Gimignano, a large chrysalis by Anish Kapoor sits in the San Agostino Tower; and in Colle Val D’Elsa, Sol LeWitt’s Concrete Blocks are placed in the garden of the medieval Palazzo Pretorio. The entire not-for-profit scheme by Associazione Arte Continua, which has been running for 32 years, is the brainchild of art dealers Mario Cristiani, Lorenzo Fiaschi and Maurizio Rigillo, the trio behind the acclaimed Galleria Continua.

The Lalannes get the perfect backdrop

A gilded apple, a bronze wild boar and a flying rabbit are perched on the leafy rooftop of the Kasmin Gallery in Chelsea, New York. Part of a new exhibition of works by the French artist couple, Les Lalanne: Au Grand Air features surrealist bronze sculptures alongside metal works exhibited inside Kasmin’s 28th Street location. Mirroring the verdant gardens of the home studio where Les Lalanne worked for more than 30 years, the display is set against the backdrop of Zaha Hadid’s biomorphic building, the High Line and the Hudson River, celebrating nature and art in the concrete jungle.

Shaded under dappled light in an old-growth beech grove, Tracey Emin’s six-metre-long bronze female sculpture I Lay Here For You gives its name to the latest opening at Jupiter Artland. Exploring themes of love and hope, and spread across the park’s 100-plus acres of meadow, untamed woodland and indoor gallery space on the outskirts of Edinburgh, the exhibition brings together sculpture, painting and works on paper, both old and new, by one of Britain’s most famous contemporary artists.

In 1986, when sculptor Mark di Suvero turned an abandoned landfill site in Queens into a public art space, little did he know that Socrates Sculpture Park would still offer one of the most important intersections of art, nature and social justice more than 35 years later. Following her first exhibition there in 1988, New York-based artist Maren Hassinger returns to the park with a new series of steelworks in the form of vessels; her larger-than-life skeletal frames, which visitors can walk among, become viewfinders of the city’s skyline.

Visitors are greeted by Franz West’s candy pink sculpture as they arrive on the main deck of Hauser & Wirth’s Menorca outpost on the Illa del Rei. Just a short boat ride from Mahón port, the island’s trail of six sculptures includes creations by Spanish masters Joan Miró and Eduardo Chillida, and one of Louise Bourgeois’ eerie arachnids, all integrated into the Piet Oudolf-designed landscape.

The Outdoor Sculpture Trail at Hauser & Wirth, Menorca, throughout 2022

This Brazilian museum, some 60km south of Belo Horizonte, made headlines this month following a sizeable donation of more than 300 pieces by its founder, Bernardo Paz. A number of the gifted works will be shown in the gallery’s current exhibition, Acervo em Movimento (Collection in Motion), which opened with outdoor installations by Arjan Martins and Laura Belém.

While Martins’ sculpture fuses windsocks with nautical flags, and references the transit of enslaved people across the ocean, Belém’s spotlight-equipped rowing boats flicker on and off, facing one another on the museum’s lake. They join a collection that already has some knockout outdoor pieces. 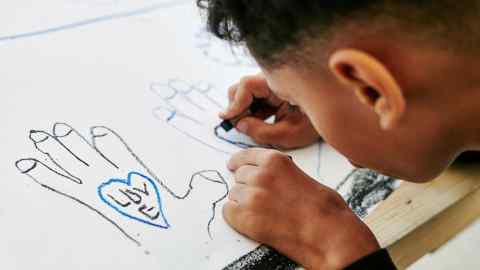