David Thewlis: ‘The messier a page is, the better it usually is’

The actor and novelist on the joy of vintage typewriters

It used to be that typewriters were one of the only ways to get anything down. Almost every great book of the 20th century was, of course, written on a typewriter. And that was my ambition as a child, to be a writer. So a typewriter was just a practical tool to do what I needed to do.

In the 1990s I met a woman who was an early adopter of the computer. She convinced me that I should have a laptop, that I should get rid of my old-fashioned typewriter, and in doing so I’d be able to write more productively. She taught me how to type, paste, drag and drop, and I did indeed find it more productive – until a few years later.

Cut to 2007 and I received a call from the American novelist Paul Auster. He told me he’d written something for me, a film called The Inner Life of Martin Frost, about an author who was finishing a book. Paul is pretty old-school. He still writes everything on a typewriter, so he got me to use one during filming. That was a fantastic machine. The ones I’d had before were from WHSmith or Ryman. But Paul’s model, an Olympia SM9, was like playing a beautiful piano, and I got very good at typing. I even asked him to get me one for my hotel room so I could work on my novel – inspiration seemed to come quicker when I used it.

After we finished filming I found a similar-looking typewriter on eBay. I realised you could get them cheaply at that point – often between £3 and £5 – so I started buying one every week or so. Some would be awful, terrible; I’d chuck them out or use them as plant plots. But every now and again I’d find one that was almost perfect. I learnt how to repair a few things and got to know the best makers – the Olympias, Hermes, Underwoods and Remingtons. But I was always in search of that Rolls-Royce.

Today I have about 40 typewriters, from the ’20s to the ’90s. They’re all very good ones, and they’re all rather beautiful. But I do actually use them – I wrote parts of my new novel on one, simply because I don’t like to sit in front of a screen for too long. You don’t feel energetic enough at a computer. I handwrite most of the time, but I take too much pride in my handwriting to be quick; I’m a bit fancy. The fastest way of getting my thoughts onto the page is by using a typewriter. So that’s what I do.

I like all the mistakes, the smudges and the spilled ink

As with instruments, different typewriters have different temperaments, and part of the pleasure of writing on one is the feel of it. It’s a machine; by using it you become part of its engineering. Some are more pleasurable to write on than others – Olympia Travellers are good for practicality, as are the Hermes Baby models. But none of them is perfect; there’s always something better about one than another. And sometimes it’s as simple as saying, “I’ve got a blue one and a green one, and today I feel like blue.”

Often I’ll look to see what other writers have used, as I know they’ll have done their research. Carson McCullers wrote on an Olivetti – I have one, it’s all right. Jack Kerouac had a Hermes 3000, which is probably the most beautiful. I also own an Imperial Good Companion, the model favoured by John Lennon. But I’ve never owned one that belonged to anyone famous, although I do often wonder who wrote on my typewriters before me. Sometimes they come with little clues. Nothing scandalous, though, just letters or poetry.

How To Spend It
How I Spend It: Massimo Alba dresses Bond, but his heart belongs to Fellini 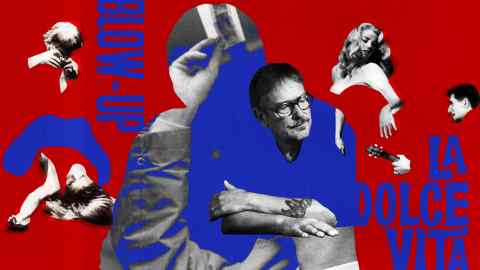 People ask me, “But what if you make a mistake?” I tell them that it doesn’t matter, that mistakes are part of the process. Then they usually tell me how slow it must be (it’s not). And anyway, good writing isn’t about speed. You don’t say, “How fast did you write that?” You ask about how bloody good it is! I like all the mistakes, the smudges, the crossings out and the spilled ink. I’ve got a few copies of old manuscripts – some Woolf, some Wilde – and I love to see what was written first and what replaced it. The messier a page is, the better it usually is.

I still haven’t found Paul Auster’s Olympia SM9, the holy grail of typewriters. I’ve found ones that are knackered and broken, but models in good working order are rare, so I don’t go scrolling through eBay like I used to. Enough is enough. It would be weird if I got more. In fact, it’s already weird – I store my 40 in the attic. And they’re heavy, you know. I should be worried about my roof coming down.

Shooting Martha by David Thewlis is published by Weidenfeld & Nicolson at £14.99