‘Factory of the future’ offers new blueprint for manufacturers

BAE Systems’ facility in north-west England has been assembling military aircraft for more than half a century, including the Eurofighter Typhoon. And today, an old hangar on the sprawling site has been turned into a test bed for efforts to build the next generation of combat jets.

The British defence champion has created a “factory of the future” at Warton, Lancashire, to experiment with robots and advanced manufacturing techniques to make test structures for the Tempest — a combat aircraft for the Royal Air Force scheduled to take to the skies from 2035.

The project is still in its concept phase but the challenge for the companies involved — including aero-engine group Rolls-Royce, the UK arm of Italy’s Leonardo, engineer Siemens and dozens of smaller suppliers — is to develop and build a fighter jet in roughly half the time of previous programmes.

To achieve that will require a “radical change” in the design and manufacture of combat aircraft, says Dave Holmes, BAE’s technology and manufacturing director.

Increased levels of automation will be critical. The use of a “digital thread” all the way from the concept engineering phase through to manufacturing will provide real-time data and visibility as work progresses. “That is not available on anything we have done before,” Holmes explains.

At one end of the factory, engineers are close to completing a demonstration model of the aircraft’s front fuselage using new robotic technology. BAE and its partners used standard robots but improved their accuracy ten-fold in order to help build the prototype. Once complete, the front fuselage will mark a “significant stepping stone”, Holmes says.

The trial, according to Holmes, aims to answer the following question: “Can we all work the same digital data, can you use robots that get the accuracy you need, can you capture the DNA of every activity all the time?”

BAE’s factory is typical of efforts around the world to imagine what the factory of the future will look like. Whether it involves robotics or 3D printing, the goal is to make manufacturing processes more efficient, less energy-intensive, and less expensive.

The coronavirus pandemic has only quickened the trend towards automation and greater digitalisation, as companies have realised that they could not always rely on employees being present on the shop floor.

Ben Morgan — research director at the University of Sheffield Advanced Manufacturing Research Centre, who has worked closely with BAE on its factory — points to the UK’s success in developing NHS ventilators at speed as an example of what can be achieved. An industrial consortium of companies managed to “manufacture ten years’ of ventilators in only ten weeks”, he notes.

Overall, the Covid-19 crisis has “accelerated people’s thinking on digitalisation”, Morgan says. Rather than people “thinking about it, they’ve had to do it”, he adds — citing the use of simulation to map shop floor processes, so that people could be socially distanced, as a key example.

Mark Maybury, chief technology officer at Stanley Black & Decker, the US manufacturer of industrial tools and security products, also turned to technology at the start of the crisis. Maybury developed a “digital dashboard” for the company’s different sites that showed which employees were sick, which were not, and what the prevailing risk level was.

The company also deployed smart sensors in its factories that would alert workers if they were getting too close to others during the height of the crisis. 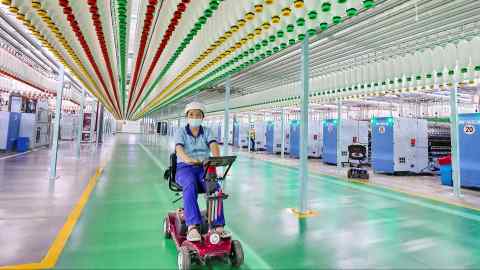 Automated factories will generate large volumes of data. For many, the ultimate goal is to link all of it — from robots, sensors and other factory equipment — so that every stage of the manufacturing process can be closely monitored. The result is that engineers will be able to change tools or change processes as they go along, allowing for greater efficiency.

In an ideal world, companies would connect with customers’ systems to anticipate demand and automatically adjust production. This could create seamless manufacturing and potentially allow processes to be advantageously scheduled at certain times — for example, when energy is cheaper.

In the UK, engineers from the AMRC are leading an initiative dubbed the 5G Factory of the Future to test next-generation wireless connectivity in manufacturing. The aim, says Morgan, is to capture data and use artificial intelligence and machine learning to go “from hindsight to developing insight and, ultimately, foresight”.

“We want to be able to predict what will happen in a process prior to it happening or prior to a tool breaking down or a robot tracking down a path that we don’t want it to track down,” he explains.

A more agile way of working will also allow companies to test designs and modify them accordingly, as they go along — ultimately reducing the qualification or certification time needed for products to be passed to customers.

News in-depthFT Series
Where have all the workers gone? 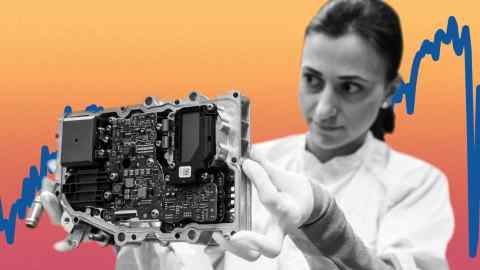 Despite fears that increased automation will destroy jobs, many manufacturers are emerging from the pandemic warning of a shortage of skilled workers. A report last year by Deloitte and the Manufacturing Institute found that the pandemic had worsened the skills shortage. It estimated that the skills gap in US manufacturing could leave as many as 2.1m jobs unfilled by 2030.

Executives admit that some manual jobs will most likely disappear by 2050, but more technicians, data scientists and engineers will be needed as new technologies develop.

Stanley Black & Decker’s Maybury insists there is “real potential” in using automation. Manufacturers, he says, will not only need to redesign their plants but also their jobs. This will require ensuring that people are taught the right kind of skills, such as robotic welding and advanced analytics.

“Our vision is we want operators to work with robots, to maintain them and to engineer and design them and ultimately, to oversee human and robotic teams,” he says.

Get alerts on Aerospace & Defence when a new story is published 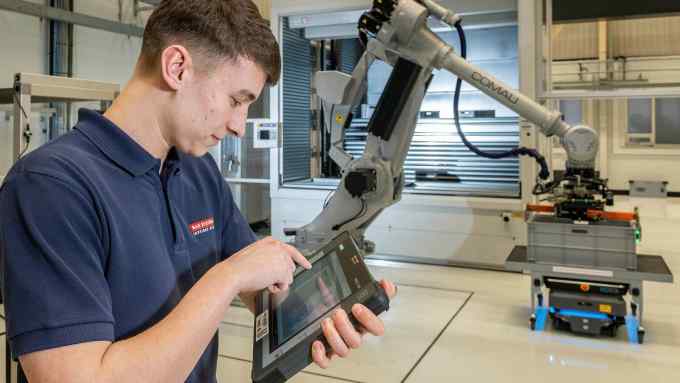