If you were the creative director of a grand Paris jewellery house looking for an iconic new motif, the humble coffee bean wouldn’t be top of your list. Yet it was for Cartier’s Jeanne Toussaint, creative director and working partner of Louis Cartier, back in 1938. Its Grain de Café jewellery – jingling with little bean shapes in yellow gold with convex polished backs, textured, ribbed fronts, and many tipped with a diamond – became a playful favourite in the war years and on through the ’50s and ’60s, worn by stars of the day from Grace Kelly to Audrey Hepburn.

It then disappeared from Cartier’s oeuvre – to finally return now. The new, currently six-piece Grain de Café collection, just launched this week, is as playful as its forebear and intended, as the original was, to be part of a woman’s daily wardrobe rather than preserved for special occasions.

“Jeanne insisted on what modern women wanted, in a jewellery world then dominated by men,” says Pierre Rainero, Cartier’s image, style and heritage director. “She saw that women wanted bigger-volume daytime jewellery to go with suits in thicker materials for the working world. We already had everyday motifs, such as the nail – originally a square-headed horseshoe nail from the late 19th century and later the curved carpenter’s nail of Juste un Clou – so it wasn’t unfamiliar as an idea.” Europe was also under the shadow of impending war and the design was, he says, “perhaps an attempt to lighten the mood, just as comic musical theatre flourished at the same moment”.

The decision to reintroduce the motif now is not, says Rainero, due to today’s interest in midcentury design with its emphasis on yellow-gold jewellery, nor current economic and political instability: “We make our own way rather than following trends – but something in the air may enter the equation.” In recent years Cartier has placed growing emphasis (especially in the area between high jewellery and more manufactured ranges such as Love or Clash) on its heritage in gold-led jewellery, alongside the diamond and platinum art deco and belle époque styles with which it is so associated.

Louis Cartier always said ‘a good idea is another idea’ – ie where can we take this?

This is in fact some of Cartier’s most creative jewellery, now under the domain of Marie-Laure Cérède, the creative director of watchmaking who has recently added this area of jewellery to her remit. She has hopes that Grain de Café will be received like the fine-jewellery range Cactus, which was launched in 2016 and also surprises, based on a fat, round little succulent that in nature sports bright starry flowers, and created with gold, diamonds and coloured stones.

“It’s not so formal,” says Cérède. “You can stack and mix pieces for everyday, though technically our gold work has the same standards and savoir faire as high jewellery.” Each bean – slightly more elegant than the original – is suspended independently from a delicate-looking but strong chain that weaves a white and a subtle yellow gold. This was the hardest technical part, says Cérède, “because the same chain that must hold a ring rigid has to sit flexibly in a necklace”.

The beans move a little, and rattle lightly as they do. Apart from diamonds, the only stone so far is deep obsidian, creating very realistic, shiny, grooved “beans” on a double ring, one of the two rose-gold pieces. Asked what comes next for the range, both Rainero and Cérède smile inscrutably but promise extensions to the collection in the new year, with the second phase launching next June. “Louis Cartier always said ‘a good idea is another idea’ – ie, where can we take this?” says Rainero. If 1950s additions to the original, midcentury styles are anything to go by, stones from faceted, coloured sapphires to opaque turquoise or coral will feature.

The Aesthete
Jeweller Solange Azagury-Partridge: ‘Being glossy takes too much time!’ 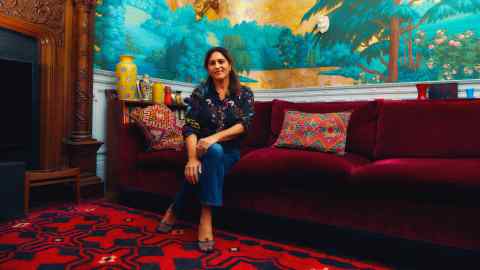 Meanwhile, the pieces are satisfyingly substantial and handcrafted-looking, with a price range starting from £6,150. They are available at selected Cartier flagship stores but the best place to view them is unquestionably the famous Rue de la Paix boutique in Paris, just reopened following a two-year renovation including a new, semi-circular five-storey atrium and a top-floor invitation-only “residence”. Every detail as finely thought through and crafted as this latest collection.