Start a 4-week trial
How To Spend It  Gadgets

Eco tech for a smarter planet

As the owner of a smartwatch that has gathered dust in a drawer for months now, I am a common statistic. Around three in 10 smartwatch owners abandon their devices when they tire of having to charge them.

Sequent, a young Swiss brand, has a fix: it makes smartwatches that, like a traditional automatic watch, are fuelled by wrist movement so need never be plugged in. It’s carving out a market niche and the Elektron, its latest electricity-saving design, cuts a dash with a titanium case, glow-in-the-dark hands and a gently curved sapphire-glass case (take your pick of shades; my money’s on the all-black dial, case and strap combo). Its dial displays heart rate and step count and, via an app, provides GPS tracking and data on sleep and blood-oxygen levels. This unfussy specimen is slightly heavier than lots of other sporty watches, which I quite like, and although you won’t get email notifications, a flashing LCD screen or other typical smartwatch perks, gaining access to key health stats with a mere flick of the wrist seems like a decent compromise. Sequent Elektron, from £499, sequentworld.com

A phone charger with pulling power

If you’re about to go bush, and the thought of a dead phone and no power-point access makes you feel queasy, leave room in your hiking pack for this portable power bank. Weighing 0.6kg and boasting a brave violet-and-grey colour scheme, it’s hardly the chicest or daintiest thing. But it has a hugely appealing selling point: it can be charged manually by pulling on a retractable cord. (Ninety seconds of pulling will give the bank enough power to then charge a phone – via a USB cable – with energy for a 25-minute call.) That makes it an ideal emergency power source. Created by a British industrial-equipment company, it’s fitted with a built-in LED torch and there are optional attachments for things like Bluetooth speakers, a panic alarm and a GPS tracker, all of which are operated via a smartphone app. You don’t need bulging biceps to power it up; although it offers some resistance, the cord is tugged easily enough. It’s a pleasantly analogue travel companion. Unibank power bank, from £89.95, unibanktm.com

Like many folks living in fire-ravaged California, Anson Liang is no stranger to power cuts. And with the latest release from his young emergency-power-supply company Generark, Liang is calling on the sun for help when everything goes black. This solar-powered back-up generator can keep a home and its myriad devices – from fridges to medical equipment to electric cars – running for a week in the event of an outage. Boasting a cluster of USB ports and AC outlets, and 1566-2060Wh of energy, the stainless-steel rig is frankly far too attractive for a generator, which is traditionally among the frumpiest and noisiest of machines. It takes three to four hours to charge via the sun’s rays (it is apparently 50 per cent more efficient at converting solar energy than traditional solar panels; alternatively it can be plugged into a wall or car outlet) and its energy will be stored for a year. At a relatively portable 20kg – complete with wheels – it could also become your guardian angel on a camping trip. Generark HomePower 2 Backup Battery Power Station, from $2,099 (US only), generark.com

Easy on the laundry basket

I’m going to go out on a limb and say our laundry baskets contain far too many items that don’t really merit washing. FreshUp promises to save these barely worn clothes from a premature spin in the washing machine. Charged via USB, it looks like a cordless, elongated computer mouse and you glide the contraption across the armpits of garments made of silk, cotton, polyester or wool (but not leather or fur). It releases charged plasma particles that dissolve odour molecules on the surface of the clothes and, while it does produce its own slightly artificial scent, it’s far preferable to BO and mostly fades. 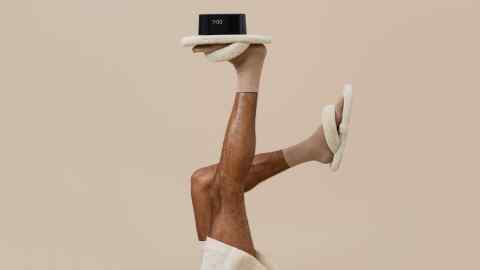 Akin to an ironing session, it takes a little over two minutes to treat a garment. And although it isn’t aimed at clothes that have been subjected to an intense gym class or are splashed with stains, this dinky device should still prove handy in reducing your water bills – and when travelling also. Bosch FreshUp, £250, bosch-home.co.uk

Get alerts on Gadgets when a new story is published