Housed in a 14th-century building on a cobbled street in Zürich’s old town, enSoie is one of those shops you think you have been so clever to find, but soon learn has a devoted following. It is a family-owned treasure trove that those in the know, know. Kirsten Dunst, Lady Gaga and Lena Dunham are just a few of the fans of its house-designed fashion, accessories and homewares. “It’s worth going to Zürich just to pay a visit,” says fellow boutique owner Alex Eagle.

The concept store began life in 1894 as a silk trader, and quickly became the go-to clothmaker for Dior, Balenciaga and Givenchy. But when the city’s fabric trade went into decline in the mid-20th century, it needed to reinvent itself. “My grandfather bought this company back in the mid-1970s, when it was struggling,” says creative director and CEO Anna Meier, who today runs the shop with her sisters Eleonore and Sophie. Their mother, Monique, and father Dieter, the frontman of electronic music group Yello, then stepped in and transformed it into a style institution.

Today, enSoie is beloved above all for its exuberant use of colour. Past the original parquet flooring and up the staircase to the first floor, customers will find racks of bright cashmere jumpers (from SFr380, about £330), sweeping Dupion silk circle skirts with deep side pockets in shocking pink, yellow-gold, deep coral and pistachio green (from about £690), and immaculately cut velvet trouser suits in shades of moss and dark berry. Anna has also collaborated with Harris Tweed to produce a capsule collection: boxy-cut jackets in orange tweed or their classic “Vichy” black-and-white check. “In Zürich, people tend to wear navy or black or grey,” says Anna. “Our shop is super-colourful. I think it brings joy!”

This enthusiastic application continues throughout the selection of canvas totes (from about £43), tablecloths and toiletry bags in a rainbow of prints, cake plates edged with their slogan “Love Rules Forever” (about £150) and even the chicest of handpainted dog bowls. “There is always a laid dining table that gets changed twice a week to best showcase our products,” notes Anna.

Playful designs extend to children’s clothes – sleeveless coral sweater vests, black and white Mary-Janes – and handmade toys such as Zwickel the Fox, who comes dressed in a soft blue velvet jacket (about £140). A rabbit, etched into the wall outside the store, has become part of the logo and features on everything from cushions to linen napkins. “My mother told me it was important that we speak to all generations,” says Anna. “We are so thrilled that we have customers of all ages – from a grandmother finding something for herself, her children and her new grandchild, to a 20-year-old who loves our tote bags and silk hand-embroidered bracelets. We really believe we have thought about everyone.” European chic, for all the family. 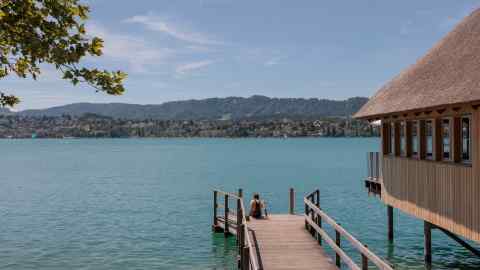