A surge in tourism has boosted the eurozone economy more than expected for the second quarter, benefiting Spain, Italy and France even as Germany failed to grow and analysts warned of a darkening outlook.

The region’s gross domestic product grew by 0.7 per cent in the second quarter as countries relaxed coronavirus restrictions — much stronger than the 0.1 per cent expansion forecast by economists.

But inflation hit a new high of 8.9 per cent in the year to July — up from 8.6 per cent in June — increasing the likelihood that interest rate rises, together with the war in Ukraine, could weigh down growth during the second half of the year.

Andrew Kenningham, economist at Capital Economics, said the eurozone’s second-quarter output would “be by far the best quarterly growth rate for a while”.

He added: “News that inflation was once again even higher than anticipated only underlines that the economy is heading for a very difficult period. We expect a recession to begin later this year.”

Partly because of the war in Ukraine, energy prices have increased by 40 per cent over the past 12 months, with food inflation up 10 per cent.

At 4 per cent, core inflation, which strips out energy, food and tobacco prices, is also double the European Central Bank’s target.

The bank raised interest rates for the first time in a decade last week and Friday’s inflation figures increase the likelihood of another 50 basis point increase in early September. Both the eurozone GDP and inflation figures were flash estimates by Eurostat, the European Commission’s statistics bureau.

Eurozone consumer confidence indicators are already at record lows, with more households saying that they will delay major purchases. Political turmoil in Italy, which will hold snap elections in September following Mario Draghi’s recent resignation as prime minister, has further worsened the outlook.

“The acceleration in growth is mainly due to reopening effects and masks underlying weakness due to high inflation and manufacturing problems,” said Bert Colijn, senior economist at Dutch bank ING.

In Germany, the eurozone’s economic powerhouse, GDP remained at the same level as in the first quarter.

Given German dependence on Russian energy, fears are mounting that reductions — or a complete shut-off — in gas flows through the Nord Stream 1 pipeline to the country could prompt a region-wide recession.

Gas prices soared earlier this week after Russia’s Gazprom said flows through Nord Stream 1 would slow to just 20 per cent of their normal level.

The higher cost of oil and gas imports resulted in a massive deterioration of Germany’s trade balance, which knocked back growth, said the federal statistics agency Destatis, adding that economic activity was buoyed by household and government spending.

Economists polled by Reuters had, on average, expected France’s quarter-on-quarter growth to nudge up just 0.2 per cent in the second quarter, after it contracted at the beginning of the year. Italian growth had been forecast to be 0.3 per cent, Spain’s 0.4 per cent and Germany’s 0.1 per cent.

Disrupted Times
Eurozone health check: growth is up but so is inflation 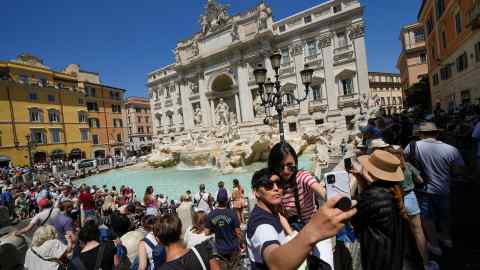 “We have all the foreigners back after two years,” said Marina Lalli, president of Italy’s National Federation of Travel and Tourism Industries. “We were worried that without Chinese and Russians, we could have problems, but we’re not experiencing what we were fearing.”

But she acknowledged inflationary pressures were damping domestic demand, as concerns grow about the rising cost of living: “Italians are afraid to spend money.”

In Spain, consumer price inflation accelerated to a 38-year high of 10.8 per cent.