Hannah Kuchler in Chicago and Sarah Neville in London

AstraZeneca has unveiled data suggesting that its push into early-stage treatments for cancer is yielding results, as the drugmaker seeks to lead a global race to increase survival rates.

Having initially fallen behind competitors in developing immunotherapy treatments for metastatic cancer, AstraZeneca has over recent years sought to carve out a niche in devising approaches effective at earlier stages of the disease.

In an interview at the American Society of Clinical Oncology meeting in Chicago, where the company released the results of a series of clinical trials, Pascal Soriot, chief executive, said the strategy is now paying off.

He said that new technologies designed to detect cancer earlier — such as liquid biopsy tests — would make a “huge difference”, potentially curing cancer or making it manageable as a chronic disease such as HIV.

Mr Soriot added many competitors were still focused on improving survival rates for stage four cancer — often considered a terminal diagnosis — rather than targeting earlier stages where the likelihood of survival is higher.

“If you’re diagnosed early, in stage one, two, then your survival rate is 80, 85 per cent,” he said. “So then you can lift that and potentially cure patients.”

Among AstraZeneca’s headline presentations at Asco was data showing that Imfinzi, an immuno-oncology medicine, was prolonging the lives of lung cancer patients whose disease had reached the third stage.

Astra said that Imfinzi was the only immunotherapy to demonstrate overall survival at three years in “unresectable” Stage III non-small cell lung cancer. The term refers to tumours that cannot be completely excised through surgery.

The study showed that 57 per cent of patients were still alive after three years, compared with 43.5 per cent taking a placebo. Both groups had already received chemotherapy. 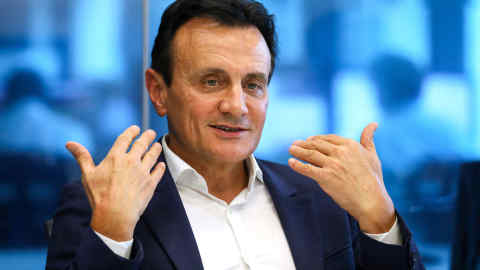 The company also announced the results of a study, carried out jointly with the US pharma giant Merck, on Lynparza, another drug in its cancer portfolio. The study holds promise for treating pancreatic cancer, one of the most intractable forms of the disease.

In 2017 Astra and Merck agreed to collaborate in developing and commercialising the medicine.

The trial tested Lynparza tablets as a “first-line” — or initial — maintenance treatment for metastatic pancreatic cancer patients with a particular genetic mutation, whose disease had not progressed following chemotherapy.

Results from the trial showed a “statistically significant and clinically meaningful improvement” in the time patients could live without their disease getting worse, compared with those on a placebo. This reduced the risk of the disease progressing or of death by 47 per cent.

The median time patients treated with Lynparza went without their disease worsening was 7.4 months compared with 3.8 months for those on a placebo. More than twice as many patients had seen no deterioration in their condition both one year and two years after starting to take the medicine.

José Baselga, who leads oncology R&D for Astra, said: “These unprecedented results raise new hope for patients that have seen little progress over a long period of time.”