Less than two hours away from president Donald Trump’s Mar-a-Lago resort in Palm Beach is the Homestead detention centre, a roundly criticised facility that has housed approximately 14,300 unaccompanied migrant children since March 2018. The centre is now dormant but its very existence has become a symbol of Trump’s “zero tolerance” immigration policy.

It is against this backdrop that art dealer Sarah Gavlak, who has galleries in Los Angeles and Palm Beach, is launching a residency programme in Palm Beach for immigrant artists. The project is being established in collaboration with the City of Asylum, a non-profit organisation based in Pittsburgh and founded in 2004 by Henry Reese and his wife Diane. City of Asylum provides sanctuary and a thriving community for exiled and persecuted writers, as well as providing assistance such as medical benefits and legal counsel.

For her artists’ residency, funds are largely being raised through Gavlak’s New Wave Art Wknd, an annual event that takes place in Palm Beach, timed to coincide with the weekend following the opening of Art Basel Miami Beach. It combines glitzy dinners at collectors’ homes, including those of Amy Phelan and Beth Rudin DeWoody, with weighty panel discussions — this year’s topic is “immigration and migration through a cultural lens”. As part of the New Wave Art Wknd, Henry Reese is speaking on a panel about displacement at the Norton Museum with chief curator Cheryl Brutvan on December 6. Sponsors include Phillips auction house and the Dominican fashion designer Oscar de la Renta.

Franklin Sirmans, director of the Pérez Art Museum Miami and member of the New Wave Art Wknd advisory committee, feels it is “the moment to talk about social agency in the arts, particularly around immigration and especially given our geographic position. With all the things happening down at Homestead, how could we not?”

The aim of the residency is to provide accommodation and workspace, as well as financial support and studio visits. Enticed by lower taxes, South Florida boasts some of the US’s wealthiest collectors. “I want artists to have a seat at that table,” Gavlak explains, “and to put a human face to the stories of people coming here to pursue their art, which might, in a small way, change hearts and minds about immigrants.”

Gavlak insists there is no pressure for artists to produce an exhibition or deliver a lecture. “I want to provide a place of respite, somewhere people don’t have to necessarily come and work,” she says. The dealer adds that she could potentially handle any sales through her gallery, but stresses that her cut would be reinvested in the programme.

The first artist to take up residence is Renzo Ortega, who fled his native Peru in June 2000 and became a naturalised US citizen in 2013. “The political situation was very bad under the dictatorship of [Alberto] Fujimori and I saw no future there,” Ortega says. He is due to spend a month in Palm Beach in June, although Gavlak envisages longer residencies in the future.

Ortega’s work focuses on the positive contributions immigrants make to societies, both culturally and economically. “Take reggae music, which has had an enormous impact on British culture,” he says. His approach is a counter, he believes, to the dominant narrative peddled by the US government and certain, rightwing factions of the media: “We often hear that immigrants are criminals and are taking our jobs; I want to show the other side of the coin.”

During his residency, Ortega says he plans to make “positive, colourful paintings because our history and our presence is not all about suffering”.

There has been plenty of lip service paid to diversity in the art world in recent years, but Gavlak has long championed women and artists of colour in her Palm Beach and Los Angeles galleries. “When I opened in Florida in 2005, I had a prominent male collector tell me that if I wanted to be successful or make money, I’d have to show more men,” she recalls. “I was like, wow, how about you get behind what I’m doing?”

I want to to put a human face to the stories of people coming here to pursue their art, and change hearts and minds about immigrants

Piercing the art world bubble is a priority for those involved in Gavlak’s project. The reality of Palm Beach, which is 95 per cent white, is that the gap between rich and poor is far more pronounced than in most places in the US. “You feel it very acutely in Southern Florida,” Sirmans notes. “And you not only feel it in terms of the haves and have nots, but also in terms of access. When we talk about immigration, the levels of access are absolutely not equitable.”

While Palm Beach is home to more than 30 billionaires, and Rod Stewart and Iris Apfel own properties alongside Trump, few, if any, artists live there. Could this be about to change?

Gavlak hopes so. West Palm Beach, which is hipper and more down-to-earth than its lavish neighbour, is developing rapidly. The Norton Museum of Art reopened there earlier this year after a $100m expansion, upgrading the county’s art credentials. “There’s a really lovely quality of life in West Palm and, as we know, artists are being squeezed out of other cities like New York that have become very expensive,” Gavlak says. “So why not have artists moving there to live and work?”

The lasting impact for all involved in an artist residency such as Gavlak’s cannot be underestimated, Reese explains. “Ultimately the most interesting aspect of the programme is that you start out thinking you’re protecting and making a home for someone else, and then you realise that person is just as importantly helping you make a home in your community and strengthening your values,” he says.

“There’s a reciprocity that you don’t understand until you experience it.”

Follow @FTLifeArts on Twitter to find out about our latest stories first. Listen and subscribe to Culture Call, a transatlantic conversation from the FT, at ft.com/culture-call or on Apple Podcasts 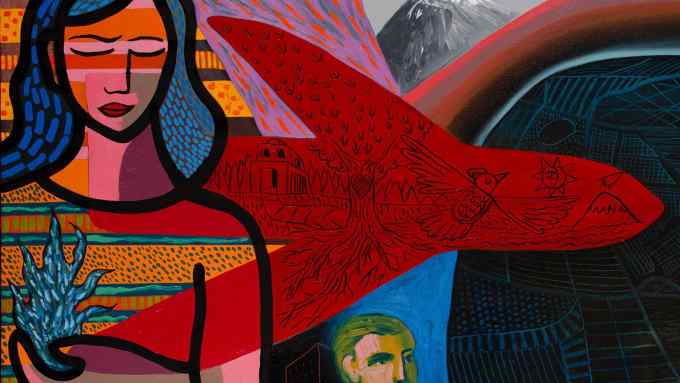 As Art Basel Miami Beach opens its doors, we look at the fairs, people and trends shaping the art market in the Americas