In the 57th minute of a match that took place last November, striker Kike Garcia passed the ball into an empty net. The goal sealed SD Eibar’s first victory over Real Madrid in the team’s 79-year history.

Eibar, by contrast, is one of the smallest clubs in La Liga, playing in only its fifth season in Spain’s top division. The team represents a small town of just 27,000 inhabitants in the Basque country. That number would not fill even half of Real’s Bernabéu stadium.

Eibar had revenues of just €58.7m in 2016-17. But that equated to a three-year compound annual growth rate of 44.1 per cent — which was enough to join the FT 1000 list of Europe’s fastest growing companies for a second year in a row.

Its rise has been down to a mixture of luck and judicious financial planning. “We have operated like a small town company, like a family,” says Jon Ander Ulazia, Eibar’s chief executive, who calls this conservative approach part of a “culture of our grandmas”. 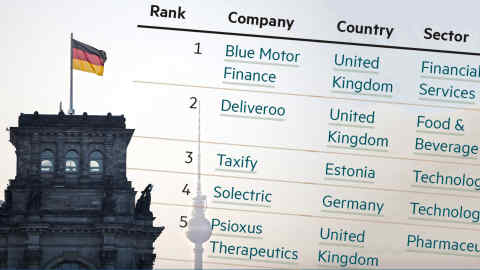 “For a lot of years in Spain, small clubs have been spending a lot of money and they have great debts that have made them unsustainable,” he says. “We have been in a good situation, we have no debt, due to our culture. This has allowed us to be more competitive behind the great clubs.”

Six years ago, Eibar was playing in Spanish football’s third tier. Unexpectedly, it won back-to-back promotions. The march up the divisions led to La Liga, but there was a catch. Due to laws designed to strengthen clubs to ensure they had enough capital to operate, Eibar was told to raise €1.7m to ensure promotion.

The club launched a scheme allowing supporters to buy voting shares in return for small sums. The plan received support of senior football figures such as Xabi Alonso, the former Real Madrid midfielder who once played briefly for Eibar.

Reports from the time suggest that 10,000 people from 50 countries bought in. That allowed Eibar to raise the required figure, while also putting the club in the ownership of its fans.

We have to be a different club that again aspires to play in La Liga, instead of trying not to be relegated

Up against wealthier rivals in the top division, the club struggled and finished in 18th place during the 2014-15 season — a position that should have seen them relegated. But rival Elche was demoted from La Liga instead as punishment for financial mismanagement, leading to Eibar retaining its place in the league.

“I always found that poetic in a way, as Eibar has always been labelled as one of the best-run clubs,” says Euan McTear, author of the 2015 book Eibar the Brave: The Extraordinary Rise of La Liga’s Smallest Team.

“They got that reprieve because Elche was very poorly run. That’s the luck they’ve had along the way.”

Before this, clubs would negotiate TV contracts individually, which benefited big teams like Real Madrid and Barcelona.

“What it meant is that they are guaranteed a relatively high amount of revenues,” says Tim Bridge, a director at Deloitte’s sports business group. “It is a testament to the whole centralisation model that a club like Eibar can now succeed.”

Still, Eibar has stayed in La Liga without spending beyond its means. It generated pre-tax profits of €14m in 2016-17. The team relies on promoting young players and scouting footballers acquired cheaply before they move on to other clubs that can offer higher salaries. For example, defender Florian Lejeune joined the English Premier League’s Newcastle United for £9m in June 2017, a season after Eibar acquired him for £1.35m, according to data from Transfermarkt, a football statistics site.

Eibar’s executives accept a club of its size could be relegated from La Liga in the future. Instead of big spending on players to avoid this fate, it is using about €40m from its recent windfall to improve and expand its stadium, and build new training and academy facilities. These are intended to strengthen Eibar over the long term.

“What we have done with these investments is transform our club,” says Mr Ander Ulazia. “We have to become a strong club. We have to be a different club that again aspires to play in La Liga, instead of trying not to be relegated again to the third tier.”