As Covid-19 spread across Venezuela last year, politicians opposed to Nicolás Maduro’s authoritarian government wanted to help health workers who were battling the pandemic in dire conditions, often without protective equipment or disinfectant.

There was little they could do. Maduro had tightened his grip on the country’s purse strings; tough US sanctions had exacerbated an already dreadful economic crisis; and neither the government nor the browbeaten opposition could spare any cash for doctors and nurses.

But the president’s opponents had one potential weapon: access to Venezuelan state funds frozen in US bank accounts.

Ever since Venezuelan congressman Juan Guaidó launched his audacious attempt to unseat Maduro in 2019, the US government has recognised him as the legitimate president of Venezuela. Washington argues, therefore, that Venezuelan state money seized by US authorities belongs to Guaidó’s administration — not Maduro’s de facto government. 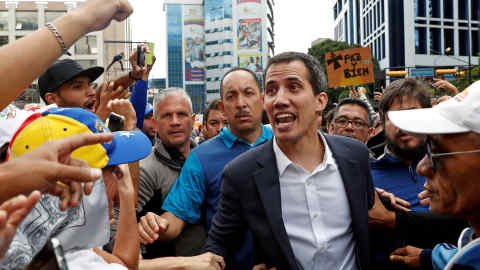 Guaidó’s people figured that, if they could persuade the US Treasury to release the money, they could pay health workers a bonus. They asked US law firm Sullivan & Cromwell to help.

Sullivan & Cromwell’s first job was to convince the Treasury’s Office of Foreign Assets Control (Ofac) to release the funds. “It was very, very important to Ofac and the US government that the money was really going to the intended recipients,” Galvis says.

The next hurdle was to find a way to send the money to Venezuela securely, without it being intercepted by the Maduro regime or the many creditors suing for compensation for broken promises and assets expropriated during the past 22 years of revolutionary socialist rule.

That meant sending money through the Venezuelan banking system was not an option. So Sullivan & Cromwell joined forces with tech businesses, including digital currency company Circle, to funnel the money to Venezuela via other means.

“We were able to put in place an aid disbursement pipeline that leveraged the power of USDC — dollar-backed, open, internet-based digital currency payments — to bypass the controls imposed by Maduro over the domestic financial system,” Circle says on its website.

The money was deposited in digital wallets created by online payment platform Airtm. Doctors and nurses had to register on the Airtm website to receive payment.

This caused some problems. Guaidó’s team says the Maduro regime blocked Airtm, forcing recipients to use VPNs (virtual private networks) to access payments. Canadian VPN company TunnelBear provided free access to its services for a while, arguing that “healthcare workers deserve the benefits of an open and uncensored internet”.

Once the recipients had the money in their digital wallets, they could spend it online, transfer it to local bank accounts in the Venezuelan currency, bolívars, or send it to other Airtm users.

In all, Guaidó’s team says the scheme channelled $18m to more than 60,000 doctors and nurses. The payments were set up as $300 per person in three monthly instalments of $100. In a country where the official minimum wage is less than $3 a month, it was appreciated at a time when healthcare workers, including doctors and nurses, had to survive on little.

Did the system work? Generally, yes, says Mauro Zambrano, a union representative for Venezuelan health workers. “There were some problems, and some workers only received two of their three payments, but a lot of people got the money and it made a difference,” he says.

There were some problems . . . but a lot of people got the money and it made a difference

Guaidó, Ofac and Sullivan & Cromwell might regard the money transfers as a noble enterprise but, to Maduro, they were theft. From his point of view, the US had stolen Venezuelan state funds and handed them to a puppet administration led by the unelected Guaidó, which in turn disbursed them to selected health workers without proper oversight.

For Galvis, though, the legal case is watertight. He says his firm’s client “was a government recognised by the US, operating in compliance with US law, which is pretty clear on this”. Once the US secretary of state “has designated ‘X’ as the recognised government of a country, that is binding on all arms of the US government”, he adds.

Galvis explains the essence of what Sullivan & Cromwell was trying to achieve: “We had to come up with a system that complied with US sanctions rules and could lawfully get money into the electronic wallet of a nurse sitting in Caracas so she could go to the supermarket and buy milk.”