Korea’s rise to the status of a cultural superpower, influencing creative industries globally, is being celebrated in an exhibition called Hallyu! The Korean Wave at the Victoria and Albert Museum in London, running until June 25 2023.

But Hallyu — a Chinese term referring to the soaring popularity of South Korean pop culture across the world — is increasingly shaping the business of luxury houses, too.

Several high-jewellery launches in June this year happened with the blessing of a K-pop singer as guardian angel. Jisoo was the guest of Cartier’s Beautés du Monde gala in Madrid; Lisa was with Bulgari in Paris; while Rosé, a Tiffany ambassador, made an appearance at the grand opening of its exhibition, Vision & Virtuosity, held at the Saatchi Gallery in London.

These three performers, together with Jennie, one of Chanel’s global ambassadors, sing and dance in the K-pop band Blackpink. And, through their brightly coloured and rhythmically choreographed video clips, conceived as mini-movies, they hold sway over millions of young fans across China, Asia and beyond.

Think of the Spice Girls — then add the power of more than a quarter of a billion followers on social media. Associating with these K-pop stars is a way for the jewellers to be culturally relevant, reach a new younger audience, and boost sales in an uncertain macroeconomic environment.

“With the success of K-pop and K-drama, Korean talent has been able to have a strong cultural presence and influence globally,” says Alexandre Arnault, executive vice-president for product and communications at Tiffany, of its choice of Rosé as a brand ambassador.

But, in business, culture must sing in sync with commerce. In June, Bain published a luxury report that identified Korea as the new Japan, with a market totalling about €15bn — or 5.2 per cent of the global €288bn luxury market. That suggests it has grown from being 50 per cent of the size of Japan’s market (2016) to 75 per cent (2021). Nestled between China and Japan, not only is Korea a vibrant tourist shopping destination, it has also steadily developed a strong base of local consumers who have pushed jewellers to spruce up their retail presence.

Cartier, which already counts 19 points of sale in the country, is opening a new flagship store this month. Last month, Chaumet added a fourth store in Seoul. “It is important to the Maison to engage with local audiences,” says chief executive Jean-Marc Mansvelt.

Instead of costly ambassador contracts, often in the seven-figure region, the 242-year-old brand has built “friendships” for tactical activities with K-pop singers Nayeon, Krystal Jung and Cha Eun-Woo and actress Song Hye-Kyo. The try-on-tiara filter Chaumet launched with Nayeon last Christmas “has been downloaded by many followers, old and new ones, who have all played with it and generated stories and posts”, says Mansvelt.

Bulgari chief executive Jean-Christophe Babin reports a similar K-pop effect — and increased sales of entry-price pieces at about €3,000. “Since we began working with Lisa, there has been an increased buzz online, especially on Twitter, all across Asia and beyond,” he says.

According to Équité research, 15 to 20 per cent of luxury purchases worldwide are already made by the Gen Z demographic — under 25 years of age now — an estimate that reaches 30 per cent of consumers in China. “Being associated with a vibrant, young pop culture helps legacy brands to transition into the Gen-Z preference cluster,” says Daniel Langer, the firm’s chief executive and professor of luxury strategy at Pepperdine University in Malibu, California.

Babin agrees. “The Asian market differs slightly from those elsewhere as the luxury industry there tends to lean more to a younger crowd. So, it is essential for Bulgari to be inspirational and make them fall in love with the brand through storytelling, which is in line with their values.” 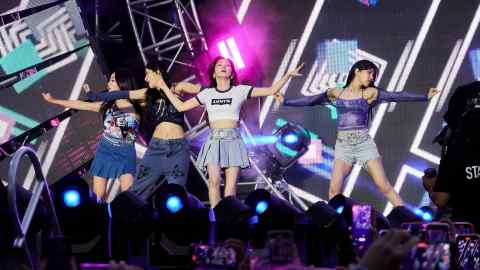 He also stresses Asian women’s influencing power in every field. “Asia is undoubtedly the engine of global growth. Cities such as Seoul, Tokyo or Shanghai are today as influential as traditional fashion and luxury capitals such as Milan, Paris or New York.”

However, more than popularity and youth, Arnaud Carrez, senior vice-president and chief marketing officer at Cartier, is concerned with the long-term relevance of the brand. “For sure, we have noticed an uptick in searches for certain products and more engagement on social media since signing Jisoo, but we are not obsessed with ambassadors, or ambassadors with very high reach — we want to engage with talent,” he says. “Jisoo has worked extremely hard to reach her position, and she complements the other people we partner with.”

Carrez adds that Cartier’s ambassadors come from varied professional paths, such as boxer and author Ramla Ali and actor Paul Mescal, who does not have a social media presence. “We do not have a communications strategy to attract a young audience, as we do not create products with a young audience in mind,” he says, pointing to products such as the Santos watch, created more than a century ago, which is still popular among young consumers.

Indeed, with LVMH’s and Richemont’s half-year results showing a healthy 22 per cent and 49 per cent growth in sales of watches and jewellery, respectively, their over-100-year-old brands look poised to stay “Forever Young” — in the words of the Blackpink song.