Designs for living – Alek Wek takes fashion to the max

The Sudan-born supermodel talks about her 25-year career, confidence and a new collaboration that has stretched her creative output in new ways

Alek Wek is spinning around the courtyard of a hotel in Brooklyn, her printed dress blurring into abstraction, with a smile as wide as her ears. At 44, the supermodel still holds the same magnetic energy, optimism and impossibly lithe frame that saw her catapult onto the global stage some 25 years ago. “Now, in my 40s, I feel so beautiful as a woman,” says Wek, her accent a smooth culmination of the different countries that she’s lived in. “I would tell any young girl, ‘Don’t be afraid of how you feel. The world will try and mould you into something else but you have to be who you are.’”

Wek was born in Wau, a city in what is now known as South Sudan, in 1977. During the country’s civil war, she escaped to London as a refugee aged 14, and spent her teenage years in Hackney with her mother and sisters. For the past two decades she’s been based in New York, a place she always felt she belonged; a brownstone in Fort Greene is home. “In London, I love that you’re never very far from a park, and that’s the same in Fort Greene,” Wek says. “I like to wake up early, if I haven’t worked late the night before, and go for a stroll or visit the farmers’ market.”

When she’s not on the runway or shooting fashion campaigns, Wek likes to paint – a hobby she picked up early on in her career. “I’ve always really enjoyed my art, and I’ve always wanted to have a platform where I can share that because it’s personal,” says Wek of the travels, colours and scenery that fire her imagination. “It’s my journey, and it’s part of who I am.”

Now a platform has arisen through a new collaboration with the Italian brand Weekend Max Mara, for which she has co-designed a capsule collection with the in-house team. One of her artworks – a colourful mass of brush-strokes that mimic the curve of her lifeline – is printed on a ruffled knee-length dress; graphics from another black-and-white painting are transposed onto a tassel blouse.

I would tell any young girl, ‘The world will try and mould you into something else but you have to be who you are’”

Despite once having created a line of handbags (called Wek 1933, now discontinued), Wek hasn’t designed clothes before. She had started a diploma at the London College of Fashion before she was scouted, aged 18, at an outdoor market in Crystal Palace, but her runaway success meant she was unable to complete the course. Her early career saw her starring in the music video for Tina Turner’s “GoldenEye”, in which she lounges on a chair in a leopard-print bikini and knee-high boots, as well as starring in Janet Jackson’s music video for “Got ’Til It’s Gone”. Standing at 5ft 11in, she was quickly ushered into fashion modelling, shooting editorials with Steven Meisel for Vogue Italia and Arthur Elgort for American Vogue. During her first runway season, in 1996, she walked for Ralph Lauren and Donna Karan.

In the ’90s, the fashion industry was almost exclusively white – which made Wek a trailblazer. She was the first African model to star on the cover of US Elle, in November 1997, at a time when the industry was arguing that black models didn’t sell magazines. The move garnered significant attention and landed Wek an interview on Oprah. As the talk-show host noted: “When I was growing up, if you had been on the cover, I would have had a whole different concept of who I was.” In 2004, Wek became the first black model to play the prestigious role of Chanel bride (the closing look of the maison’s couture shows). It wasn’t until 2018 that South Sudanese-Australian model Adut Akech became the second.

Despite her early success in the industry, Wek is vocal about how she has been pigeonholed and exoticised (she recalls jobs in which she was asked to pose with animal skins or a spear). In 1998, while walking the runway for Betsey Johnson, she pulled off the blonde wig she had been styled in and threw it into the audience: a protest at being made to cover up her hair. She still wears it naturally and in a close crop, a gesture of defiance that has taken on more resonance today. “Alek Wek has transformed fashion and womanhood eternally through the perception of her beauty,” says Bibi Abdulkadir, who has always admired her fellow model. “She has schooled the world on the ultimate power that lies in simply being yourself.”

Art of Fashion
Stella McCartney: ‘I just want to save the planet’ 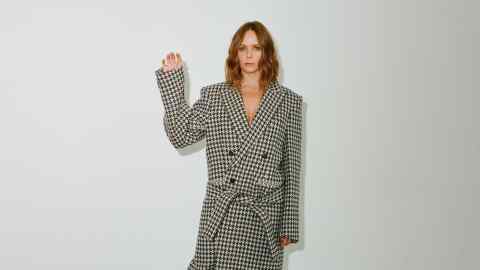 Wek was insistent that the Weekend Max Mara collection would reflect her whole, multifaceted identity. “She wanted the designs to be inspired by her life and her lifestyle – things she would actually wear,” says Giorgio Guidotti, Max Mara’s global president of PR and communications. The collection reads as an autobiography in clothing: a hooded jacket, inspired by one she wore as a teenager, nods to her time in the UK, as does a beige trench coat. A pair of boots, meanwhile – a kind of motorcycle-hybrid – is in the same style that she wears to walk around Brooklyn. The landscape of Morocco, where she filmed The Four Feathers alongside Heath Ledger in 2002, inspired the colours used in a silk scarf.

Most striking, though, is the striped knitwear, which features a zip-up top and pleated skirt. The colours match those of the South Sudanese flag and carry specific symbolism: black represents the people, green is for agriculture, blue for the Nile, yellow for unity and hope, red for the bloodshed during the civil war, and white for the peace attained after years of struggle. “The colours mean a lot to me because I never foresaw that South Sudan was going to be independent while I was still alive,” says Wek. “I thought I would never see that, because it’s been a very long civil war, and it has displaced people. But we always had hope. And, for me, that’s what those colours are.”

More than just reflecting Wek’s own life, the Weekend Max Mara collaboration is part of a growing, broader acknowledgement and celebration of African creatives and aesthetics within the global fashion industry. “Designers of African heritage have been impacting global fashions for decades, for example Chris Seydou in the mid-20th century and Virgil Abloh today,” says Dr Christine Checinska, curator of African and African Diaspora Fashion at the V&A. “What we are witnessing now is a galvanisation of creativity and an increasing focus on their representation in the media.”

“Photographing Alek in Brooklyn was a joyful and powerful experience,” says the documentary-style photographer Andre D Wagner, who shot this cover story. “She showed up on set with her personal paintings and scarves from Africa and her various travels. She has so much energy – she brings the clothes alive.”

Indeed, Wek’s turn as fashion designer shows how the model is still helping to shape and redefine the industry, both in front of the camera and behind the scenes. “I’ve always wanted to show my heritage, and this was such a beautiful way to do it,” adds Wek. “I’m really happy that I can translate that through fashion. Even though these aren’t prints from Africa, I am African, and that’s in my heart. It’s amazing how art and fashion can really speak in that way.”

Get alerts on Fashion when a new story is published