Gabriel Benador recalls being the only bidder when he bought his first A Lange & Söhne watch in 2017. He views the pink gold Pour Le Mérite Tourbillon, from 1994, as “the most special piece that Lange has ever made”. It marked the first time a fusée-and-chain mechanism — a complication that improves accuracy — was used in a wristwatch. “I just threw up my hand and I got it,” he says.

Benador, who runs a family office from Geneva and New York, will face stiffer competition in future as auction houses report a growing market for the German timepieces.

The history of Saxony-based A Lange & Söhne is split into two chapters.

Ferdinand Adolph Lange started a watch business in Glasshütte in 1845 but the company was expropriated during the Soviet occupation after the second world war. Following the fall of the Berlin Wall, his great-grandson, Walter, relaunched the brand in 1990 and, with the help of the watch manager Günter Blümlein, released its first collection in 1994.

Today, the company — owned by Swiss luxury group Richemont — produces only 5,500 mechanical watches a year, and is known for its innovation and complications.

How To Spend It
The ‘ultimate chronograph’ strikes again 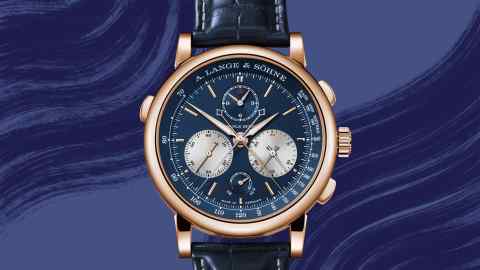 Interest at auction has grown over the past three years. The 10 most expensive A Lange & Söhne wristwatches sold at Sotheby’s in the first nine months of this year went for a combined total of $1.2m and attracted bids from 83 different bidders. This is a marked rise on the 52 bidders who competed for the top 10 lots, which sold for an aggregate total of $835,000, throughout the whole of last year, and the 61 bidders who competed in 2019.

Sam Hines, global head of watches at Sotheby’s, says the increase has been driven by more collectors in Asia focusing on the brand. Nine of the top 10 wristwatches sold to the end of September went to buyers in Hong Kong.

However, he says “those numbers can skew favourably to Hong Kong when really the buyers are in other places in Asia” because they have homes in Hong Kong. “The mainland Chinese collectors today really look for quality and rarity, and Lange really does fit that criteria,” he says.

This popularity — a result of increased awareness fuelled by the internet and social media — has affected supply, as current owners wait to see if prices will climb further. By the end of September, Sotheby’s had sold 17 A Lange & Söhne wristwatches this year, compared with 34 during the whole of 2020, and 53 in 2019.

“They really don’t come up very often, mostly because the people who have them like them and keep them,” says Jonathan Darracott, global head of watches at Bonhams. This “scarcity . . . means that when they do come up for sale, people who want one will fight for it”.

He says “everyone was all over” a rose gold model Bonhams sold for £16,500, double the low estimate, in September. “It was a straightforward piece, but they’ve caught the imagination.”

Distinctive features of the brand’s watches include the signature outsize date and hand-engraved balance cocks. “The engraving is a little bit like handwriting,” says Wilhelm Schmid, chief executive of A Lange & Söhne, which has hundreds of buyers on its waiting list. “So, in that way, every watch is a little unique because [it’s] freehand engraving and no two are the same, even it’s done by the same engraver.”

He believes the “very nice acceleration of our resale value at auction” in the last three years is a result of a combination of factors, including a change in how the company allocates new watches. Starting with the Datograph Up/Down Lumen in 2018, it allows only existing clients to buy certain models, such as the recently-launched Zeitwerk Honeygold Lumen. 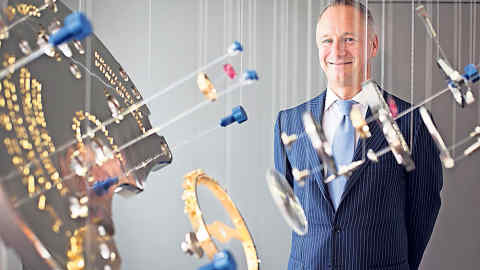 This system was used for the stainless steel Odysseus launched in 2019, which Schmid says was developed to please existing customers. “We have a key interest in understanding who is the customer of that watch to ensure that we don’t give it to somebody who is just giving it to the grey market and makes a quick profit,” he says.

He is not against the profit but, with demand outstripping supply, says a watch will “find its way at a massively increased price to somebody that for sure has applied for it in the first place” — and that customer will say the brand allocated it to the wrong person. For this, Schmid is both apologetic and sympathetic.

Meanwhile, the business is growing — between 12 and 18 watchmakers will come through its training in each of the next three years — but that might not increase output. “We may even produce less watches because [we] produce more complicated watches,” says Schmid.