Where to get the best interval drinks

Fed up with being served warm white wine? These bars are worth an ovation

Before I became a journalist I worked in the theatre. It was a life rich in brain food but extremely short on sustenance – back then there were precious few places to eat or drink on the South Bank. One director I worked with maintained that going to the theatre should be like going to church: all uncomfy seats, troubling introspection and definitely no interval G&Ts. I abandoned the arts for a career that offered nicer wine. But there are a growing number of theatres where you can get a decent drink these days.

Much credit must go to immersive theatre companies such as Punchdrunk, which were the first to spot the creative (and commercial) potential for making the bar part of the storytelling. Visitors roaming Punchdrunk’s new show The Burnt City – a retelling of the fall of Troy – can visit a Dewar’s whisky bar serving “Kykeon” cocktails inspired by a Greek drink mentioned in Homeric texts.

Rebecca Frecknall’s Cabaret in the West End is awash with decadent Jazz Age drinks: curvaceous coupes of Moët champagne, schnapps shots and petal-topped gin sours, served from a trio of bars inspired by ’30s Berlin. Meanwhile, the immersive Alice’s Adventures Underground comes to the Labyrinth in Waterloo this winter with a new bar, Underland, serving whimsical cocktails straight out of the Mad Hatter’s tea party: a jade-green cocktail wreathed in dry ice; a Negroni poured from a tea pot.

For the premiere of Little Women, Opera Holland Park offered a quartet of wines inspired by the March sisters

Good drinks don’t just add to the spectacle, of course – they also increase the dwell-time in the venue (to get the full Cabaret experience you are urged to arrive more than an hour before curtain-up). For a cash-strapped theatre company they can represent a vital revenue stream. “We’re seeing a lot more new-build venues making more space for food and beverages,” says Robbie Bargh, founder of hospitality concept agency Gorgeous Group, which has consulted for venues including the Royal Opera House and Theatre Royal Drury Lane. “It’s about maximising the financial potential of a venue but also its emotional potential.”

Gorgeous Group has worked on Sadler’s Wells East, which is set to open in Stratford, east London, in 2023. “It will have performance spaces and rehearsal rooms; it’s next to Westfield Stratford and the V&A East – it’s going to be a cultural quarter almost,” says Bargh. “So it was important that the café and the restaurant were open to everyone.” The idea is that the drinks list, still tbc, is will reflect that ethos, with spirits and beers from local producers and a selection of English wines.

The Royal Opera House hired Ciaran Hogg, a former general manager at Soho House, to bring a new audience into its restaurants and bars. “We have amazing spaces; we want people to explore them,” says Hogg, who has organised everything from VIP dinners in the Royal Box to activities, family-friendly events and gin tastings. Champagne remains the bestseller – the bar gets through 100 bottles a day – but cocktails are much improved. And they’ll be making more use of the sun- and plant-filled Piazza Terrace – a bar with views of Covent Garden on one side and the costume department on the other, which I have long thought was criminally overlooked (and which is open to all regardless of whether you have a ticket to see a show).

In New York, the Lincoln Centre’s David Geffen Hall will reopen next month after a multimillion-dollar refurb, with several new food and drink outlets. Chief among these will be an Afro-Caribbean restaurant by star chef Kwame Onwuachi. “It is about our commitment to New York and widening our welcome to the entire city,” says president and CEO Henry Timms.

Andrew Lloyd Webber’s group LW Theatres, which owns six West End theatres including the Palladium and the Theatre Royal Drury Lane, recently embarked on an overhaul of its wine list in partnership with supplier Hallgarten & Novum. “Historically, theatres would focus more of their operation on the production itself,” says Hallgarten national account manager Howard Corrigan. “But there has been an increase in competition for the leisure pound, which has driven theatres to focus on the entire customer journey.” A focus on more upmarket and organic wines combined with smaller serves has helped boost per-head wine spending at LW Theatres since 2019 by more than 11 per cent.

Some arts venues have created drinks lists even more bespoke. The Sydney Opera House commissioned craft distillery Archie Rose to create two gins inspired by the House. Back in London, Opera Holland Park tailors its drinks list to a production – for the premiere of Little Women earlier this year, it offered a quartet of US wines inspired by the March sisters with free tastings before the show. “I find it frustrating that the imagination and attention to detail that is put into the work on stage is too rarely matched with the creativity of approach to the theatre bars,” says chief executive and director of opera James Clutton, “so that is what I try to do at Opera Holland Park.”

HTSI
Why English wine is more beauty than beast 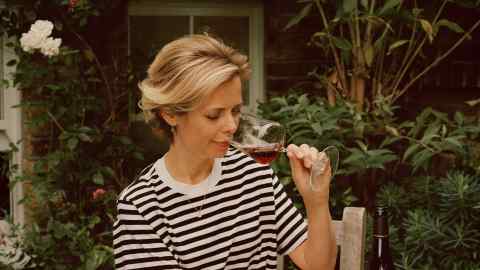 At the Bridge Theatre in Tower Bridge the half-time wines are supplied by St John Restaurant. “The most important thing when visiting a theatre is the bon accueil from everyone in the building,” says St John co-founder Trevor Gulliver. “This comes down to the quality of the drink and food.” The only question is, with drinks this good, will you return for the second half?