The Miami-based painter fills his artworks with curiosities. As he opens a new exhibition, we take a look in his cabinets

Miami-based painter Hernan Bas’s vitrine-lined library in his Little Havana studio space is overflowing with curiosities and bibelots. But lately, the obsessive collector has slowed down. A bit. “I ran out of space,” says the 44-year-old, ruefully. “Plus my boyfriend, Peter, was sort of done with my maximalist approach to life.”

Across the top of the cabinets marches a menagerie of taxidermy birds and a pig-like javelina. Encased inside are various found photographs, a vintage fighter-pilot mask from the 1930s, a ceramic Loch Ness monster and a shelf of German papier-mâché Halloween pumpkins from the 1800s. “I think I had 19 of them, but then my brother got me one for Christmas last year and it didn’t fit in the cabinet. You reach a limit. Like, how many ghost photos do you need? I have eight, that’s enough.” These collections of “oddities” and “weird trinkets” are all tied into Bas’s idiosyncratic artistic universe. The pumpkins feature in one of Bas’s paintings from 2014, alongside ghosts made from bed sheets.

For the past 20 years, Bas has created intricate and intriguing paintings of winsome young men, usually in fantastical or surreal settings. They have varied from vibrantly lush, bird-strewn Florida landscapes (Tropical Depression, 2015) to rooms of Memphis Milano design furniture (Memphis Living, 2014). Each features a lexicon of curious motifs: flamingoes and snakes and spooky houses; a shark or a giant clam shell.

“If I need a vase for the background, I’ll literally go to 1stdibs and find one,” says Bas. Other times, his research takes him elsewhere. “A couple of years ago, I was making a painting that involved a guy holding a hammerhead shark, which led me to all these weird Pinterest pages called Hot Guys Holding Fish… completely clothed hot guys. Holding fish.”

Bas’s new exhibition has just opened at Victoria Miro. The artist first showed with the London gallery in 2004 – the same year he was included in the prestigious Whitney Biennial in New York, then the youngest artist in its history. Today his work is in museum collections across the US and he’s represented by several heavyweight galleries, including Perrotin and Lehmann Maupin. “He’s just got better and better as a painter,” says Glenn Scott Wright, a director at Victoria Miro. “When we were talking about this new show, Hernan said, ‘I want to do a series of large, museum-quality paintings’ – and that’s what he’s done.”

The new exhibition works are both a continuation of his practice and a departure. The male figures remain on the cusp of manhood, but there’s less angst, less languor. His imagined characters are cast as artists in a series titled The Conceptualists. Gently teasing about the characters’ high-minded artistic pursuits (such as only painting with water from Niagara Falls), the works are amusing but not mocking, arch but tender.

Each character in The Conceptualists has a history. When Bas talks about them, it’s as if they are people he knows. “He’s really into Egyptology,” he says of Conceptual Artist #5, who spends his time gilding his dying houseplants. “I literally have dreams about these characters and what they would do – and I realised that they had been getting more and more involved in eccentric activities. It dawned on me that if you just called them artists, they’d get a free pass to be as eccentric as they please.”

In an accompanying limited-edition book, artist and writer Linda Yablonsky has created further backstories. “I basically gave her carte blanche,” says Bas of the texts that imagine names, histories and habits for the figures. “Sometimes I just gave her the title of the painting and she ran with it. In a way, the book becomes a conceptual project in and of itself.” A key inspiration for the new work was the 2019 mock-documentary Waiting for the Artist. “It’s Cate Blanchett as Marina Abramović, and it is one of the funniest things I’ve ever seen in my entire life,” says Bas. In his own gentle dig at performance art, Conceptual Artist #9 creates a car-park stage set of homemade spaceships, while #8 has a land-based practice of marbling countryside puddles with food colouring.

You reach a limit. Like, how many ghost photos do you need?

Bas’s own artistic journey began in upstate Florida. Both his mother and his musician father emigrated from Cuba to the US. One of six siblings, he spent his first six years living in a place he refers to as “a bizarre, backwards world of middle-of-nowhere woods that informed a lot of my weird interests in the paranormal. I dragged that with me in spirit to Miami.” At high school, he studied life drawing and painting, “but I became more of a photo geek”, he says. He went to art college in New York, but was asked to leave after a term for not turning up. “I think I’d had my fill,” he recalls, “and, being a little Holden Caulfield weirdo, I just wanted to do my own thing.” Back in Miami – “I was broke and had nowhere else to go” – and without access to a photography studio, he began to draw.

“At that time, he was incredibly shy,” remembers Scott Wright, who was introduced to Bas’s work in the late ’90s by major Miami collectors the Rubells. “Usually if I call an unknown, unsigned artist and say I’d like to come to their studio, they jump at it. But with Hernan, it took about two years to get hold of him, and then when he finally agreed to meet me, it was at a snooker bar in downtown Miami, at midnight. It was the weirdest studio visit. It was a whole process to get to know him and to look at the work.”

The star of this new exhibition, suggests Scott Wright, is the nearly 5m-wide diptych titled Conceptual Artist #7. “Compositionally, it’s an amazing painting,” he says of the cat-strewn interior scene that alludes to Andy Warhol’s 1950s artist book 25 Cats Name Sam and One Blue Pussy, and centres on a man dyeing one of the cats blue. “In my mind, this guy’s obsessed – as am I to some extent – with that book,” says Bas, whose additional Warhol references include a Brillo box and a red sofa – the type on which Warhol was often photographed at the Factory. The painting’s silver-leafed windows are a homage to the silver walls of the famous New York hangout.

Bas’s words in his artist’s statement could equally be said of himself: “My characters have entered into a phase of self-acceptance. Their unusual interests aren’t in the shadows any more, and they appear to be comfortable in their curious self-made worlds.” It’s a change that stems, he says, from the death of his mother in 2020. “I just had this moment of, like, consequences be damned. Risks are the name of the game. I think I can still push myself a lot more.”

Next up is a show at Lehmann Maupin in New York, which opens on 11 May. For the first time, Bas will continue this series in a new set of paintings. “I’ve been wanting to do this series for so long that I have a huge backlog of ideas,” says Bas, who is in his studio from around 11am to 7pm most days. He’s currently renovating his Miami home – a 1930s building on the edge of Little Havana – and recently finished renovating the Vancouver house he and his partner bought in March this year. 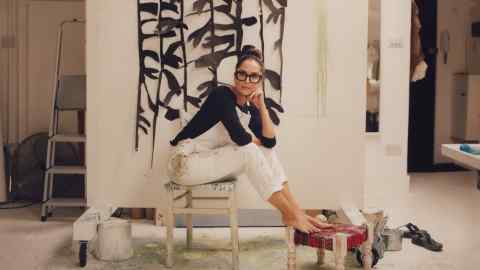 In terms of design, Bas says he’s leaning towards “a lot of Shaker furniture” at the moment. “And, like most art kids, I’m still a sucker for all that Memphis Milano ’80s stuff.” In his studio there’s a circular-shaped First chair by Memphis designer Michele De Lucchi, while on the wall there’s a Warhol silkscreen of Joseph Beuys. He also has a few individual prints from Warhol’s 25 Cats, while the book as a whole is on his collector’s wishlist. “Now, if I splurge on anything, it’s typically art,” says Bas. His latest purchase, from a “random auction house”, is a “weird crown by a self-taught artist called Eugene Von Bruenchenhein, who lived in a shack in Wisconsin and made little thrones out of chicken bones and stuff like that. It’s really strange.” It certainly feels like it has a place in the Hernan Bas universe. But strange, as we both agree, is definitely a good thing.