The bulbous beauty of bobbins

Spool furniture is cool again, with a modern, lively twist

The bulbous bobbin is back, bolder than ever. Its distinctive silhouette has been adding decorative flourishes to the legs of furniture for centuries, and a new wave of designers is reimagining its playful spirit.

The popularity of spool furniture taps into the craft revival. Natalie Tillison, a historian and the founder of design studio Folie Chambre, says its appeal is rooted in its long heritage and the traditional techniques used to make it, which date back to 17th-century northern Europe when wood was hand-cut and shaped on a lathe.

Each spool on the Sussex-based maker Alfred Newall’s sculptural, hand-turned tables, beds and, more recently, lamps and mirrors, exposes the wood grain​ through a range of vivid finishes. “I love the way bobbins provide a cross section through the timber that you don’t see with flat, straight sections of wood,” he says. “They have a very tactile appearance that is attractive to the eye and the touch.”

The biggest update is colour, and lots of it

When the lathe was mechanised in the 19th century, spindled furniture was mass-produced and became commonplace in American homes – it was often referred to as “Jenny Lind” in honour of the famous Swedish soprano who toured the US in the mid-1800s. Bunny Turner and Emma Pocock of London-based interior design studio Turner Pocock were still sourcing pieces from across the Atlantic up until a few years ago. Unable to find comparable designs locally, they teamed up with Chelsea Textiles, which recreates antique furniture and fabrics, to develop beds that “retain the integrity and design details of the originals”. The made-to-order collection also includes bedside tables, consoles and desks, handpainted in a choice of muted or brighter tones.

The current designs marry “traditional sensibilities with a more modern, clean-lined aesthetic’’, says Newall. Cabinetmaker David Ellis of Lascombe Hill was inspired by a Victorian occasional chair he bought some years ago, recreating its “shapely and timeless” design with 21st-century details. “Once the chair is painted and upholstered, it seems to become an art form of its own,” he says. “It’s totally at home with different styles and decor.” A similar observation is echoed by Tillison who finds that the bobbin creates a “pleasingly smooth and softening contrast to the more angular elements of minimalist interiors”.

The biggest update to spool furniture is colour, and lots of it​. ​Vibrant shades give a modern twist and bring even more character to the homespun pieces. “I love how adding a splash of colour can make the design so current,” says Becky Wilson, who worked as an interior designer for 15 years and now sells her own creations and vintage pieces via the Instagram shop Bohome Interiors. Wilson’s delicate, handmade bobbin frames are painted by hand in rich shades that pop against the antique lithographs and reprints of shells and seaweed they surround. 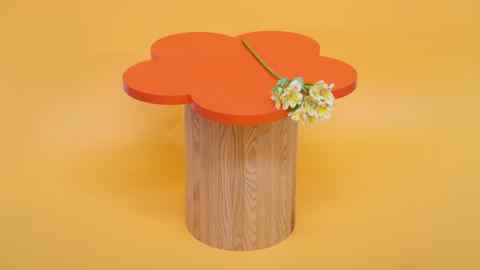