As donated drugs near expiry, time is running out to distribute them, just as the peak season for infection approaches

Fatma Kabole cried when she heard that the British government was scrapping support to tackle lymphatic filariasis — one of the world’s most pernicious diseases. The cuts, announced this spring, undermined her project in Zanzibar — and the expectations and goodwill she had spent months developing.

“It was so unethical,” she says. “I couldn’t believe they had first given us hope and then told us to send back the remaining funds. I kept thinking of the images of one young man who had come to thank us for our work.”

As a programme director in the island’s ministry of health, Kabole had started to see progress against lymphatic filariasis, a parasitic infection spread by mosquitoes. Also known as elephantiasis, it causes disability and deeply stigmatising disfigurements including swelling of the scrotum or legs in more than 36m people globally.

Kabole’s work involved reducing local prejudice and the shame felt by more than 3,500 affected by a severe form of the condition — encouraging them to make contact with a team of health and social workers for support; giving advice on hygiene and surgery; and expanding a programme to prevent further transmission.

The aid cuts were a heavy blow and exacerbated existing disruption to similar programmes caused by coronavirus infections and the reallocation of health staff and volunteers to tackle the pandemic.

At the core of efforts to tackle these NTDs are “mass drug administration”, or MDA, programmes, whereby local community health workers and volunteers distribute cheap or donated medicines given in low doses to large numbers of at-risk people. This acts almost like a vaccine, protecting them from contracting, developing and transmitting the diseases.

We’re in a waiting game now to know what donors will support and where the gaps are. That’s incredibly frustrating

The MDA approach has appealed to government donors, philanthropists and charitable fundraising groups as it offers excellent value for money, and uses funding to reassure drug companies that any donated medicines can be distributed effectively.

“One dollar invested leverages $26 in donated medicines,” says Thoko Elphick-Pooley, director of Uniting to Combat NTDs, an advocacy group. The broader benefits via improved schooling for children and their future economic contribution are still larger.

The UK’s department for international development initially championed the approach, boosting the country’s reputation as a global leader in providing a range of high-impact interventions at low cost. But the programme was scrapped this year after it was taken over by the Foreign and Commonwealth Office and the UK government cut its aid budget from 0.7 to 0.5 per cent of gross national income.

With existing donated drugs for MDA expiring, time is running out for their use — just as the annual peak season for infections gears up. Without fresh money to support their distribution, pharmaceutical companies are reluctant to donate fresh stocks.

“The crisis has shown up the structural faults in the system,” says Johannes Waltz, who oversees donations of praziquantel, provided by Merck of Germany, to treat schistosomiasis. He points to particular concerns in Nigeria, the Democratic Republic of Congo and Zimbabwe. “We can’t assess the losses and the stocks without any timely reporting,” he explains.

Several private funders, including the End Fund, The Children’s Investment Fund Foundation, Elma Philanthropies and the Bill & Melinda Gates Foundation, have stepped in to temporarily fill the UK funding gap, with a total of about £100m for the current year. But Bill Gates warns: “You never want to position yourself to fill in for [much larger government donors]. There’s no way we can match those cutbacks.”

“The UK government’s decision was devastating,” says Simon Bush, director of NTDs at the charity Sightsavers.

“My biggest worry is what happens now with river blindness and lymphatic filariasis. It feels as if whole countries are at risk of being abandoned if we can’t persuade new funders to come forward.”

Wendy Harrison, head of the Schistosomiasis Control Initiative tackling another NTD, points out that much of the stopgap funding is earmarked narrowly for drug distribution programmes, and will not cover the broader efforts the UK had supported to integrate them more closely into initiatives to strengthen health and sanitation systems. 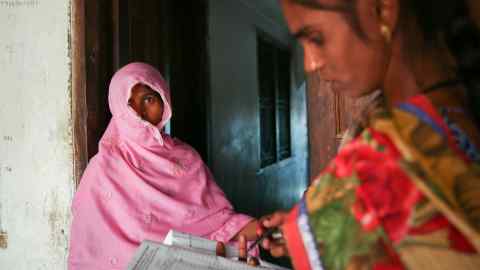 Some financial support may arrive too late to prevent further backsliding, she adds. “We’ve got a significant risk coming up for programmes especially in Niger and Liberia,” Harrison says. “We’re in a waiting game now to know what donors will support and where the gaps are. That’s incredibly frustrating.”

It is possible that aid cuts could spur affected countries to increase their own funding on the most neglected populations. But Harrison warns: “The Covid response has significantly depleted health systems. Countries have multiple calls on their time and resources and it feels as though they have mobilised as many resources as they can.”