Zero-carbon claims must be seen in context of repurposed stones and impact on mining, analysts say

When London-based jeweller Stephen Webster first met Dale Vince, founder of Skydiamond, in 2015, he was presented with a handful of brownish crystals. “I had them tested,” Webster says of the drab-looking lab-grown stones from the company based in the Cotswolds, central England. “They were 100 per cent carbon, but brown.”

Fast forward to this month, and Webster is launching his first lab-grown diamond collection — Stephen Webster x Sky Diamonds — using gem-quality, near-colourless diamonds. He is the first designer to create a collection with the British-grown gems.

Webster is quick to point out that he is not abandoning natural diamonds. “I couldn’t possibly stop using natural diamonds. They’ve been my life for 45 years. The Skydiamond collection will be pitched separately. We designed all the cuts of the stones, which has helped me to . . . separate it all. It’s a grown diamond, of course, but I’ve been able to follow this for seven years, so it’s got complete transparency for me. I’ve been to the factory in Stroud and watched them grow.”

Marketed with the slogan “Mined from the sky to protect the earth”, Skydiamond is one of a growing number of producers promoting their lab-grown stones as the most environmentally ethical choice. Along with US producers Diamond Foundry and Israeli company Lusix, Skydiamond cites its use of 100 per cent renewable energy to back up its claim of being not just carbon neutral but carbon negative.

Using the chemical vapour deposition (CVD) process, which employs various gases, Sky Diamond sources CO₂ straight from the atmosphere at its Stroud facility — but Vince is quick to point out it is not a huge volume. “It’s actually a tiny amount of carbon that can be stored in a one-carat diamond — about 4g,” Vince says. “But I see it as a practical alternative to natural diamond mining.”

Webster says of the figure: “It doesn’t matter that it only uses [four] grammes of carbon. It’s the fact that it’s completely green.” He adds: “I’m also very very keen on the progression the mined diamond industry is making, and needs to continue making.”

Diamond industry analyst Paul Zimnisky agrees. “As a larger industry, we are headed in the right direction, competing to see who can leave the smallest footprint on the environment,” he says. “However, the diamond with the smallest footprint is a recycled or repurposed diamond, and no one ever really acknowledges this.”

That is something Wing Yau, founder of New York-based jewellery brand Wwake, is keen to change.

Yau only uses repurposed diamonds, taken mainly from 1980s and 1990s-era jewellery, working with just two suppliers. “It’s really the only way I can feel truly comfortable about the stones I’m using,” she says. “The natural diamond industry is still controlled by seven big players. There are too few other options, and lab-grown stones isn’t one of them for me, regardless of the type of energy they use — which must be a huge amount.”

Diamond Foundry, one of the original lab-grown diamond producers, has long rejected claims that the amount of energy it needs to grow diamonds is unjustifiably high. An oft-cited figure is that it takes 250kWh to grow a one-carat diamond in a laboratory (by the CVD process), but Martin Roscheisen, Diamond Foundry chief executive, says this figure is out of date. “A decade ago, it was indeed 250kWh per carat,” he says. “But, through our iterative and compounding technology innovation, today it is about a tenth of this.” For perspective, 25kWh is less than the energy an average UK home would use in a day.

Diamond Foundry is building a new plant in Extremadura, south-west Spain, and a 300ha solar farm next door to power it. It is also planning to add power storage through second-hand electric car batteries (the global potential of which, analysts predict, could exceed 200 gigawatt-hours of storage by 2030). Diamond Foundry has stated that this $850mn project will eventually be producing 10mn carats of diamonds for both the jewellery and semiconductor industries.

News in-depthClimate change
Diamonds from thin air: the search for a carbon-neutral jewel 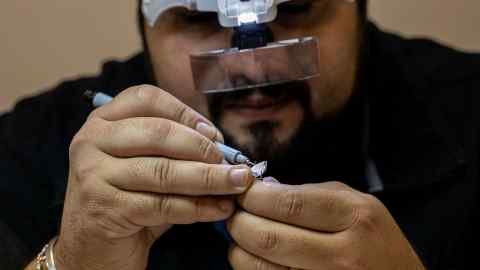 Lusix, which recently received $90mn of funding from luxury group LVMH and other investors, already runs one factory in Rehovot, near Tel Aviv, and will open a second, larger factory in nearby Modi’in later this year. It has trademarked the brand Lusix Sun Grown Diamonds and claims to be the first company in the world to grow diamonds by using only solar power.

Technically, Lusix buys all the energy produced by a solar farm nearby, which is fed into the national grid and powers its factory. But, because solar energy is only captured during daylight hours and storing it requires enormous batteries, and diamond growing reactors run constantly, it is not always solar energy that powers the factory.

Clarifying this, Daniel Kahn, Lusix vice-president of business development, says that “at all times, it is the grid that supplies the electricity. We just make sure that our dedicated solar field is putting more power into the grid than we are taking out.”

But Michael Liebreich, a clean energy and net zero consultant who is also an adviser to the UK Board of Trade, says: “Boasting about making diamonds with renewable energy is like boasting about serving organic caviar on the Titanic.”

He argues that “Mining and marketing a one-carat natural diamond emits about 120kg of CO₂. Rich people switching to zero-carbon diamonds would [make] a minuscule reduction in their carbon footprint — but at a cost of potentially devastating damage to mining communities. Meanwhile, each return flight to New York has a footprint around 10 times as high as that of a single natural carat diamond.”