Chernihiv picks up the pieces after Russian assault and blockade

We’ll send you a myFT Daily Digest email rounding up the latest War in Ukraine news every morning.

Oleg Bril’s high-rise apartment block in Chernihiv was ripped apart by a rocket fired by Russian troops last month. Looking up at its remains, Bril still wonders why they did it.

“I have no explanation. There are no military units here,” he said. “There are only civilians, and across the street a cardiology hospital and a kindergarten.” Shortly after he spoke, an ambulance crew with a stretcher pulled up to retrieve the remains of a woman from the rubble of an apartment block across the street.

Chernihiv, north of Kyiv, was besieged by Russian forces for more than a month and is the largest city to have been freed by Ukrainian troops. Nearly two-thirds of the city’s prewar population of 280,000 fled while it was under siege.

Those that remained are now taking stock of the damage the Russians inflicted on civilian buildings around the city, including residential blocks, hospitals, schools, a library, and the football stadium.

“This is a civilian infrastructure site,” said Olexander Lomako, Chernihiv’s regional governor, as he stood inside the stadium, whose grounds are scarred by bomb craters and littered with rocket fragments and broken glass, with seats concertinaed in the air.

“There was no military installation, no military sites around — just a sports school for children, a hall where our athletes had their training, and a library,” Lomako said. “It has all been destroyed now.”

Russian foreign minister Sergei Lavrov said early in the war that there were “no attacks on civilian infrastructure”. Throughout the war Moscow has justified strikes on civilian buildings such as hospitals by claiming that Ukraine’s forces were using them as bases.

“This is a deliberate tactic of the Russian troops, not something accidental,” he said.

As Russian troops have withdrawn from areas near Kyiv, much of the focus has been on evidence of human rights abuses in towns and cities that came under their direct control, such as the signs of war crimes aimed at civilians in towns similar to Bucha. But Ukrainian officials are also calling attention to the deaths and deep damage inflicted by Russia’s assault on the country’s civilian infrastructure.

The cost of Russian strikes on its cities and towns has been ruinous for Ukraine. This week the Kyiv School of Economics estimated the total economic losses since the beginning of the war at $564bn to $600bn or more, including $80bn of damage to physical infrastructure.

Sergii Marchenko, Ukraine’s finance minister, told the Financial Times that his country’s economy was under “great stress, in the very worst condition”, with government spending due to exceed revenues by $5bn to $7bn a month in April and May.

Chernihiv was the first city the invading forces hit after pushing south from Belarus towards Kyiv on February 24. Early in the war, they encircled the city and destroyed a bridge over the Desna river that left it surrounded.

For three weeks, officials say Chernihiv had no electricity, no water, and no communications. Some of its suburbs became battle zones.

About 700 people died during the fighting, according to city officials, who continued to maintain basic services including water distribution and waste removal. Doctors and medics worked in hospitals with no heating and missing windows.

“Even when the city was completely surrounded, under siege, the regional administration arranged the transportation of humanitarian assistance using boats” plying the Desna from the nearby town of Kolychivka, according to Dmytro Ivanov, Chernihiv’s deputy regional boss.

Zelensky last month signed a decree bestowing the honorific “hero city” — a term that was until now associated with Soviet-era second world war remembrance — on a handful of cities that have suffered the most during Russia’s invasion, including Mariupol, Kharkiv and Chernihiv.

In recent days Ukrainian authorities have allowed journalists to drive into the city under police escort after the Russians retreated from around Kyiv and Ukraine’s north over the past fortnight.

As they contemplate rebuilding ruined infrastructure, Ukrainian officials will face steep costs. According to the state roads agency Ukravtodor, in Chernihiv region alone 626km of roads were damaged and 16 bridges and overpasses destroyed.

Officials said they were preparing to clear and repair them with the aim of restoring traffic on the important M-10 route linking the city to Kyiv. For now, the journey from the capital requires bypassing destroyed bridges and stretches of motorway via crowded and bumpy two-lane roads.

Private citizens in the region are picking up the pieces after the Russians’ retreat.

In Novoselivka, a village on Chernihiv’s outskirts that was reduced to ruins during fighting between Russian and Ukrainian troops, Nina Koval, 62, said her house was hit by a shell on March 16. Her daughter lost part of her leg, which required amputation.

The following day another shelling attack killed her piglets and cows. A Russian soldier came through the village with a grenade launcher. “He fired on houses that were still standing and shot at our house,” she said, standing in its rubble. “Apparently they liked doing it. It was a good house.”

READ MOREWar in Ukraine: free to read
How Kyiv was saved by Ukrainian ingenuity as well as Russian blunders 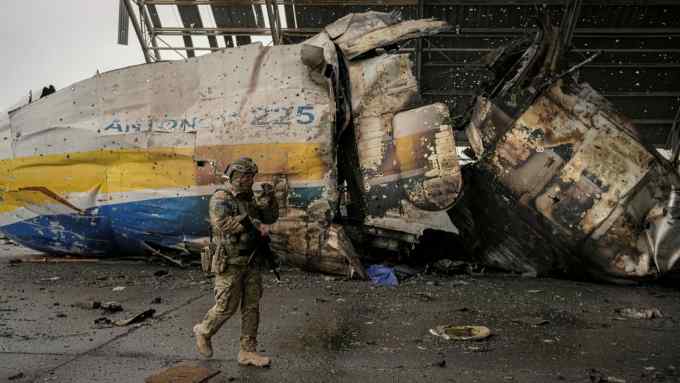