Happiness in a cushion, from a Gambian asylum seeker

If joy could be sewn and stitched with ruffles, it would be an In Casa by Paboy cushion

“Raspberry pink with mango-tree-green ruffle” and “Pompeii red with sandy-yellow piping” are but a hint of the riot of colour in the cushion-cover repertoire of In Casa by Paboy. It's a fitting burst of joy for a company that goes against the grain, and which was launched during the first Covid-19 lockdown in spring 2020 by a tailor-trained asylum seeker.

The cushions (€80-95) are hand-sewn by Gambian founder Paboy Bojang, and made to order in cotton sourced from local suppliers in Naples, where he is now based. On his Instagram page, Bojang welcomes colour suggestions, feedback on new designs and often reposts images of the cushions in their new homes round the world, where they turn sofas and chairs into pockets of vibrancy. He publicly thanks individuals whose colour recommendations make it into the permanent collection – the latest is a gorgeous Yves Klein blue and navy-blue combination – and the only thing followers are called out for is their loyalty. If happiness could be sewn and stitched with ruffles, it would be an In Casa by Paboy cushion.

It’s an interesting exercise to reconcile the very real cheer of the brand with the difficulties that led to its inception: having sought asylum in Italy for several years, Bojang launched In Casa by Paboy after issues with legal papers left him unemployed. “I want to focus on being creative,” he says. “But although I’ve got all the documentation… it’s really hard. I have to go to so many places, it makes it difficult to create something for myself.”

Bojang, 28, currently has a humanitarian protection permit and the right to stay in Italy. His status is hard-won: he took flight from the dictatorship in Gambia in 2013, spent two years attempting to cross the desert and the Mediterranean Sea, and then time in refugee camps and a year sleeping rough in Tripoli. The offer of somewhere to stay from a volunteer at the Naples refugee camp, the discovery of a dormant Singer machine and some vintage fabrics forgotten under a bed led to his newfound business.

He has since formed strong relationships with local shopkeepers who initially gave him offcuts and from whom he now buys fabric rolls, fringes, his signature red zips and pom-poms. “It was just a small thing,” he says humbly, “then I became friends with the neighbourhood and we took it from there.”

Next are plans for an expansion of the range. “It’s quite intense at the moment, but in the future, I want bedding, tablecloths, cushions for everything,” he says, pausing for a second before adding, “and duvet covers!” He also hopes to employ other migrants living in Naples. “I want to employ as many of my fellow immigrants as I can,” he says.

But for now, he is pleased that his designs are having a positive impact. “It’s good to bring people joy at such a difficult time”, he concludes. “When I send [the cushions] to everyone, they’re so happy. It makes me happy to give other people joy.” 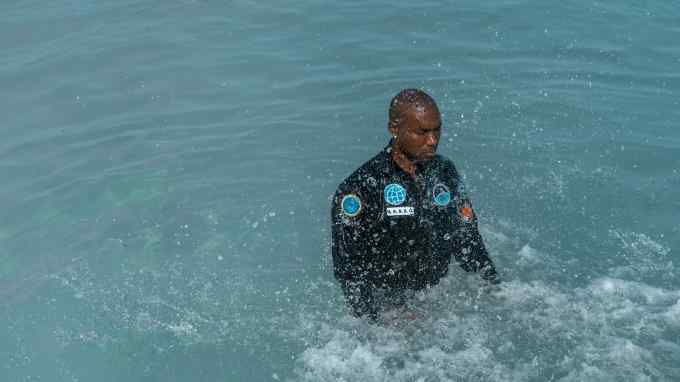