Exclusive: FT survey of banks and asset managers finds employment shift to EU is yet to happen

Brexit has failed to deliver a big hit to financial services employment in London, Financial Times research has shown, with international banks maintaining most of their staff since the vote to leave the EU and big asset managers hiring in the UK capital.

Initial warnings that tens of thousands of jobs would leave the City as a result of the 2016 Brexit vote have been drastically scaled back. An FT survey of 24 large international banks and asset managers found that the majority had increased their London headcount over the past five years.

Twelve overseas-based banks, which employed about 71,000 people in London five years ago, now have a reduced headcount of about 65,000. But most of the decline came from group-wide restructurings at Credit Suisse, Deutsche Bank and Nomura.

Nine of the world’s largest asset managers have ramped up hiring in the UK since the vote, with their total combined headcount rising 35 per cent to more than 10,000 employees over the period.

“There was a certain shift, but the magnitude has been relatively moderate,” said Frédéric Oudéa, chief executive of Société Générale. He said his bank had moved 300 people from London to Paris.

French rival BNP Paribas has increased its headcount in the UK. Japan’s MUFG has added a net 400 jobs in London. Goldman Sachs has gone up by about 900 staff in London since the end of 2015, even as it added 500 jobs in the EU, by hiring for its core businesses and new areas including consumer banking and cash management.

JPMorgan has kept its London headcount at about 11,000, while total UK staff numbers have grown about 2,000 to 18,000 as the bank hired in other locations including technology and operations hubs in Glasgow and Edinburgh.

The numbers in most cases are far different to companies’ original estimates, including Deutsche Bank and JPMorgan whose executives at one point said as many as 4,000 of their staff could leave London, and several other banks which suggested the numbers would be about 1,000.

“We were totally sticking our finger in the air,” said a former senior executive at one of the top banks. “Everybody said 1,000. They thought if they said hundreds, nobody would believe them.”

Vanguard, the second-largest asset manager in the world, and T Rowe Price, another US-headquartered asset manager, more than doubled their London workforce over the period to 600 and 575 respectively.

Invesco, which is based in Henley outside London, added about 295 staff to take its total UK headcount to 1,201, while Pimco, the biggest bond fund manager in the world, and Columbia Threadneedle also increased their London headcount.

The investment industry’s hiring spree is in stark contrast to predictions back in 2017, when UK fund managers said they expected that 16 per cent of asset management jobs based in Britain could move to other financial centres by the end of 2020. Only one respondent in a survey of 300 managers and investors by MJ Hudson, a London-based consultancy, said they expected headcount across the UK’s investment industry to rise by 2020.

The fund sector’s hiring spree — which has also been replicated in the EU — coincided with the rapid growth of the investment industry globally and increased regulatory requirements in the UK.

While asset managers have set up EU funds to be able to sell to European investors after Brexit, retail investment rules allow them to keep the bulk of their front-office investment functions in the UK.

Senior industry figures say that the ultimate cost to the City could be much higher depending on the final outcome of Brexit negotiations, and the potential for the EU to develop as a financial centre.

“The big question, of course, is how does capital markets union evolve, does Europe really come together and build it out?” asked Richard Gnodde, the London-based head of Goldman Sachs International, referring to long-running efforts to developer deeper capital markets rather than relying on bank loans as the mainstay of company fundings.

“If you moved even halfway between where we are now and where the US is in terms of capital markets penetration for financing and investment banks, when I look at our headcount in the US and our headcount here, you’d be adding thousands and thousands of people.”

However, he added that some of those jobs servicing the EU would be based outside the region in low-cost countries.

In the EU, the fragmentation of business between Paris, Frankfurt, Dublin, Amsterdam, Luxembourg and other centres makes it harder for any one to rival the cluster of services and skills in London but finance bosses generally believe that the EU will attract more jobs over the long term.

“The mistake that many people in London made was thinking about jobs moves as Dunkirk in reverse, where French fishermen would be picking up British bankers and taking them back to France,” said Nicolas Mackel, chief executive of Luxembourg for Finance, a public-private partnership to develop Luxembourg’s financial services centre. “This has not happened. Why? Because these things take time.” 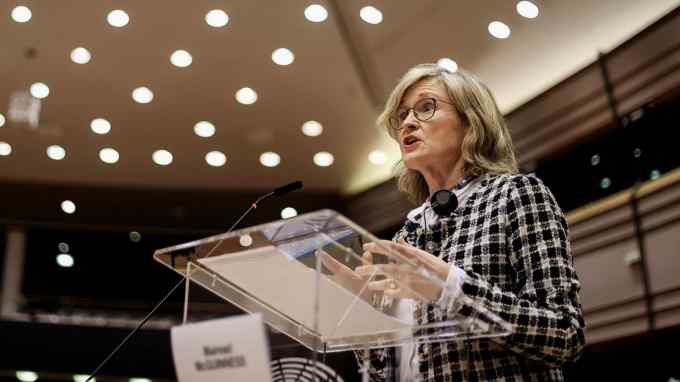