The British artist’s hyper-energised drawings were born in clubland. It’s no surprise they are dancing round the world

When you are drawing live, you don’t have time to be anyone but yourself: You don’t have time to think; you don’t have time to plan, you don’t have time to hesitate.” British visual artist Shantell Martin is reminiscing about the five years she lived in Japan, where she became immersed in the avant-garde VJing scene – where artists create work live. Her signature became sketching under an overhead projector while music blasted. She was eventually crowned a top-10 VJ in the world by DJ magazine in 2007, and her catalytic oeuvre has since led to collaborations with Kendrick Lamar, the New York City Ballet and brands from The North Face to Tiffany & Co.

Growing up in Thamesmead, south London, Martin, 42, stood out for being mixed-race among white siblings and classmates, but found the experience unexpectedly freeing. “I didn’t know it at the time, but that was my first passport,” she says; the dynamic has informed her creative style ever since. Camberwell College of Arts and Central Saint Martins propelled her to Japan in 2003 then New York in 2009. Here, savings depleted by immigration admin, and demoted to a realm where no one knew her name, Martin made the city her canvas, drawing on people and cars and putting on her own shows. She eventually caught the eye of the team at MoMA, who commissioned Martin for an event. A surprising cameo in American teen drama Gossip Girl amplified media attention, and today you can pick up works such as Shantell Martin neon editions ($2,400), porcelain candles ($500) and postcard books ($28) everywhere from The Whitney Museum to Barnes & Noble.

“Her work challenges the viewer to question aspects of their life, and see things from different perspectives,” says Conor Coghlan, co-founder and CEO of Hoek Home. The sustainable design firm has just launched an interiors collection with Martin, including tessellating wooden coasters ($195 for six) and furniture that doubles as large-scale wall hangings (from $495), which will be showcased at New York’s Museum of Arts and Design.

The more people pick up a pen, the better the world is

Martin’s work is mirrored in her personality; she is animated, especially when she dismisses my claim that I can’t draw. Her work, she says, is supposed to “encourage people, to inspire people, to ask people to pick up a pen. Because the more that we all go back to that gift that we’re given as children, which is absolutely free, the better the world is.” She pauses. “I think for all of us, we have this unique core that makes us ourselves. It can be represented through a style, a fingerprint, a visual identity, but you have to find it through a way of extraction versus going out to the world to be inspired.” Tips for this “extraction”? “Eat better, drink better, think better, surround yourself with more positive things so that the core is less cluttered and you can get to it quicker.” The theme was the subject of her 2020 TED Talk: “How drawing can set you free”. It has had more than two million views.

Now living between Jersey City and LA, Martin is expanding her practice; earlier this year she premiered her first choreographic work, Kites, for Boston Ballet. “I’ve been an artist thinking outside the box long enough that I don’t belong in the box. And if I want to choreograph a ballet, I can.” Her own typographic font, Shantell Sans, launches this autumn and she is the artistic director for the wine industry’s prestigious Golden Vine Awards this year. 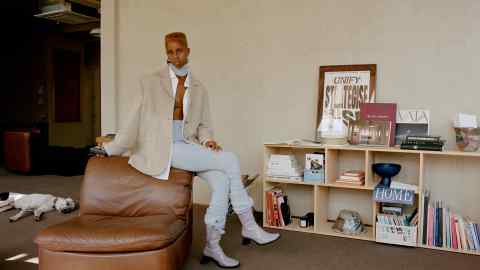 With so much going on, it’s surprising to find Martin still enthused about teaching. She has taught as an adjunct professor at NYU, and at MIT as a visiting scholar, while Columbia University recruited her in 2015 as a fellow at the Brown Institute of Media Innovation. Her signature is to set exercises for her students in order to help them to find their creative identity; in articulating her own artistic mission, she simply says: “It’s to have the most recognisable line on the planet. That comes with the freedom of creation and positivity. So, here’s a pen,” she says, picking one up from her desk and smiling. “Take that, and go and do the same.” 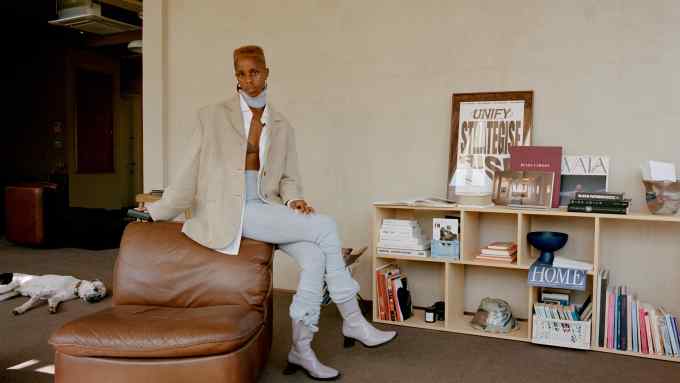