If you think the same, join us
The future perfect: HTSI autumn design special
See all 9 stories
How To Spend It Travel

How To Spend It in... Connecticut

The founder and creative director of the Object & Thing art fair, Abby Bangser, sums up the period appeal of New Canaan

I became interested in midcentury design when I was working at the Los Angeles County Museum of Art. The museum staged a show about modern Californian design and so I would go to see everything I could: houses by Rudolph Schindler and Richard Neutra, the landmark Eames House, basically anything of the period. When we moved back to the East Coast, I assumed we would live in New York, but we had a friend who lived just 49 miles north of the city, in New Canaan, Connecticut, and he encouraged us to come look. We discovered this stunning, lush area that was a hotbed for midcentury design and, especially, houses by the Harvard Five – a group of architects inspired by the Bauhaus that included Marcel Breuer – who all settled here in the 1940s.

I launched Object & Thing from here in 2019 as an art and design fair, though since the pandemic we’ve changed our format to working with artists and organising exhibitions in architecturally significant residences, such as the former home of architect Gerald Luss, known for his 1959 interiors of the Time-Life building.

The area still draws an eclectic, creative mix of people; the writer James Frey and natural skincare expert Tata Harper are both residents and friends. And while an old-fashioned sensibility remains – people sing carols between two town churches during the holidays, for example, and belong to garden clubs – there is also a really dynamic, 21st-century energy.

For architecture enthusiasts, one of the greatest draws is Grace Farms, an 80-acre public space designed by the Pritzker Prize-winning Japanese architecture practice SANAA. It opened in 2015 with the idea that people can collaborate for the common good. Past programmes have included a lecture by the Congolese Nobel Peace Prize winner Dr Denis Mukwege, a site-specific installation by artist Teresita Fernandez and an incredible performance piece by Carrie Mae Weems. Alongside a tea bar for reflection and an underground basketball court, you’ll also find Commons, a light-filled restaurant where they serve grilled cheese sandwiches with sliced apple and crispy bacon. I’m a vegetarian, but my son swears they’re incredible.

My other design must-see is Philip Johnson’s Glass House, which was the architect’s home and playground for experimentation. Built between 1949 and 1995, the property features all kinds of different buildings, from a sculpture gallery that’s flooded with natural light to Da Monsta, a postmodernist, sculptural building inspired by Johnson’s friend the artist Frank Stella. The Brick House, the one-bedroom Studio, and the Ghost House that uses chain-link material in a reference to Frank Gehry, all co-exist within a carefully considered landscape.

The quaint town centre has many treasures, but the Elm Street Bookstore is one of my favourites. It’s an old-school place where the staff still recommend their top picks. Afterwards I’ll pop next door to a café called Rosie for carrot muffins that are the size of softballs. The Glass House Design Store is also downtown, right across from the train station, and it’s the place to source iconic pieces such as Carl Auböck Egg paperweights and Alvar Aalto vases.

Whenever we have an overflow of guests, I have them stay at the historic Roger Sherman Inn. Built in the 1700s, it’s quintessentially colonial New England with just 15 rooms and a wood-panelled bar. The bar is a draw for locals and it’s a fun scene. The whole thing feels like being at your grandmother’s cosy house. One of the main meeting points in town – particularly on Saturday morning – is Zumbach’s Gourmet Coffee on Pine Street. The owner, Doug Zumbach, is considered a sort of mayor and he roasts and sells amazing blends. He hosts a vintage car series called Caffeine & Carburetors several times a year and it draws people from all over the north-east. It’s usually set in the centre of town but sometimes it will be in Waveny Park, once a grand private estate. The grounds of the park were partially designed by Frederick Law Olmsted Jr, who also designed the National Mall in Washington and the gardens at the White House.

This part of southern Connecticut is the perfect jumping-off point for other parts of the state, and a great side trip is to the picturesque town of New Preston, in Litchfield County. I always stop at The Smithy food market, where gorgeous baskets overflow with local produce, and the ice cream from nearby Arethusa Farm – especially the mint chip and sweet cream flavours – is worth a detour, too. For housewares and clothing I love Plain Goods, set over two floors in a historic building in the centre of town, and Privet House, just down the street, for baskets of every shape and size as well as Georg Jensen tabletop pieces.

When people are visiting, I tend to suggest Mayflower Inn in Washington for grander occasions, particularly in the summer when you can sit outside and have lunch overlooking the Shakespeare Gardens. April Bloomfield recently joined as its chef-in-residence. It’s also beautiful at Christmas with the tree fully decorated. Just across the state border in Amenia, New York, is Troutbeck, a historic property that has been revived as a hotel with an excellent restaurant, members’ programmes and a well-curated boutique. Another great place to stay is Graybarns on the Silvermine River in Norwalk where rooms are chicly minimalist: the Mercantile serves excellent avocado toast with pepitas and pickled red onion for breakfast.

One of the strengths of these parts of Connecticut, and of New Canaan in particular, is the mix of architectural styles; colonial buildings from the 1700s and 1800s sit seamlessly with midcentury masterpieces and make it a unique place. Another strength is the people, who are sensitive to traditional New England values and to always being neighbourly. These days, this counts more than ever. Whether you’re into art, gardening, literature or great food, it’s easy to find your passion here, because everyone is just really dug in. 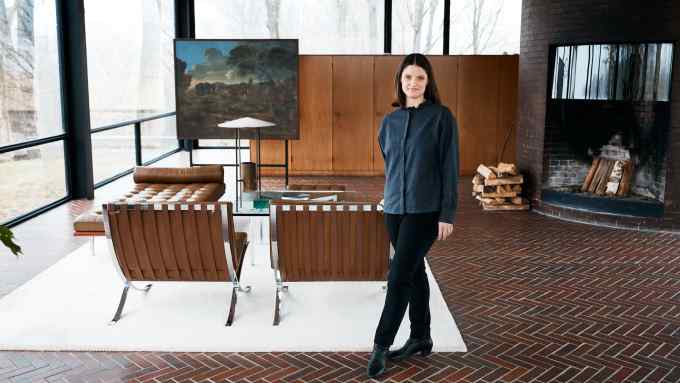