Adventure at the eco corral: sustainable cattle ranching in Colorado

Colorado’s San Luis Valley is a vast desert plain swaddled by the Sangre de Cristo Mountains to the east and the San Juans to the west.

Among the mountain valleys of the American west, it stands out for its size (about 120 miles by 70), its altitude (over 7,500ft), and a paradoxical combination of aridity and lushness. Fewer than eight inches of rain fall annually. But underground aquifers, fed by mountain meltwater, leave parts of the valley green for much of the year. This makes it a good place to raise crops such as potatoes; and also very attractive to wildlife, from herds of hundreds of elk to the great flocks of sandhill cranes that stop through on their spring and autumn migrations.

A steady southwesterly wind drives dust up the valley, where it is trapped in the uneven triangle where the two mountain ranges meet. There it forms the tallest sand dunes on the continent, some 700ft high. Just south of the dunes, pressed against the Sangres, sits the Zapata Ranch. It is a 103,000-acre spread that, over some 200 years, has been home, at various times and under various owners, to herds of commercial cattle, sheep and bison. It was here that I had a saddle-sore, sunburned, triumphant return to the lost days of my youth.

Before visiting Zapata, it had been almost 30 years since I spent any significant time on horseback. Back then, barely 21, I worked for six months on a cattle ranch in another high desert near Casper, Wyoming. I rounded up and branded cattle, fixed fences, delivered calves in the snow, cut alfalfa, drank whiskey and chewed tobacco.

This may evoke romantic images in some readers. I certainly hope so; parts of the experience exceeded any Hollywood portrait of the range. But I was a spectacularly incompetent cowboy – a clumsy rider and bad with machinery, even if capable of hard work. The other hands regarded me with friendly resignation (I could hold my own at the bar, at least). Still, that time was a turning point for me: an immersion in a completely new world that made me rethink who I was, and what the world was.

The mountain west has this effect on a lot of people. The thin air, boundless unpopulated spaces, the trees clinging to life... It all takes the mind in contemplative directions. There is a prairie existentialist in all of us.

The Zapata Ranch is an unusual hybrid. It is run by a for-profit company, Ranchlands, but sits on land owned by a charity, The Nature Conservancy. It takes guests, but is no dude ranch: 90 per cent of revenue comes from the herds of 400 cattle and 2,000 bison, according to its founder Duke Phillips III (he is called Big Duke, distinguishing him from his son Duke IV, who also works at Ranchlands, as does his daughter, Tess). Its goal is conservation, but the method is to work the land rather than leave it untouched. And it is not only the land that is conserved; Ranchlands aims to protect a way of life too.

“Ranchlands started as me jumping on an opportunity to own a business – just to survive and pay the lease!” Big Duke tells me. He founded Ranchlands at a ranch 100 miles to the north-east in 1999. The company now runs five properties across four states. A third-generation calf-and-cattle man, he’s had to change his business model in order to keep doing what he loves.

“The mission became: how can we take ranching into the future?” says Duke. “The average age is 65 for ranchers, young people are leaving for town, and absentee owners are coming in. People say, how come you’re so environmental, and how come you take guests, and teach young people leadership? It was just matching what I do well with the amenities the land offers. I opened myself up to anything that would work.”

Ranchlands does not only welcome guests. It sells leather goods, from bags to chaps; there are concerts at Chico Basin Ranch; they host artists and hold exhibitions; there are trips for hunters, fishermen and birdwatchers. All of this provides just enough financial diversification that the ranch can have fewer cows, so that even in dry years there is enough pasturage. Equally important, the young people who take care of the guests are also learning ranching and land management. The people who visit are learning too.

My first day, a young wrangler from Tennessee, Skye Challener, takes me for a long ride into the mountains above the dunes. She jumped horses competitively at university. She rides elegantly. I do not.

Seen from the mountainside, the dunes look like an alien landscape; the desert planet Tatooine in Star Wars. The mountain trail is rocky and often straight up and down, but my horse – a stout mare named Tick – is metronomically steady on her feet. The most striking thing for me is not the scenery, eye-popping as it is. It is the smell. The high forest of piñon-juniper has a resinous and evergreen odour, almost like eucalyptus, sweeter than the sagebrush that is so dominant on the plains further north.

Desert days change fast. Starting out after breakfast, it’s frosty, and I wear a jumper and a padded jacket. By lunch I am in a T-shirt, and we head down to the dunes. The sand is fine and the horses, uncomplaining, work hard to carry us through it. At the base of the dune there is a shallow stream which we follow home. I dismount stiffly that afternoon. No workout prepares 49-year-old legs for seven hours in a saddle. But I am exhilarated.

The mountain west takes the mind in contemplative directions. There is a prairie existentialist in all of us

There is a reason that conservation and ranching can work together. The west has been home to herds of big grazing animals – bison – for millennia. Their hooves turn the soil and their droppings fertilise it. When they roll on their backs, as they like to do, they leave depressions in the ground, called bison wallows, that hold water and encourage plant life.

Cows have many of the same effects. But there is a problem with cattle: they are amazingly lazy. Left on its own, a cow will often graze in a relatively small area, returning to the same spot before the grass has recovered. The grass tends to die as a result. So the ranchers’ job is to keep the cattle and bison moving from pasture to pasture. “If we can use fences to move livestock so they don’t return until the land is fully recovered – that is how you protect the land,” Duke explains. The animals “are a tool for conservation and a method for paying for conservation”.

This is my first time seeing a bison operation up close. Skye tells me, during a ride in the valley, that they don’t see very well, but their hearing and sense of smell are sharp. Approaching one group, we stay 300 yards away; a big bison can weigh up to 2,000lbs and outrun a horse. Several of the group turn to face us, and watch us until we move on.

A bison corral is an amazing thing if you’ve only seen cow set-ups before. Cows are gathered inside wooden constructions. Bison corrals have steel guardrails, of the kind that line highways, because the animals could simply rip a wooden fence apart with their horns. The wranglers walk about on elevated metal walkways, rather than sharing the corral with the animals, as they do with cows.

“Bison are really misunderstood, just like ranchers,” Duke says. “One school of thought is, they will kill you, maim you and do everything to destroy you. But it’s not true! They are just super-athletic. The other school is that they just walk across the land and everything flowers. It’s not like that either. It’s all about management.”

These huge, half-blind, ornery animals “are still teaching me things about how things were on the land and how they are changing”, he says.

The ranch itself is a simple wooden structure, surrounded (as so many western ranch houses are) by a grove of cottonwood trees, blazing yellow in the fall. There is a large dining area, a cosy den and comfortable but plain rooms. “We’re not luxury and that’s not what we say we are,” says Kate Matheson, who manages Zapata. “Or rather, we are luxury in the experience. This is about immersing yourself in this environment and being open to it.” Matheson is a transplanted Englishwoman. She worked in magazines in London but, she says, it was not the life for her. “We don’t want a spa. There is no TV and the WiFi is spotty. We want to hike, we ride horses, we want to see bighorn sheep or 500 head of elk. And then we want to go to bed early.” She is right about that. After my first day’s ride, I make it to 8:15pm, and sleep 11 hours.

Matheson says the ranch has been at capacity during the Covid crisis (we take our meals outside, and masks are worn religiously) and guests have driven sometimes thousands of miles for a holiday that is outdoors and naturally socially distanced: “We have been the answer to what everyone wanted.” The staff have felt blessed too. “We have a wonderful little pod,” she adds. “It is testament to this lifestyle choice – fresh air, space, something to keep our hands busy, friends, animals.”

The Zapata team is mostly people in their 20s – and this year, mostly women. Kate says they select young people who love the outdoors and working with animals, and are passionate about education and conservation. Clearly the staff are chosen for cheerful temperaments, too; the place brims with bonhomie.

There is one area where Zapata definitely is luxury: the food. Breakfast and lunch are big, with provisions coming almost exclusively from the valley. Mexican seasonings feature prominently – the chef, Chase, is a Colorado native who takes pride in his roots in that country. Being outside stimulates the appetite, but I had what I think is the best pork chop of my life at Zapata, served with salsa macha and raw onions. The second night, it was rib of the ranch’s own beef over polenta.

“Every time I come here I have to look at those mountains and the dunes,” Duke tells me. “I just look, and I’ve been doing this for 20 years.” The morning I am to leave, I peer out the window towards the dunes – and see a whiteout. Four inches of snow have fallen overnight, and the highway to the Colorado Springs has been closed. I am snowed in, and deliriously happy.

Robert Armstrong was a guest of Zapata Ranch, from $510 per night full-board, three nights’ minimum stay

READ MOREWellbeing and fitness: six awesome adventures on horseback
Inside the elite world of international showjumping 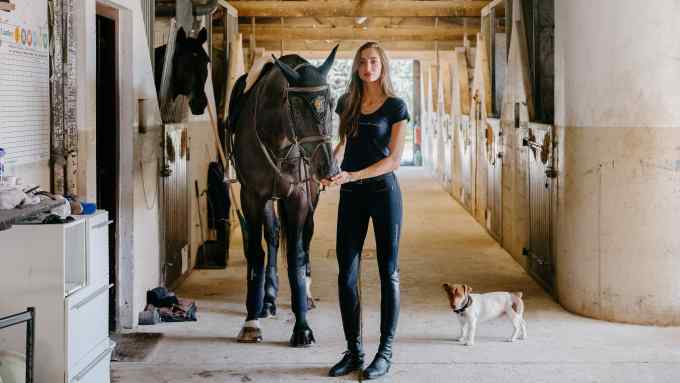