TV as kinetic artwork – and other spectacular screens

A borderline philosophical question: when it comes to televisions, how big is too big? We’ve seen screen resolutions increase to 4K and then 8K, but these can only be fully appreciated by the human eye if you’re either sitting stupidly close to the television, or the television itself is gigantic. So a procession of massive TVs have inevitably lumbered onto the market (LG unveiled a 325in monster not so long ago) that pose two pressing questions: a) where to put them, and b) whether you want your domestic life dominated by an enormous black rectangle in scenes faintly reminiscent of 2001: A Space Odyssey.

Austrian firm C Seed anticipated this many years ago, and solved the conundrum by embedding the television in the floor. At the press of a button, a black column would rise up and unfold into a stunning MicroLED display. Then, when you’d had your fill of Spider-Man: Into the Spider-Verse, it would neatly fold away again. The initial concept was the result of a collaboration between C Seed and Porsche, and it won a coveted Red Dot Design Award. The main drawback with original models was the amount of structural work required to install them in your living room, or indeed your superyacht.

Its hinges – and its purpose – are hiden from view

Enter the N1, a preposterous but glorious kinetic artwork that sits there looking enigmatic until you command it to unfold into a 103in, 137in or 165in television, depending which size you’ve chosen. Designer Stefan Pani has created an object that in no way reveals what it is until activated; as a result, its hinges – and its purpose – are completely hidden from view, prompting chin-stroking from onlookers. When fully unfolded, a calibration system ensures that the “creases” are invisible and the joins seamless.

For those of us who would love to have a big screen at home but resent the space it would take up, the N1 is a conceptual triumph that demands to be scaled down. But for now, it’s a massive hunk of aviation-grade aluminium alloy that weighs over one tonne. You may need some assistance getting it up the stairs. C Seed N1, from €180,000

Helsinki-based Varjo is named after the Finnish word for shadow, a crucial element of the very best VR imagery. The firm’s quest to produce the highest-quality headsets has, thus far, confined its products to niche business applications, but the Aero has been pounced upon by VR enthusiasts, seduced by its human-eye resolution, eye-tracking technology and lightweight form with active cooling. Yes, you will also need a very high-end PC, but the Aero’s rendering of Steam VR games, from Beat Saber to Half-Life: Alyx, is breathtaking. Winner of Best Headworn Device at the annual AR/VR Auggie Awards, it’s the most sumptuous consumer VR headset you can currently get your hands on. Varjo Aero, €1,990

Raised to the power of 3D

3D is a sporadically enchanting medium. From the lurid films of the 1950s to more recent coverage of football and tennis, we’ve obediently gasped in amazement before quietly reverting to 2D. The stereoscopic laptop, however, has a wow factor that may endure. By tracking eye movement and displaying a different image for left and right, it creates an effect where you feel as if you could reach out and touch 3D-modelled objects. Side-by-side 3D videos are rendered impeccably, 2D images and videos are given additional depth, and 3D gaming without a headset becomes a reality. No red and green cellophane specs required. Acer ConceptD 7 SpatialLabs Edition, £3,499.99, acer.com

With a boasted setup time of six seconds, the Halo+ is designed for those who equate the word “projector” with “hassle”. In truth, you’ll be waiting more than six seconds before watching anything, but you can switch it on, point it at any surface from any angle, and it’ll give you a perfectly rectangular frame in a trice. As it is small, light and battery powered, you could head down to the beach and project a 100in image from a USB stick onto a nearby cliff face should you wish. In a domestic setting you’re more likely to connect it to WiFi and download a familiar array of Android apps such as Netflix and Amazon Prime. It’s bright, loud and, for a projector, it looks refreshingly demure and understated. Xgimi Halo+, £749

Smart spectacles gained a bad reputation rather quickly. Early adopters of Google Glass found themselves confronted, assaulted and barred from venues on suspicion of surveillance. The Nreal Air, however, sidesteps those problems by having no camera, just a built-in display that lets you translate the screen of your phone or tablet directly into your line of vision. A mildly irritating USB cable runs from the left arm of the specs to your device, but they’re light (79g), have discreet speakers built in, and the experience of watching films on a huge virtual screen while on the train is extraordinary enough to warrant the price tag. Better still, you won’t get punched in the face, probably. Nreal Air, £400

HTSI
Five gadgets that will take you back to the future 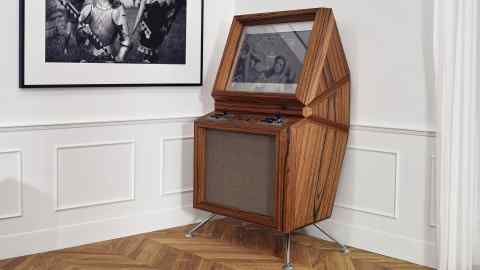